In 2008, California Common Cause led a coalition that drafted and passed the historic Voters First Act, which took a significant step toward ending gerrymandering in California.

This ballot initiative stripped California legislators of the power to draw state legislative districts and created the Citizens Redistricting Commission (CRC). In 2010, we won again when Californians passed a separate initiative, the Voters First Act for Congress, that added congressional districts to the CRC’s mandate. The CRC is now a national model for redistricting reform that is the basis for proposals that will be on the ballot in several states this November.

What is the Citizens Redistricting Commission (CRC)?

How are commissioners selected? 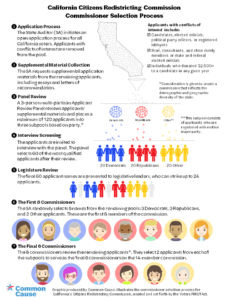 How does the CRC draw district lines?

The CRC is forbidden from drawing districts to benefit a party or candidate and cannot consider the addresses of incumbents or candidates. All commission deliberations must take place in public hearings and district lines must be drawn based on the following ranked criteria:

For more information on the CA CRC, visit their website at www.wedrawthelines.ca.gov.