Democracy in Your Community: Setting the Stage for Fair Representation in California’s Cities and Counties

As we move into 2021, the once-in-a-decade task of redrawing political districts is well underway in California, for all districts from Congressional districts down to water board districts. The 2020 California Citizens Redistricting Commission (CRC) was seated in August for its second iteration. This independent people’s commission is charged with drawing California’s Congressional, state legislative, and Board of Equalization districts. The CRC is already hard at work planning their work for next year. Their work carries huge weight, as it will determine how well California’s communities are represented in state and federal government for the next decade. California Common Cause championed the independent commission model, which put the power of redistricting in the hands of community members instead of elected officials. The CRC was ultimately created by California voters through the approval of Proposition 11 in 2008.

Local jurisdictions in California, namely cities and counties, are also preparing to redraw their districts. This process is just as high stakes as the state redistricting process. How the lines are drawn at the local level will decide who will be represented on city councils and county boards of supervisors, which affects critical policy decisions around housing, environmental justice, health services, policing, and more. It also determines who enters the pipeline of leadership and is in the next generation of state and federal leaders in the state of California.

There are several major changes taking place with local redistricting this cycle. For one, the number of jurisdictions that will have to redistrict has almost tripled compared to the 2011 cycle. Many cities transitioned from at-large to by-district elections over the last decade, meaning roughly 500 local jurisdictions will need to adjust their district boundary lines. New state requirements will also reform the redistricting process this cycle. AB 849, co-sponsored by California Common Cause and other state advocates, requires cities and counties to host multiple public hearings on redistricting, with additional accommodations for language minority communities, allowing communities to participate in the process. For the first time, local jurisdictions will also be required to redraw their districts according to ranked redistricting criteria, which prioritize keeping neighborhoods and communities intact. They will also be restricted from partisan gerrymandering.

There is another notable difference in next year’s redistricting cycle: the increased use of independent redistricting commissions, which are empowered to enact new maps independently of the local legislative body. California Common Cause supported the creation of these commissions in several areas to empower local communities to redraw their own districts and remove elected officials from a process where they often — if not always have a vested interest in the resulting district maps. Many of California’s largest cities and counties will have an independent commission redraw their district lines for the first time this cycle: Sacramento, Long Beach, Oakland, Berkeley, Chula Vista, Escondido, San Diego City and County, Los Angeles County, and Santa Barbara County. Over the course of this past year, these jurisdictions sought local residents to apply to serve. We set out to support them by creating large, diverse applicant pools of qualified residents who are committed to fair representation in local government. 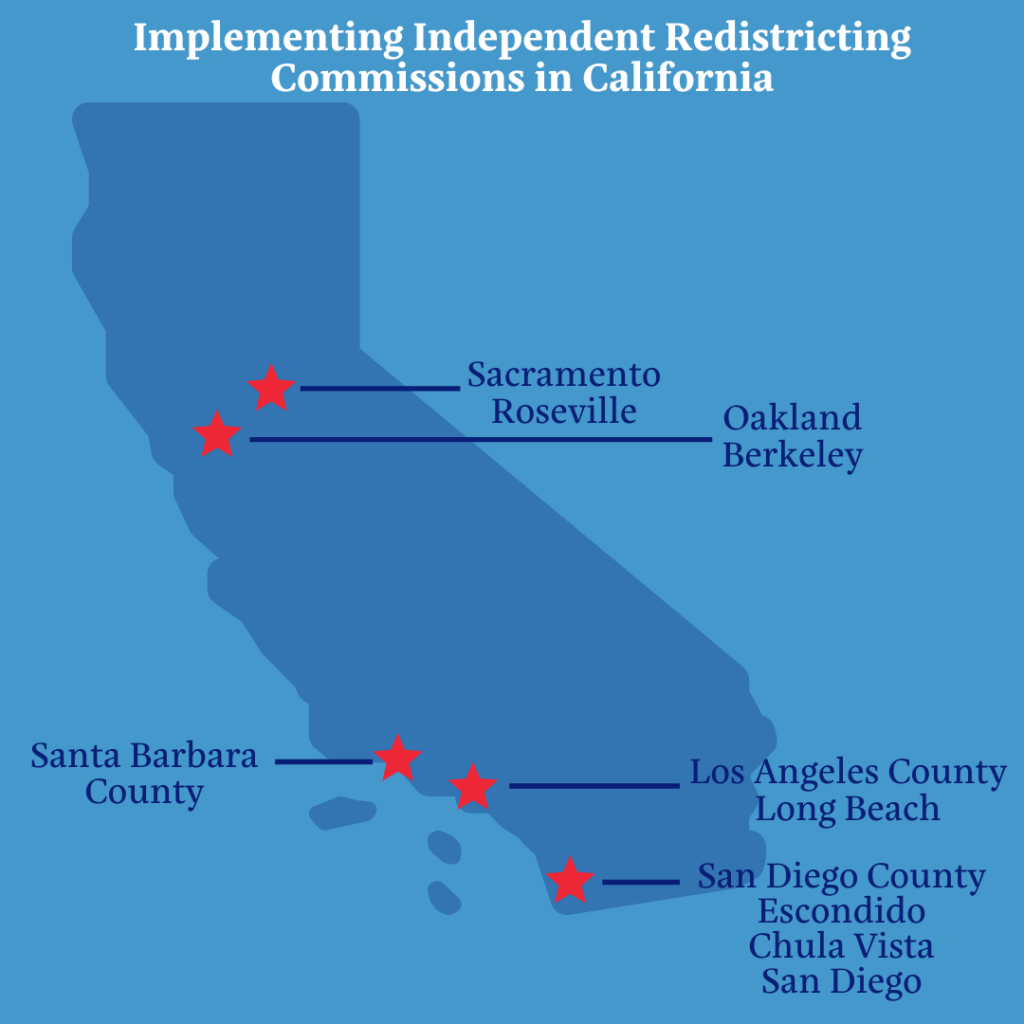 While the task of seating a commission seems straightforward, there were some challenges with recruitment. Many of the jurisdictions had never recruited an independent redistricting commission before. While the governing charter provided steps for narrowing and selecting commissioners from the applicant pool, the recruitment strategy was left to the local jurisdiction to develop. The COVID-19 pandemic also posed a significant challenge. It not only made many Californians’ personal plans for 2021 uncertain, but also served as a barrier to in-person outreach, leaving local jurisdictions to rely on digital outreach almost exclusively.

California Common Cause has been committed to making this process a success because of the high-stakes nature of the redistricting process. We believe that an independent redistricting process that results in fair districts begins with a qualified, demographically representative commission that is committed to fair representation. To achieve this goal, we partnered with cities and counties to share our best practices for recruitment and support outreach efforts to ensure that a diversity of voices is included on redistricting commissions across the state.

In addition to making the application process accessible, we initiated efforts to promote the opportunity to serve on the redistricting commission through various methods. With our partners, we created customized graphics formatted for Twitter, Facebook, and Instagram for ten cities and counties, encouraging residents to apply to serve on their local redistricting commissions. We shared these graphics, along with outreach email templates, with our network of over 40 state and local partners to reach a wide network of individuals and recruit an applicant pool as large and diverse as possible. We also co-hosted six webinars with local governments and nonprofit partners to share more about redistricting commissions and to give residents an idea of what is involved with serving on one. These webinars generated awareness and interest in redistricting commissions and gave residents concrete steps about how to get involved. The impact of these webinars is most clear in Los Angeles County – the graphic below indicates the number of application requests received on a daily basis. 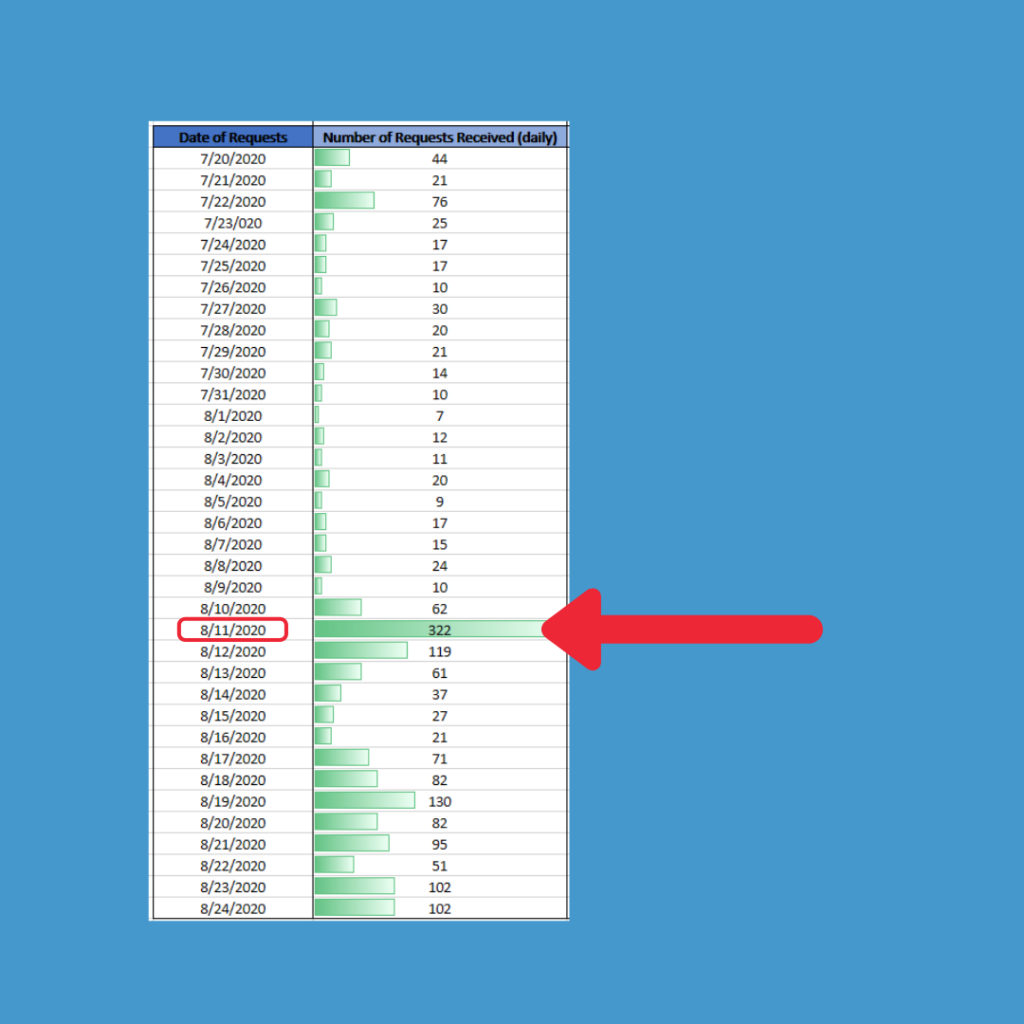 On August 11, 322 requests for LA County’s online application for the redistricting commission were made, the highest number of application requests made on a single day.

The day with the highest number of requested applications was August 11, the same day that California Common Cause hosted its first outreach webinar in partnership with NALEO Educational Fund and the LA County Registrar-Recorder/County Clerk, the county department tasked with recruiting residents to the LA County’s commission.

Another practice that we advocated for was transparency about the number of applications received and the demographics of the applicant pool over the course of the application period. These updates from local governments gave us an idea of how well recruitment was going and whether any additional outreach was needed to encourage residents from specific communities to apply before the application deadline. All jurisdictions worked with us in providing this information, which gave us insight as to how outreach was going. In Chula Vista and San Diego, information about applicant numbers told us that we needed to recruit more Latino residents to serve on the commission. In response, we reached out to local news outlets, partners, and even past commissioners, to help raise awareness about the importance of the commission. Chula Vista ultimately had 24 Latino applicants to their commission, constituting 53% of the entire applicant pool. As a result, the Redistricting Commission has the strongest Latino representation of any other commission in the state.

As 2020 comes to a close, community members across the state are already in the driver’s seat, ready to lead the redistricting process in many of our largest cities and counties. California Common Cause is proud to have led efforts to recruit qualified, diverse commissions across the state, during a year of incredible instability and uncertainty for many Californians. One of our city partners called our partnership “integral to the success of this year’s 2020 Redistricting Commission Application process”. As a result of our collective efforts, including the work of our partners and local jurisdictions, over 2,200 California residents submitted an application to serve on a local redistricting commission in California. And while just a handful of those applicants ultimately were selected to serve, we believe we’ve planted the seeds for widespread community involvement in the local redistricting process. This engagement will lead to higher quality maps on the city and county level and will set the stage for fair representation for the next decade to come.

Working to Ensure Independent Redistricting Commissions: Something to Feel Good About