A step closer to getting big money out of politics

Thank you Maui County Council, under the leadership of Policy and Intergovernmental Affairs Chairman Mike Victorino, for passing Resolution 15-124 “Requesting Maui County’s Congressional Delegation to Support an Amendment to the United States Constitution to Permit Congress and the States to Regulate the Influence of Corporate Power on the Political System”.

This resolution shows our County Council’s support of overturning the Citizens United v. FEC Supreme Court decision, which made it legal for corporations and other special interests to spend unlimited amounts of money to influence elections, as long as they are “uncoordinated” with candidates. 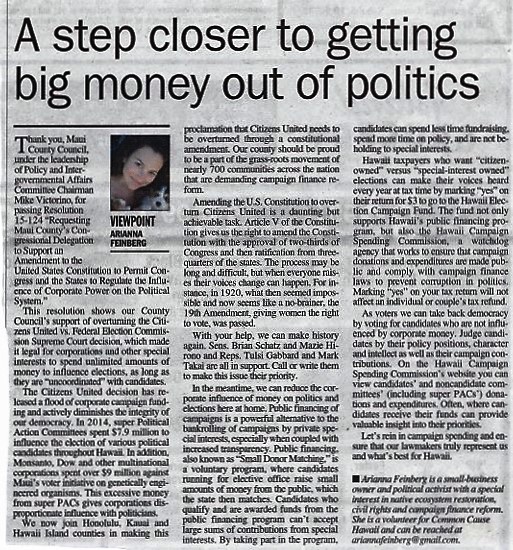 The Citizens United decision has released a flood of corporate campaign funding and actively diminishes the integrity of our democracy. In 2014, super Political Action Committees spent $7.9 million to influence the election of various political candidates throughout Hawaii. In addition, Monsanto, Dow and other multinational corporations spent over $9 million against Maui’s voter initiative on genetically engineered organisms. This excessive money from super PACs gives corporations disproportionate influence with politicians.

We now join Honolulu, Kauai and Hawaii Island counties in making this proclamation that Citizens United needs to be overturned through a constitutional amendment. Our county should be proud to be a part of the grassroots movement of nearly 700 communities across the nation that are demanding campaign finance reform.

Amending the U.S. Constitution to overturn Citizens United is a daunting but achievable task. Article V of the Constitution gives us the right to amend the constitution with the approval of two-thirds of Congress and then ratification from three-quarters of the states. The process may be long and difficult but when everyone raises their voices, change can happen. For instance, in 1920, what then seemed impossible and now seems like a no-brainer, the 19th Amendment, giving women the right to vote, was passed.

With your help we can make history again. Senator Schatz, Senator Hirono, Representative Gabbard, and Representative Takai are all in support. Call or write them to make this issue their priority.

In the meantime, we can reduce the corporate influence of money on politics and elections here at home. Public financing of campaigns is a powerful alternative to the bankrolling of campaigns by private special interests, especially when coupled with increased transparency. Public Financing, also known as “Small Donor Matching,” is a voluntary program, where candidates running for elective office raise small amounts of money from the public which the state then matches. Candidates who qualify and are awarded funds from the Public Financing program can’t accept large sums of contributions from special interests. By taking part in the program, candidates can spend less time fundraising, spend more time on policy, and are not beholden to special interests.

Hawaii taxpayers who want “citizen owned” versus “special-interest owned” elections can make their voices heard every year at tax time by marking “yes” on their return for $3 to go to the Hawaii Election Campaign Fund. The fund not only supports Hawaii’s public financing program, but also the Hawaii Campaign Spending Commission, a watchdog agency that works to ensure that campaign donations and expenditures are made public and comply with campaign finance laws to prevent corruption in politics. Marking “Yes” on your tax return will not affect an individual or couple’s tax refund.

As voters we can take back democracy by voting for candidates who are not influenced by corporate money. Judge a candidate by their policy positions, character, and intellect as well as their campaign contributions. On the Hawaii Campaign Spending Commission’s website you can view candidates’ and non candidate committees’ (including Super PACs’) donations and expenditures.  Often, where a candidate receives their funds can provide valuable insight into their priorities.

Let’s reign in campaign spending and ensure that our lawmakers truly represent us and what’s best for Hawaii.

Arianna Feinberg is a small-business owner and political activist with a special interest in native ecosystem restoration, civil rights and campaign finance reform. She is a volunteer for Common Cause Hawaii and can be reached at ariannafeinberg@gmaill.com.

Only real, live people should have say in our elections

The Executive Director will lead efforts in all areas of the state organization. These areas include fundraising, grassroots organizing, diverse coalition building, research, policy analysis, communications, advocacy, litigation, and any other activities that promote the Common Cause agenda at the state and national level. If you click on the button below, the details and application instructions will be downloaded to this website. You can access those by clicking on the small circled arrow icon in the upper right on this page.