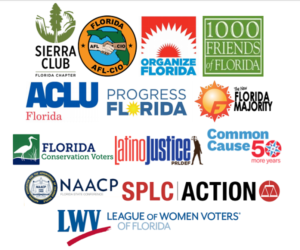 Common Cause Florida, the League of Women Voters of Florida and 11 other groups today urged Florida Governor Ron DeSantis to veto SB 1794, a bill that would make it harder for citizens to propose amendment to the state constitution.

“Our government is supposed to be ‘of the people, by the people, for the people’ and yet our Legislature is making it harder for the people to have their voices heard,” said Anjenys Gonzalez-Eilert, Executive Director of Common Cause Florida. “The changes the Legislature passed last year at the eleventh-hour were bad enough: citizens shouldn’t have to pay $6.5 million to $8 million to hire professional signature gatherers to get a constitutional amendment on the ballot.  The changes in SB 1794 would make it ever harder and more expensive for Florida’s citizens to amend our own constitution.”

“In the past 50 years, there have been only 38 citizen initiative amendments on the ballot – and more than 70% of those have passed, usually by high margins,” Gonzalez-Eilert said. “Citizens have led the way on fair districts, in 2010; restoring voting rights, in 2018; water and land conservation, in 2014; and medical cannabis, in 2016. These were, obviously, all areas where people didn’t feel like their voices were being heard by the Legislature – so voters sought an amendment by citizens’ initiative. SB 1794 would make it even harder, and more expensive, for citizens to do that in the future.”

“Floridians’ determination to have their voices heard – even in the midst of a public health emergency – was clearly shown by the turnout in last week’s election. We urge Governor DeSantis to remember who our government is supposed to serve, and to veto SB 1794,” Gonzalez-Eilert said.