Panama City, FL – A coalition of Florida and national voting rights advocates urged Florida Secretary of State Laurel M. Lee, Bay County Supervisor of Elections Mark Andersen, and other Florida officials to expand voting access for African-American and low-wealth voters in Panama City ahead of the March 17, 2020 Presidential Preference Primary Election. The groups’ letter identifies serious racial disparities in Early Voting access in Panama City, as well as other barriers to voting access for African-American and low-wealth voters, many of whom continue to face difficulties recovering from the devastation of Hurricane Michael, which made landfall as a Category 5 hurricane on October 10, 2018.

A November 2019 Executive Order issued by Florida Governor Ron DeSantis authorizes Supervisor Andersen to “expand[] early voting” in Bay County so that “the early voting sites are geographically located so as to provide all voters… an equal opportunity to cast a ballot.”

Despite this requirement of “equal opportunity,” Glenwood Community Center – the lone polling place in the largest African-American neighborhood in Panama City – will only be open for one day of Early Voting under the current plan. Five other polling places located in predominantly white neighborhoods in Panama City are planned to be open for eight days of Early Voting.[1]

The letter presented a detailed analysis, conducted by the Lawyers’ Committee for Civil Rights Under Law, of polling place locations, hours, and accessibility, demonstrating that the areas with the highest concentration of African-American voting age population will not have equal access to voting under the current plan.

“African-American voters in Panama City deserve an equal opportunity to cast their vote in the March 17 Primary Election, and all future elections in 2020,” said Ryan Snow, Legal Fellow with the Voting Rights Project of the Lawyers’ Committee for Civil Rights Under Law. “There is simply no excuse for Glenwood Community Center to be open for just two total days while vote centers in majority white neighborhoods will be open for nine days.”

“It is unfortunate that in 2020 we are still fighting for equal access to the vote,” said Adora Obi Nweze, President of the Florida State Conference of the NAACP. “We urge Supervisor Andersen to act now to make sure all Panama City voters can participate equally in this and future elections.”

“The letter requests something quite simple: additional early voting days to enforce the Governor’s mandate that all Bay County voters, regardless of race or income, have an ‘equal opportunity’ to vote,” said Nancy Abudu, Deputy Legal Director for the Southern Poverty Law Center. “The current status quo is totally unacceptable and penalizes voters for an act of nature of which they had no control and yet from which they still suffer the effects. We expect Bay County to uphold the law, represent the values of true democracy, and protect the fundamental right of its citizens to vote.”

“Voting is the fundamental right upon which all our civil liberties rest. State officials have a duty to our Constitution to ensure all eligible Florida voters have fair and equitable access to the ballot box,” said Daniel Tilley, legal director of the ACLU of Florida. “There should be no racial disparities in voting access for any election. All Bay County voters deserve equitable access to early voting.”

In addition to the lack of Early Voting access, the letter showed that several of the areas with the highest concentration of African-American voting-age population are more than a thirty-minute walk away from any of the proposed sites, with some up to an hour away. This is particularly troubling given that the only form of public transportation in Panama City, the Bay Town Trolley line, currently does not operate on Sunday, when many African-Americans choose to vote.

“Democracy works better when more people participate,” said Liza McClenaghan, Common Cause Florida State Chair. “It shouldn’t be harder for some groups to vote than others. The current plan for voting locations creates unnecessary barriers to voting for African-American and low-wealth communities. The plan needs to be changed, to make sure the election reflects the will of all the people in the county, not just the privileged ones.”

“This is perfect example as to why it’s so important to require that local election officials establishing vote centers conduct a racial impact analysis and solicit community input for feedback before finalizing plans on locations, days, and hours,” said Brad Ashwell, Florida State Director for All Voting Is Local.

Shortly before the November 2018 election, many of the same organizations – the Florida State Conference of the NAACP, Common Cause Florida, ACLU Florida, All Voting is Local Florida, NAACP Legal Defense & Educational Fund, Southern Poverty Law Center, Advancement Project, and the Lawyers’ Committee for Civil Rights Under Law – sent several letters to Supervisor Andersen urging his office to keep Glenwood Community Center open for voting on Election Day, instead of just for Early Voting. Now in 2020 the situation is repeating itself – with the same discriminatory impact on African-American voters.

Click on map for higher resolution version, which may be used (with attribution): 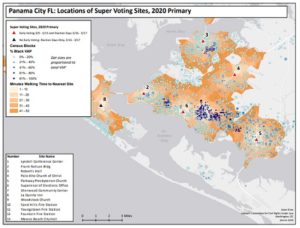