Shucking the Bucks: Another Record Harvest for Nebraska Lobbyists

For nine years, Common Cause Nebraska has compiled public records to document the growing wealth of the lobby and expose the influence of special interest money in politics. We continue to advocate for a two-year break before legislators can become lobbyists, ending in-session fundraisers and more transparency from both lobbyists and the special interest groups on how they influence lawmakers.

Each year we have issued this annual report on lobbying expenses, it has set a new record for the amount of money wealthy special interests are willing to spend to influence state lawmakers who make decisions that impact all Nebraskans.

At Common Cause Nebraska, we stand in this moment with everyone impacted by the coronavirus here at home and around the world. It is in moments like this that politics-as-usual contrasts starkly with good government. Every Nebraskan should understand how their tax dollars are being spent and who is influencing those decisions.

Last year, special interest groups hired lobbyists to work the capital for $17.9 million while lobby expenditures reached $19.3 million, an increase by more than $1.5 million from the previous year, states the 2020 report “Shucking the Bucks: Another Record Harvest for Nebraska Lobbyists.”

“In Nebraska’s unicameral legislature, special interest groups and other entities called “principals” pay lobbyists to advance their agendas,” said Jack Gould, issues chair of the Common Cause Nebraska board and author of the annual lobbyist report. “Buying influence with our 49 senators costs money and lobbyists who spend the most on entertainment, gifts and tickets have better access to lawmakers than everyday voters. Our voices are eclipsed by lobbyists wining and dining our policymakers.”

We are asking that Nebraskans refuse to accept politics-as-usual in 2020 and demand that every candidate for public office is held accountable for decisions that take public money and put it in private hands. The wealthy special interests make their agenda clear in these pages — just follow-the-money. Come the November 2020 presidential election, we the people have the power and we will determine what our next government looks like. Make sure the lawmakers you vote for strengthen the people’s voice in our government.

Common Cause Nebraska continues to be a nonpartisan nonprofit government watchdog, but it is the people of Nebraska who must hold our public officials accountable. 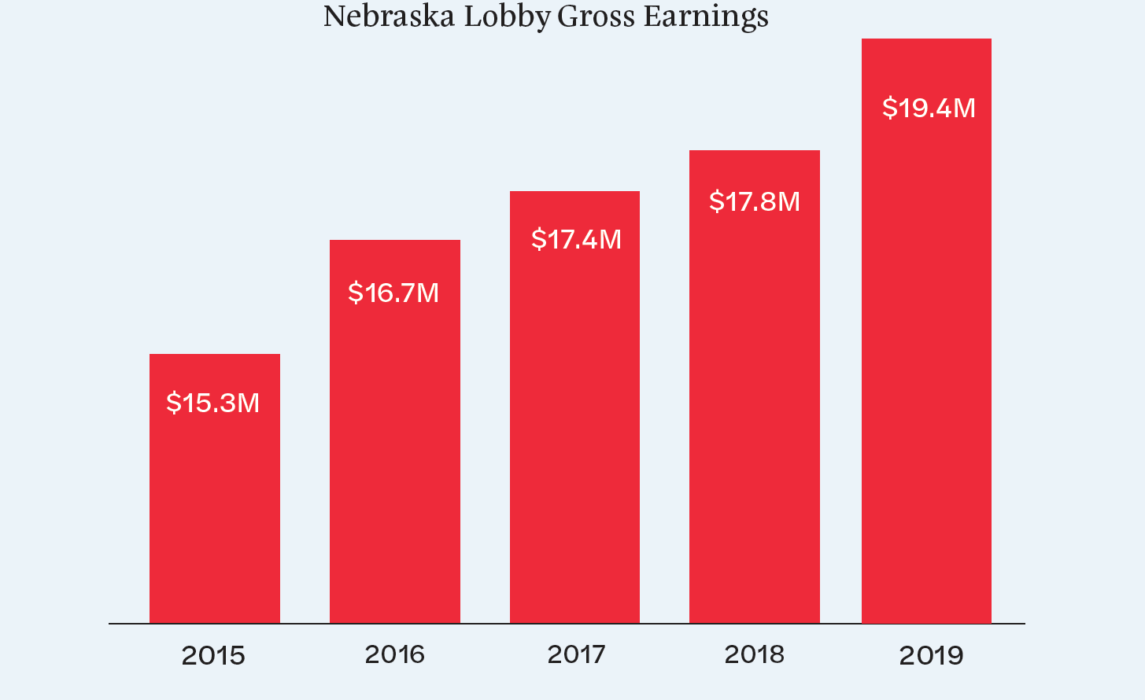