Representative democracy is all about the numbers, but the Trump administration and its allies are determined to leave many of our neighbors out of the equation. The Supreme Court recently heard arguments about including a citizenship question on the 2020 Census. Pending a ruling, the Trump administration has directed the Census Bureau to share aggregated citizenship information with states for redistricting purposes. 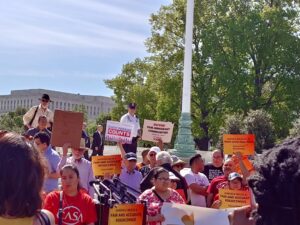 It’s no coincidence that three of the biggest cases before the Supreme Court this term pertain to the 2020 census and partisan gerrymandering — the practice of politicians picking their voters and creating “safe seat” by drawing boundaries rather than actually competing about the future in elections with fair maps and clean elections. Redistricting of all legislative districts happens in 2021 based on the census.

Most Americans understand the power of the census to influence Congressional apportionment, though they may wonder why the federal government shouldn’t also seek to know how many noncitizens live within its borders. An equally important question is why the Trump administration insists on using the census to collect this information while forgoing more accurate methods that won’t distort Congressional apportionment or federal funding.

The Census Bureau does far more than conduct a national headcount every ten years; the American Community Survey (ACS) is the Census Bureau’s more frequent and detailed counterpart to the decennial survey. Whereas the Bureau last conducted a longform census in 2000, since 2005 it has conducted the ACS in monthly increments by mail, email, over the phone, and in person, targeting about 3.5 million households in total each year. Supplementing the short form census now in use, the ACS offers a more granular view of America’s composition, including citizenship status, languages spoken, and even what kind of toilet a family uses. Sharing this information with other federal agencies, state authorities, and the private sector offers guidance for everything from distribution of federal funds to allocation of law enforcement personnel to where retailers will build stores. In a world where data is currency — the more detailed and current, the better — it is hard to understate the value of the ACS.

Conservative lawmakers have frequently attacked the ACS as being invasive and wasteful to justify underfunding and weakening the program. Rep. Daniel Webster (R-FL) has stated, “This is a program that intrudes on people’s lives, just like the Environmental Protection Agency or the bank regulators,” going so far as to call it “the very picture of what’s wrong with DC.” Republicans unsuccessfully attempted to end the program in 2012, but Congressional Republicans have since managed to slash the budget for the ACS and make compliance voluntary, which both increases the costs and reduces the accuracy of the survey. In contrast, willfully failing to respond to the decennial census constitutes a crime, though no one has paid a legal penalty for doing so since 1970.

These same legislators, without a thought about hypocrisy, support the Trump plan to ask the citizenship question and provide that detailed information to states. Whereas ACS data is anonymized, census data is personally identifiable and new Census Bureau rules will allow state redistricting authorities to access this information at the block level. If Congressional Republicans and the Trump Administration are concerned with protecting privacy, why would they want to include this question and offer to share the data with states? Similarly, the cost of nonresponse followups (NRFU) is expected to rise due to likely noncompliance from immigrant households frightened of legal reprisals. If conservative lawmakers care about the burden to taxpayers, why do they undervalue the economic benefits of expanding funding to the ACS while allowing the Trump administration to make the census more difficult and more expensive to administer?

The unfortunate answer is that this rules change adds to a portfolio of policies designed to intimidate immigrants and diminish their political representation, a cause which both the president and Congressional Republicans support. As with ACS data, the Census Bureau legally cannot share census information, including citizenship information, with law enforcement (though President Trump has proposed doing so in the past). This has not calmed the fears of the communities Trump is targeting, however, and the mere presence of the question threatens to reduce participation. Even U.S. citizens may refuse to respond for fear that authorities may abuse information about undocumented relatives or cohabitants. The Bureau’s own research suggests the question’s inclusion could result in hundreds of thousands, if not millions fewer respondents. This compounds already low participation rates among communities of color and low-income households, who are more likely to rent and tend to move more frequently, making follow-up visits difficult for census enumerators. Knowingly undermining the accuracy of the census instead of collecting this information via the ACS only makes sense as a partisan power play.

Republicans have failed to promote policies that appeal to broad cross-sections of the changing face of America and seem more interested in making apartheid great again. Wealthy special interests have rewritten the rules that maintained a balance of money in politics for 40 years after Watergate, removed protections of the Voting Rights Act, gerrymandered districts, and now deliberately taken steps they believe will intimidate certain populations from participating in Census 2020, resulting in an undercount.

America is changing quickly, and  the addition of a citizenship question question to the 2020 form is an attempt by the administration to resist that change. Deliberately undercounting immigrant and low-income households will result in less representation in Congress and reduce federal dollars to the states to provide services for a growing and changing population. We will either understand that with an accurate count so we can plan appropriately, or risk setting up the unacceptable possibility of a governing minority that is completely disconnected from, and uniformed by, the people they represent.

Regardless of how the Supreme Court rules on the constitutionality of the question, the Trump administration should not squander taxpayer resources administering a count with the intent to exclude those Americans who most need to have their voices heard. The Constitution is clear, Count Everyone!

Felony Disenfranchisement: The Issue That Isn't Going Away