Lamone v Benisek: A Frustration with Gerrymandering Led One Man to the Supreme Court

Steve Shapiro was an engineer, a Democrat in Maryland, and a member of Common Cause. His frustration with his own state party and the way they gerrymandered district lines in 2011 led him to the U.S. Supreme Court.

It looked like two amoebas connected by a narrow tentacle.

And it wasn’t just his district, either. Maryland is one of the most gerrymandered states in the union, its congressional map carved up by Democratic leaders grabbing bits of population here and there and stitching them together into wild shapes in order to make each district’s winner – typically the incumbent — a foregone conclusion. 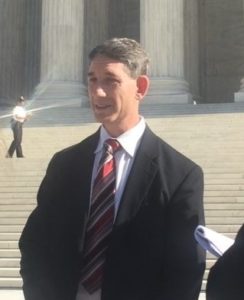 The disrespect for the voters is what upset Shapiro the most. “The people are supposed to get to decide who their representatives in the House are going to be,” he said in a recent interview. “Not the other way around.”

So Shapiro did something really quite amazing. In 2013, despite his lack of any legal training, he wrote and filed a complaint in federal district court on behalf of himself and two other state residents, on the grounds that Maryland’s gerrymandering violated their constitutional rights.

Arguments in that case, which has been narrowed over time and now carries the name of only one of the original plaintiffs — John Benisek, a Republican voter — will be held before the Supreme Court on Tuesday, March 26, 2019.

The Court is considering both Lamone v. Benisek and Rucho v. Common Cause, a case from North Carolina where Republican legislators drew the maps to favor their party. Lower courts have ruled district maps in both those cases to be unconstitutional. The High Court’s decision will have profound implications for the future of gerrymandering reform.

Shapiro’s personal quest to end gerrymandering in Maryland dates back to the early 1990s when the state legislature drew new district lines that separated him from adjacent neighbors and created a tiny corridor connecting his clump of voters to another clump in a distant part of another county. The reasoning was an open secret: “They did that so Mr. Hoyer could take what was in the middle,” Shapiro said, referring to Steny Hoyer, the 20-term congressman who is currently House Majority leader, the second-most powerful Democrat in the country.

“In the past, it’s been that kind of inside baseball – like protecting the incumbent,” Shapiro said.

Next Level Activism: “What Have I Got to Lose?”

Shapiro, now 58, is an engineer by training, having served for many years in the Coast Guard and other government agencies.  He’s a longtime member of Common Cause. And over the years, he wrote the occasional letter about gerrymandering, made the occasional phone call.

But the 2011 redistricting really set him in motion. There was still some of the old-style gerrymandering at work – Rep. Hoyer kept the voters he wanted, for instance — but this redistricting had an overtly partisan motivation as well: It broke up a reliably Republican district in western Maryland. The goal was to change the makeup of the state delegation from six Democrats and two Republicans to seven and one – not because voters had voted differently, but because the lines were moved.

“I figured: ‘OK I don’t like this,’ ” Shapiro said. “So then I started looking at the Constitution and thinking: ‘Well, that has to be unconstitutional.’ I thought I saw just on my own uneducated reading that there were some points in the Constitution that I thought would address this. So I figured ‘What have I got to lose? Maybe I’ll write this up.”

There were three parts of the Constitution that seemed particularly relevant to Shapiro.

First, there was Article 1, which establishes that members of the House of Representatives will be “chosen… by the People” – not vice versa. “The Equal Protection Clause sounded good to me, too,” Shapiro said.

But what eventually got Shapiro’s case all the way to the Supreme Court was his claim that gerrymandering also violates the First Amendment by abridging the freedom of speech – in this case, punishing voters who voted Republican by making their votes ineffective.

“It’s a good argument: The fact that the government is not allowed to favor or disfavor citizens based on their political views,” Shapiro said.

It’s also, as Shapiro noted in his filing, an argument that was essentially invited by former Supreme Court Justice Anthony Kennedy in his concurrence in a 2004 case, Vieth v. Jubelirer. In that case, the Court delivered a fractured opinion, dismissing a Pennsylvania gerrymandering lawsuit that had been brought primarily under the Equal Protection Clause. But Kennedy made a suggestion.

“The First Amendment may be the more relevant constitutional provision in future cases that allege unconstitutional partisan gerrymandering,” he wrote.

“If a court were to find that a State did impose burdens and restrictions on groups or persons by reason of their views, there would likely be a First Amendment violation, unless the State shows some compelling interest.”

Shapiro’s case, as it happens, has already made it to the Supreme Court twice and won a unanimous verdict the first time – on a technicality. The original lawsuit was thrown out by a federal judge in 2014. That decision was upheld by the U.S. Court of Appeals for the 4th Circuit. But federal law as interpreted by the Supreme Court has long required that any non-frivolous challenge to the constitutionality of the apportionment of congressional districts be heard by three judges, serving on a panel, not just one.

An actual lawyer had stepped in to be lead attorney in the case by that point: Michael Kimberly, then an associate and now a partner in the Supreme Court practice of the Washington, D.C., law firm Mayer Brown.

Kimberly and Shapiro appealed the 4th Circuit decision — and the Supreme Court ruled unanimously in their favor in 2015, stating that the three-judge requirement “could not be clearer.”

Kimberly then narrowed the case to center around the First Amendment argument and the single most brazen change in the map: The destruction of the 6th District in rural western Maryland as a Republican stronghold. The 2011 redistricting swapped out over 360,000 residents for a similar number of voters from the liberal Washington, D.C., suburb of Montgomery County, flipping the district from red to blue.

Shapiro, a registered Democrat who now lives in solid-blue Bethesda, dropped out of the case as a named litigant in late 2016.

When the renamed case was heard by a three-judge panel in November 2018, the panel threw out Maryland’s congressional map, sending the case back to the Supreme Court, this time for a ruling on its merits.

Common Cause, which had previously supported Shapiro as an amicus curiae, wrote in a 2018 brief to the Supreme Court on the Lenisek case that “The dismemberment of Maryland’s Sixth Congressional District is a textbook partisan gerrymander by this Court’s own definition.”

And quoting the opinion from a 1968 Supreme Court case, the Common Cause brief notes that the right to join a political party “for the advancement of political beliefs, and the right of qualified voters, regardless of their political persuasion, to cast their votes effectively . . . rank among our most precious freedoms . . . protected by the First Amendment.”

As for Shapiro, after 30-plus years working as an engineer, filing his case inspired him to enroll in law school. He graduated from the George Washington University Law School last May.

“I figured I had so much fun doing this myself pro se — doing the research and writing this up – that maybe I could learn to do this for real,” Shapiro said.

And he’s still following his case – along with the companion North Carolina case – very closely. “I still feel a sense of ownership there,” he said.

Last year, he worked with Dean Alan Morrison of the George Washington University Law School, who filed an amicus brief on Shapiro’s behalf in what used to be his case. Among other arguments, he reprised his original concern about Article 1 of the Constitution. Its language, he wrote, “requires that members of the House be chosen by ‘the People’ but the legislature of the State of Maryland, by its gerrymandering being challenged in this case, has drawn the district lines so that it, not the People, effectively decide who will be their Representatives in Congress.”

And Shapiro also worked with Michael Geroe, a long-time friend and member of the Supreme Court Bar, to file an amicus brief in Rucho v. Common Cause, as well. In that brief, he notes that the Maryland General Assembly actually passed a bill in 2017 that would have turned redistricting over to a nonpartisan commission, effectively ending the state’s long tradition of gerrymandering – but only if five other states, including North Carolina, joined in a compact to do the same. The bill was considered a bit of a stunt and was vetoed by the governor.

But, Shapiro wrote, “North Carolina and Maryland already have such a compact — the United States Constitution.”

Partisan Redistricting Before Elbridge Gerry: Why the History of Gerrymandering Matters Today