On April 23, the Supreme Court heard oral arguments in Commerce v. New York, the case over whether the Trump administration will be allowed to include a question about citizenship on the 2020 Census.

On April 23, the Supreme Court heard oral arguments in Commerce v. New York, the case over whether the Trump administration will be allowed to include a question about citizenship on the 2020 Census.  These arguments come after three federal district judges in New York, California, and Maryland found that including the citizenship question would violate the U.S. Constitution and the Administrative Procedure Act.

They also ruled to stop the addition of the question in its tracks. 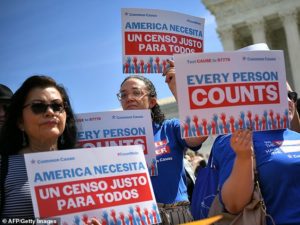 But the Trump Administration is still pushing for the dangerous question to be added — and now their arguments (and lies) have been heard by the highest Court.

Common Cause is fighting alongside activists across the United States and from all sides of the political spectrum against this dangerous question and ensure a fair count in the 2020 census.  We joined former and current elected and appointed Republican officials from four states in submitting a friend-of-the-court brief arguing that the inclusion of the citizenship question undermines the clear historical purpose of the census and the intent of the founders to count every individual residing in the United States once every decade.

A fair and accurate census is essential to our democracy. Our elected leaders should be committed to ensuring that every individual who lives in the United States gets counted – kids and adults, citizens and noncitizens, and folks who live in cities or in rural areas.  We need an accurate census to ensure that every person gets represented fairly and that every community has access to federal funds for roads, bridges, public education and public safety.

The Case
The Trump administration added the citizenship question with complete disregard for the very real risk of a differential undercount. A differential undercount occurs when some groups of people are undercounted at a higher rate than other groups of people.  All three district courts found that the addition of the citizenship question would cause a differential undercount of certain populations, which would cause those communities to lose representation in Congress and federal funding for public infrastructure, public education, and public safety.  This would disproportionately affect areas with high populations of Latinx people and immigrants. Combined with the other racist policies and rhetoric we have seen from the Trump administration, it is clear that this is an attack on immigrant and minority communities in the United States.

Takeaways from Oral Arguments
There are several signs that the Supreme Court may decide along ideological lines to permit the inclusion of the citizenship question on the 2020 Census. The one thing the justices all seemed to agree on was that the purpose of the census was enumeration. This is key because the citizenship question threatens a full count, which undermines the purpose of the census. However, there was disagreement about how much deference should be given to the executive branch for decision-making that undermines the accuracy of the census.  But no matter the outcome, Common Cause will continue to fight to ensure that there is an accurate count of all communities.

What’s Next
The addition of a citizenship question to the 2020 Census form is the Trump administration’s way to rig the data that is needed for congressional apportionment and redistricting. Through a citizenship question, data that our representative democracy relies on will be skewed long before politicians have the opportunity to manipulate districts for political gain.

We hope that the Supreme Court keeps the citizenship question off the 2020 Census, but regardless of the outcome, the fight lies with each of us to put pressure on Congress to amend the Census Act and ensure that any question that gets added to the Census is must go through a extensive review process.

The 2020 Census cannot become a political tool — and we can’t let it be abused to strip vulnerable communities of their power and their resources. Tell Congress to act now.

Democracy In The States: April 2019