In the July 2, 2019 edition of the Gerrymander Gazette, we discussed the next phase of the fight to end gerrymandering. This month, we will take a closer look at one of the fronts in that fight: state court lawsuits.

On June 27, 2019, the U.S. Supreme Court dealt a blow to democracy in its ruling in Rucho v. Common Cause and Lamone v. Benisek. The Court stated in a 5-4 opinion that partisan gerrymandering is a nonjusticiable political question that federal courts will not police. Despite this setback, Chief Justice Roberts identified approaches that can serve as an alternative to federal court intervention. He cited state reforms like independent citizen redistricting commissions and others that can be passed by ballot initiative. In addition, the majority states that “(p)rovisions in state statutes and state constitutions can provide standards and guidance for state courts to apply.” Challenging maps as partisan gerrymanders under state law in state court is a tactic that already succeeded in Pennsylvania and that is currently being deployed in North Carolina in the first post-Rucho/Lamone case to challenge a partisan gerrymander. State constitutional provisions that are not found in the U.S. Constitution and the ability of state courts to have the final say in interpreting state constitutions provide voting rights advocates with the next frontier in the fight for fair representation.

State constitutions may also contain provisions related to elections that do not have analogous counterparts in the U.S. Constitution. State supreme courts may interpret these provisions in ways that provide protections for voters that are stronger than federal law. For example, 28 states have clauses guaranteeing “free” elections and 13 of those 28 guarantee the right to “free and equal elections.” Due to their more specific application to voting rights, these clauses may provide the legal framework advocates need to launch state court litigation challenging voting districts that have been manipulated for partisan purposes. 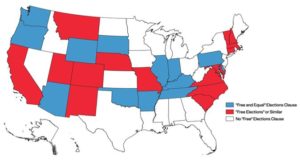 In 2017, the Public Interest Law Center filed a lawsuit on behalf of individual voters and the League of Women Voters of Pennsylvania in Pennsylvania Commonwealth Court to challenge Pennsylvania’s congressional districts. In the redistricting cycle following the 2010 census, Pennsylvania was widely identified as one of the worst gerrymanders in the country. Despite a typically even vote split between Democrats and Republicans in every election since the post-census approval of new districts in 2011, Republicans won 13 of 18 seats each time. The plaintiffs argued that the districts constituted a partisan gerrymander that violated several provisions of the Pennsylvania Constitution, including the “free and equal elections” clause. Common Cause filed an amicus brief in the case detailing the long history of the clause in Pennsylvania.

The Pennsylvania Supreme Court struck down the congressional map, stating that the court’s own precedent had “established that any legislative scheme which has the effect of impermissibly diluting the potency of an individual’s vote for candidates for elective office relative to that of other voters will violate the guarantee of ‘free and equal’ elections afforded by Article I, Section 5.” The court relied solely on the Free and Equal Elections Clause and declined to decide whether the map also violated other provisions of the Pennsylvania Constitution that the plaintiffs raised. The opinion added that the lack of an analogous clause in the U.S. Constitution meant that its precedent interpreting state constitutional provisions in lockstep with the U.S. Supreme Court’s interpretation of analogous federal clauses did not apply.

Success in League of Women Voters of Pennsylvania before the Rucho/Lamone decision turned out to be a harbinger of things to come. It established a new and innovative approach in the fight for fair representation now that the U.S. Supreme Court has shut the door on federal court challenges to partisan gerrymandering. Common Cause is currently awaiting a trial court decision in Common Cause v. Lewis, the first case to test this approach post-Rucho/Lamone.

Common Cause v. Lewis and Another North Carolina Gerrymander

In 2011, as part of a national movement by the Republican Party to entrench itself in power through redistricting, North Carolina Republicans’ mapmaker manipulated district boundaries with surgical precision to maximize the political advantage of Republican voters and minimize the representational rights of Democratic voters. It worked. In 2012, 2014, and 2016, Republicans won veto-proof super-majorities in both chambers of the General Assembly despite winning only narrow majorities of the overall statewide vote.

In 2017, after federal courts struck down some of the 2011 districts as unconstitutional racial gerrymanders, Republicans redoubled their efforts to gerrymander the district lines on partisan grounds. They instructed the same Republican mapmaker to use partisan data and prior election results in drawing new districts. In both the North Carolina House and North Carolina Senate elections in 2018, Democratic candidates won a majority of the statewide vote, but Republicans still won a substantial majority of seats in each chamber. The maps are impervious to the will of the voters. Because North Carolina is one of the few states in the country where the governor lacks power to veto redistricting legislation, the General Assembly alone will control the next round of redistricting after the 2020 census.

Accordingly, as things currently stand, the Republican majorities in the General Assembly elected under the existing maps will have free reign to redraw both state legislative and congressional district lines for the next decade. This perpetuates a vicious cycle in which representatives elected under one gerrymander enact new gerrymanders both to maintain their control of the state legislature and to rig congressional elections for ten more years. Only the intervention of the judiciary can break this cycle and protect the constitutional rights of millions of North Carolinians.

The plaintiffs are asking the court to rule that the North Carolina Constitution prohibits partisan gerrymandering, to throw out the gerrymandered 2017 plans and to appoint a referee (also known as a special master) to create new, constitutional legislative districts for the 2020 primary and general elections. The new districts must be drawn without any partisan political consideration. Regardless of the outcome at trial, an appeal that ends with a decision from the North Carolina Supreme Court is likely. Our hope is that the North Carolina Supreme Court will interpret both the state’s Free Elections Clause and its provisions that are analogous to federal law in ways that prohibit partisan manipulation of voter districts. Common Cause v. Lewis represents an important test case to determine whether state courts will become a much needed venue for protecting voters’ fundamental democratic rights.

For 2020 candidates, what about democracy?