It was either going to be a champagne day or a tequila day at Common Cause when the Supreme Court announced its decision in Rucho v. Common Cause and Lamone v. Benisek. As most of you probably know by now, the champagne is still on ice because the U.S. Supreme Court ruled last week that federal courts can do nothing to stop partisan gerrymandering. In a 5-4 joint opinion in both cases authored by Chief Justice John Roberts, the Court ruled that partisan gerrymandering is a political question that federal courts cannot police.

Read bipartisan condemnation of the decision. 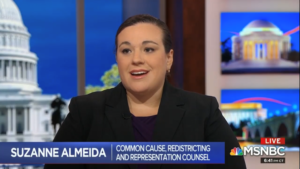 Prior to this decision, federal trial courts in Maryland, Michigan, North Carolina, Ohio, and Wisconsin interpreting federal law and state courts in Pennsylvania and Florida interpreting state law were able to discern standards to identify illegal partisanship in redistricting. Unfortunately, the five-Justice U.S. Supreme Court majority said that they could not do the same for federal courts.

Rucho and Lamone will be remanded to the trial courts with instructions that the plaintiffs’ cases be dismissed. Dismissal will also be the fate of challenges to partisan gerrymanders that initially succeeded at trial in other states as well. The maps in these states will be used one more time in 2020 before the next redistricting cycle following the census. This decision also means that federal court challenges to maps as unconstitutional partisan gerrymanders will no longer be possible for the foreseeable future.

Bummer, right? But that’s not the end of the story (or this Gazette.) Challenging partisan gerrymanders in federal court is only one avenue for reform. Here is why the fight will continue.

Federalism Has Its Perks

State supreme courts generally have the final word in cases involving interpretations of state constitutions and statutes. As a result, the U.S. Supreme Court’s decision has no impact on the ability of citizens to challenge maps as illegal partisan gerrymanders under state law in state court. Common Cause is currently a plaintiff in one such case, Common Cause v. Lewis, a challenge to North Carolina’s state legislative districts. This case will go to trial in state court on July 15. Our case generated the release of files from the late Republican gerrymandering guru Thomas Hofeller, which likely led the Supreme Court to suspend the Trump Administration’s effort to place a harmful citizenship question on the 2020 census.

In January of 2018, the Pennsylvania Supreme Court struck down the commonwealth’s gerrymandered congressional map as a violation of the Pennsylvania Constitution’s “free and equal elections” clause. The U.S. Constitution does not contain such a provision. When the defendant legislators from Pennsylvania sought review of the decision by the U.S. Supreme Court, the Justices declined to intervene. Pennsylvania isn’t the only state with this added protection for voters. As the Pennsylvania Supreme Court described in a footnote, 13 states have an identical “free and equal” elections provision. In addition to Pennsylvania, these states include Arizona, Arkansas, Delaware, Illinois, Indiana, Kentucky, Oklahoma, Oregon, South Dakota, Tennessee, Washington; and Wyoming. Another 13 states have some similarly-worded version of the provision. See research from the Campaign Legal Center, Professor Joshua Douglas, and the Princeton Gerrymandering Project for more information on this topic.

Ballot Initiatives and Legislation in the States

In 19 states, citizens can go over the heads of legislators by collecting signatures and putting reform directly on the ballot. Seven of those states have already created independent citizen redistricting commissions, leaving 12 where reform could still be implemented in this manner. See our map of these dozen potential target states and a list of the 17 states that have already implemented some checks and balances in redistricting.

In 2018, voters in five states took on gerrymandering at the ballot and won. The new reforms voters implemented either by gathering signatures or through citizen-powered campaigns that pressured legislators to act included:

Politico: “The nationwide battle over gerrymandering is far from over”

The redistricting reform movement also continues to raise public awareness and shame legislators into doing the right thing in states with no ballot initiative option. With polling showing overwhelming levels of support for redistricting reform, change is gaining traction. The New Hampshire General Assembly passed legislation to create an advisory citizens redistricting commission. That bill is now on Gov. Sununu’s desk. There are active coalitions in states from one corner of the country to another. Check out our state redistricting campaigns page to learn more about what is happening in your community.

In its Rucho/Lamone decision, the Supreme Court mentioned the role of Congress in fixing the problem of partisan gerrymandering. Earlier this year, the U.S. House of Representatives passed H.R. 1, a bill with an array of voting rights reforms. One of these reforms requires every state with more than one congressional district to draw districts using an independent citizens redistricting commission. This commission is balanced in partisanship, screened for conflicts of interest, and required to adhere to strictly nonpartisan criteria. HR 1 appears to mark the first time in American history that even one house of Congress has passed sweeping redistricting reform that puts the people first.

To make a long story short, the fight for fair representation continues. May your 4th of July BBQ be plentiful and then let’s get right back to it.

When I think of the Fourth of July...