Glenwood Management is now a household name for its role as “Developer-1” in both of the recent corruption indictments to roil Albany. But, why would a New York City real estate development company, with properties concentrated mostly on the island of Manhattan, be interested in financially contributing to an upstate senator?

On February 18th, Senator Michael Ranzenhofer made headlines in Buffalo, NY by promising to block a major campaign finance reform bill. The bill in question would close what’s known as the “LLC Loophole” – which essentially permits special interests to donate unlimited amounts of money to political campaigns in NY.

One would believe Ranzenhofer to be serious in his threat to block the bill. After all, that’s exactly what he did in 2015! As Chair of the Senate Corporations Committee, he prevented the bill from reaching the floor for a vote, even though the same bill had passed overwhelmingly in the State Assembly.

In response to this bold announcement by Ranzenhofer, we decided to take a close look at Senator Ranzenhofer’s potentially personal stake in keeping the LLC loophole open. What we found is published (below) as an installment in our “Muckraking Monday” series, which was released on Monday, February 22nd.

Of course, reading this report might make you want to take action. We’ll just get that out of the way first:

Glenwood Management is now a household name for its role as “Developer-1” in both of the recent corruption indictments to roil Albany. But, why would a New York City real estate development company, with properties concentrated mostly on the island of Manhattan, be interested in financially contributing to an upstate senator?

Senator Michael Ranzenhofer represents part of Erie and Monroe County and all of Genesee County in the upstate 61st State Senate District. He is also the Chair of the Senate Committee on Corporations, Authorities and Commissions.

Through a “Muckracking Monday” analysis, Common Cause/NY found that even though Ranzenhofer’s district office is a six-hour drive from New York City, Glenwood funneled $94,500 to Ranzenhofer’s senate campaign account through eleven different limited liability corporations (LLCs) over a five year timespan. Leonard Litwin himself, Glenwood’s owner, personally kicked in $6,500 through a direct contribution. 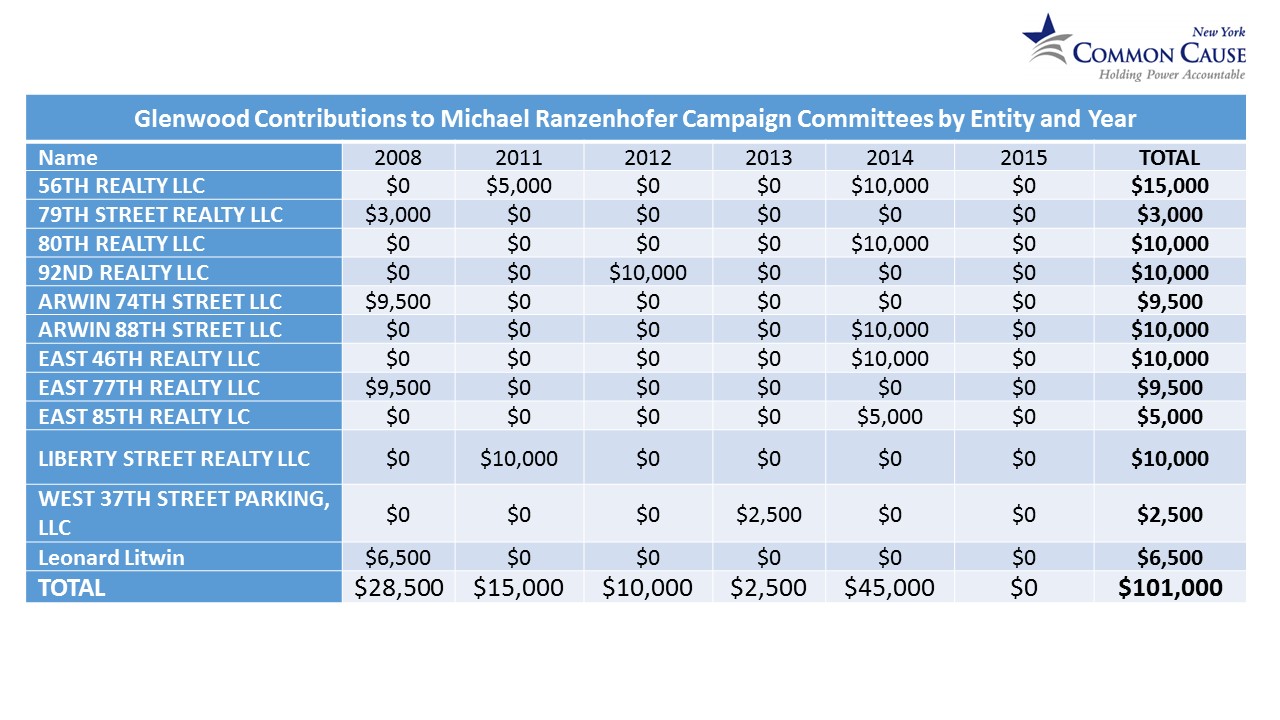 The legal limit that a corporation may contribute, in aggregate, to a New York State campaign committee per year is $5,000. In 2014, Glenwood went 800% above that limit through five different contributions to Ranzenhofer’s campaign committee. This magic trick is made legally possible by the fact that the New York State Board of Elections treats LLCs as individuals with a $150,000 contribution limit per year. As you will see below, Glenwood is not the only corporate entity to make LLC pass-through contributions to Ranzenhofer’s campaign account, but it is certainly the most prolific.

During the spring 2015 session, a bill to close the LLC “loophole” by clarifying that LLCs are regarded as corporations passed the Assembly with bipartisan support. The Senate counterpart, S.60, passed the election committee in April and then was referred to the Corporations Committee – chaired by Senator Ranzenhofer – where it languished without a hearing, even though one was requested by the bill’s sponsor. 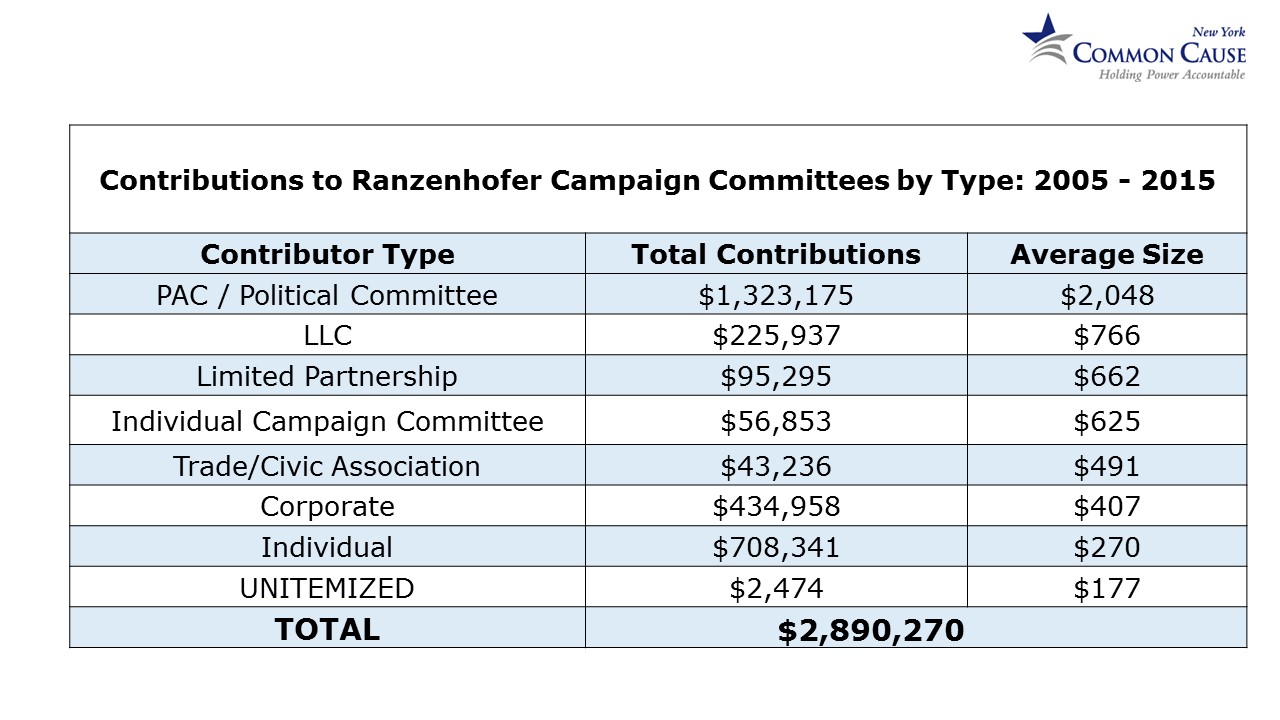 This higher average can be correlated to the predilection of the real estate industry to use LLCs as hidden cash pass-throughs. Every contributions made by an LLC of $2,500 or more was made by an entity who is firmly embedded in the real estate industry. This is easy enough to do as each building often has an associated LLC in which to handle rent, maintenance, etc. By using an anonymous LLC that can only be traced through careful sleuthing, a real estate entity can massively multiply its ability to give – and potentially influence – our New York state legislators.

Glenwood Management even makes it on the list of the top three Ranzenhofer contributors, closely followed by political action committee contributions by the Rent Stabilization Association, an organization in which Leonard Litwin is the Vice Chairman.

Who gives through LLCs?

It is clear that the LLC loophole has been very good to Senator Ranzenhofer, and not just through Glenwood Management. After Glenwood, the Benderson Development Corporation has contributed the most amount of funds through various LLCs. From 2008 through 2015, Benderson gave $15,127 to Ranzenhofer campaign committees – more than any other individual campaign committee has received outside of the $38,000 towards Carl Paladino’s failed 2010 run for governor.

Self-described as “one of America’s largest privately held real estate companies,” Benderson is probably best known in Buffalo as one of the main developers for The Erie Canal Harbor Development Corporation’s (ECHDC) multi-million dollar re-construction of Buffalo’s waterfront.  But, the company has also received millions of dollars in sales and property tax breaks throughout New York State through its many projects.

A Crazy Quilt of Contribution Types

Companies don’t give exclusively through LLCs – which leaves a confusing trail of different addresses and titles to try to piece together for one contributor. For example, Carl Palidino’s Ellicott Development real estate company has cumulatively contributed about $21,000 to Ranzehofer’s campaign account through LLC, individual, and corporate contributions (see table below).  This table is a snapshot of contributions made to Ranzenhofer’s campaign committees and does not represent the full story. For more information, check out the associated spreadsheet of data. 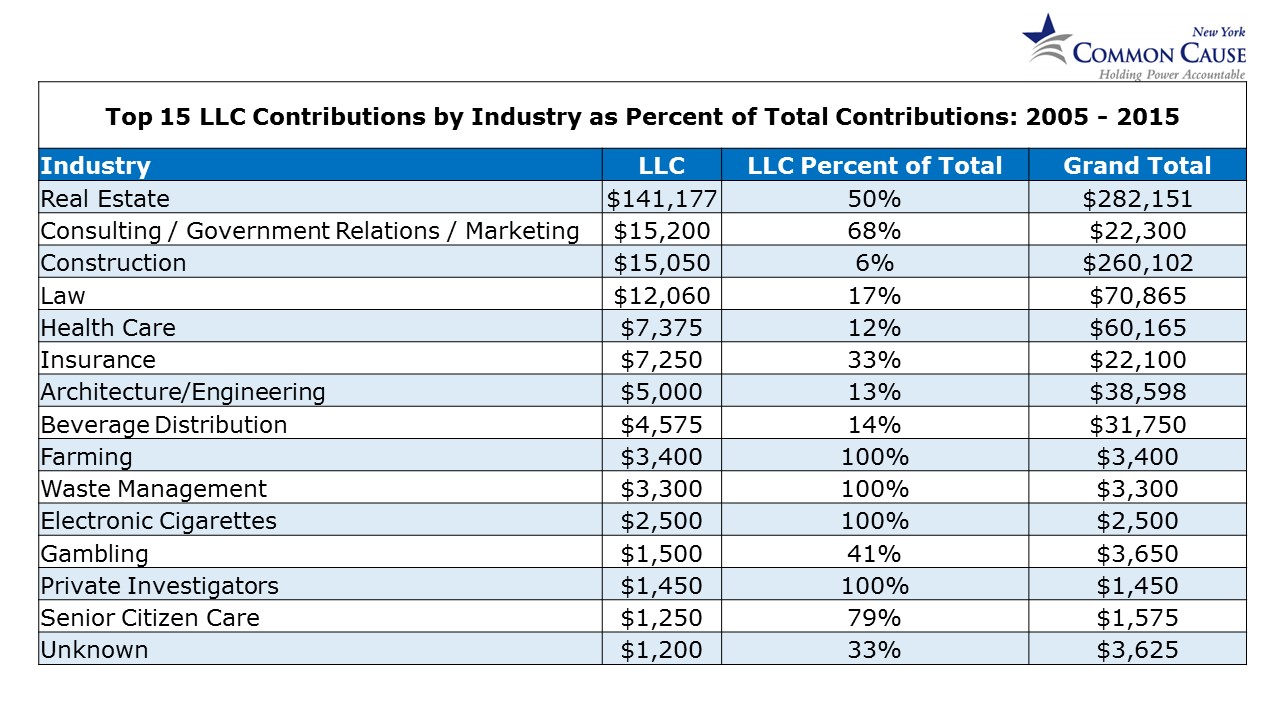 All data was derived from the New York State Board of Election campaign disclosures. Corporate entities and their associated industries were then derived by matching addresses and other identifying information with their public facing websites, news articles, or press releases.