A poll of registered voters statewide taken by Research and Polling for Common Cause New Mexico December 28, 2015- Jan 6, 2016 shows voters are overwhelmingly supportive of ethics and campaign reform measures, some of which are subjects of the 2016 legislative session – the last legislative session before this year’s election.

Approximately 450 randomly selected voters – both Republicans and Democrats – responded to telephone survey, which has a 4.6% margin of error.

“The results of our polling show that the already huge level of public support for reform continues to grow, and that’s not surprising, given recent scandals,” said Viki Harrison, executive director of Common Cause New Mexico. “The question is – are elected officials going to ignore this clarion call?

There are only two paths forward – more scandals, more plea bargains, more bad report cards and further erosion of public confidence – OR – the passage of real reform that sheds light on campaigns, and prevents corruption in the first place.”

Unfortunately, one of the most disappointing results from the poll appeared when voters were asked this question: “In general do you feel that things in New Mexico are headed in the right direction or do you feel things are off on the wrong track?”

The results, tracked over the last three years are as follows: 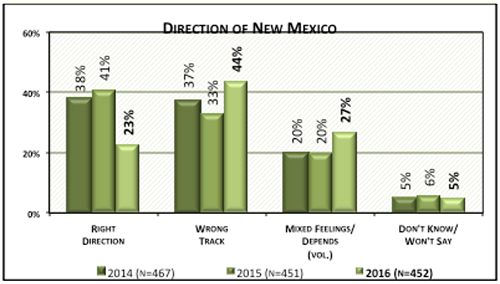 “When we see nearly a 20% drop in those voters who feel we are headed in the right direction, we need to notice and take action, with the myriad of reform bills that have been debated for years” Harrison continued.

Among the poll’s top results are strong support for an independent ethics commission, campaign limits and disclosure:

Overall, 58% of voters believe that limiting campaign contributions to candidates helps to prevent corruption in politics.

The full polling results are available in this report.

See More: Disclosure & TransparencyLegislative EthicsLimits on the Influence of Money In Politics

Lawmakers Should Act on Ethics and Campaign Reforms