Congressman Davis should change his tune on campaign finance reform

Landmark democracy reform has passed the House, but not with Congressman Davis's help. 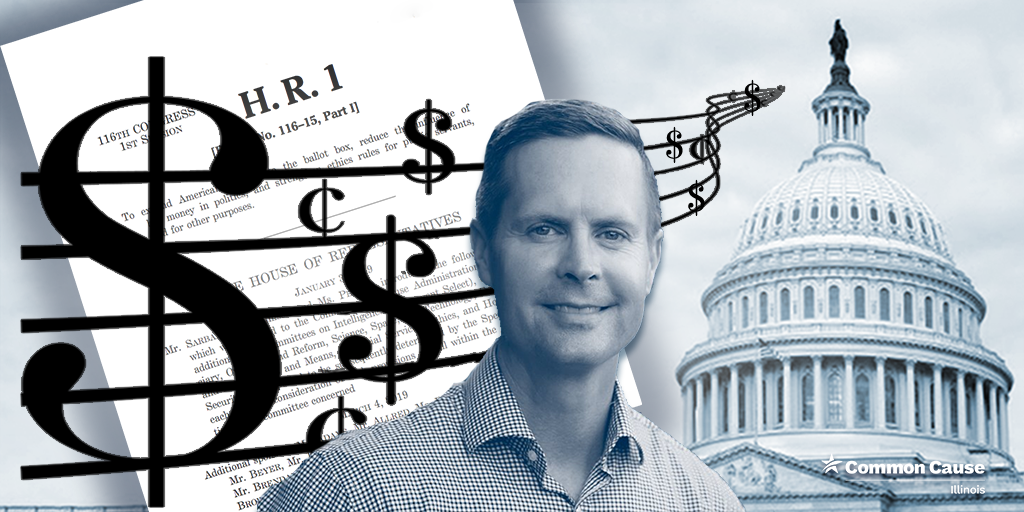 Yesterday, Congressman Rodney Davis (IL-13) took to the floor of the House to sing the praises of Canadian rock band Nickelback and, on the same day, took to the pages of The Hill to belt out his opposition to H.R. 1, the For The People Act.

Both are wildly unpopular positions.

That the congressman has an affection for a band whose mere name prompts a reflexive grimace from so many is forgivable (to each their own). That he opposes reforms the majority of Americans deem necessary to save our democracy is not.

H.R. 1 is a big bill — 571 pages long, to be exact — outlining common-sense solutions to the biggest problems in our democracy, including curbing the undue influence of big money in our politics. Among other things, the bill ends extreme partisan gerrymandering that lets politicians pick their own constituents, revolutionizes how campaigns are financed by empowering small dollar donors through a donor match program, and protects the rights of eligible voters, especially those targeted by systemic voter suppression and discrimination. The bill passed the House today 233-193. Davis voted against the bill.

Davis, who some on the right view as a rockstar rising through the ranks of the GOP, had recently embarked on an anti-H.R. 1 campaign, seeking to burn it to the ground before it can gain even more traction in Congress. From tweets to speeches and now an op-ed, it’s gotta be somebody who takes up the interests of the broken status quo, and that somebody is apparently Rodney Davis.

Davis objects to the use of taxpayer dollars to “line the pockets of politicians,” suggesting that a small donor match program “will publicly fund campaign travel, campaign dinners, and in some cases, the politicians themselves.” That’s the point. Who would you rather have help offset the cost of campaign expenses — we the people or lobbyists and billionaires who expect favors in return? Davis also neglects to mention that H.R. 1’s Freedom From Influence Fund that will fund the program will be sourced “from a 2.75 percent fee assessed on civil and criminal financial penalties with the government.” And that passing reference to using small donor matching funds to pay candidates themselves? He’s referring to the fact that, since 2002, candidates can pay themselves a limited salary under strict rules — it’s what helps non-millionaires run for office. But, too often, candidates don’t take advantage of that provision precisely because of attacks like those from Davis.

He also rails against the alleged overreach of the federal government into the state conduct of campaigns, calling the bill a federal “takeover” of our elections. The bill prohibits the types of sweeping state voter purges that have imperiled the voting rights of millions across the country, requires states to automatically register eligible voters, provides that states should appoint independent commissions to oversee what has traditionally been a rigged and extremely partisan redistricting process, and establishes a security framework to protect our voting systems from hacking and other interference. That’s not a “takeover” of our elections — it’s taking care of our elections and our voting rights which have been neglected for years as politicians have reaped the benefits of voter suppression and voter caging.

Finally, Davis also cites ACLU’s opposition to a handful of the bill’s provisions while failing to note that the ACLU fully supports almost all of H.R. 1. Meanwhile, the ACLU has stated that “[t]he good news is…all of [the issues it has with the bill] can be fixed through targeted amendments.”

Those are the facts on H.R. 1. Davis strays far away from them.

Rather than work to improve on and strengthen the bill, Davis has spent the last several weeks attacking it. Take a photograph of his campaign finance reports and you’ll see why.

Since his first run for office, Davis has raised over $11 million. His top donors aren’t people like you or me, or even individual millionaires in his own district. Sixty-three percent of his donations since he was first elected have been from PACs.

His top donor industry is leadership PACs. In other words, some of the people most invested in Davis are other politicians. Meanwhile, business PACs have donated over $5 million to his campaigns. Those business PACs total nearly half of what Davis has raised in his entire career in the House.

H.R. 1, with its heavy emphasis on reigning in the influence of such PACs, would upend Davis’s way of doing campaign business. That’s a good thing. For far too long, and especially in aftermath of Citizens United, PACs have drowned out the influence of small dollar donors who represent most Americans.

In his last election, just 5% of Davis’s donors were such donors contributing less than $200. In fact, if Davis had a nickel back for every dollar he raised *over* $200 that cycle, he’d have some $172,000 — which just so happens to be about the same amount taxpayers pay to have the congressman go to DC and sing the praises of Nickelback on the House floor.

Cleaning up our elections is a serious and pressing task. Every day that passes more money is being used to distort the policies that impact our daily lives. We cannot make progress on issues like drug prices, climate change, job growth, and gun safety until we make progress on the one issue that affects them all: money in politics. And the American people know that: a recent Gallup poll found that only 20% of us are satisfied with our campaign finance laws.

A good public servant should look at those numbers and conclude that fixing our broken campaign finance system should be a top priority. That elected official would work to improve on any issues in H.R. 1 and work to strengthen what is already this generation’s most important democracy reform package.

Rodney Davis chose not to fight for reform, but to fight against it. This is how he reminds us of who he really is. His constituents, however, are paying attention and deserve better from the congressman. Hopefully, someday when Davis comes home to the 13th district to hear from them, he’ll be singing a different tune.