What Are They Hiding? 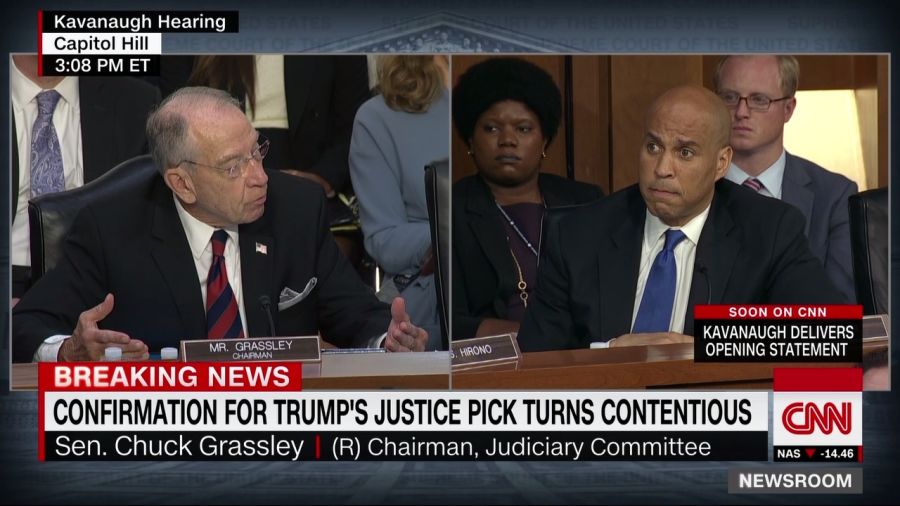 Today is the first day of Senate Judiciary Committee hearings concerning the nomination of Judge Brett Kavanaugh to become an Associate Justice of the United States Supreme Court. Senate Judiciary Committee Chairman Chuck Grassley gaveled the hearings in hours after former President George W. Bush’s personal attorney released to the Committee 42,000 pages of documents from Kavanaugh’s time as an attorney in the Bush White House. Meanwhile, the National Archives told Grassley that it could not fulfill his request for documents until the “end of October.” Of note, Grassley’s original request for documents left out Kavanaugh’s tenure as Staff Secretary – a job he called “most instructive” to his role as a judge.

Last week, Common Cause sent a letter to the Senate urging it to halt all Supreme Court confirmation proceedings until the full record of Judge Kavanaugh is public and until more is known about ongoing Justice Department investigations into the president. As we wrote, “a cloud hangs over the very constitutional officer who is vested with the power to choose a person for a lifetime appointment to the highest court in our judicial system and who may later sit in judgment of them. Once confirmed, the appointment cannot be undone by a majority vote.” The Washington Post’s Jennifer Rubin noted that Common Cause’s letter got “to the nub of the problem.” (Common Cause is hand-delivering hard copies to all 99 Senate offices this morning, as well.)

In sum: how can the Senate fulfill its constitutional responsibility to provide informed “advice and consent” if so much about the nominee’s record – and the ongoing DOJ investigations into electoral interference – isn’t public?

That was a key part of this morning’s hearings so far.

From the opening seconds of the hearing, and beginning with Sen. Kamala Harris, Senate Democrats demanded a halt to the hearing until more documents are made public.

Here are some of the requests:

Senator Harris: “The Committee received just last night, less than 15 hours ago, 42,000 pages of documents that we have not had an opportunity to review or read or analyze. We cannot possibly move forward, Mr. Chairman, with this hearing.”

Senator Blumenthal: “Mr. Chairman, we have been denied real access to the documents we need to advise and consent which turns this hearing into a charade and a mockery of our norms. I, therefore, move to adjourn this hearing.”

Senator Klobuchar: “Last Friday we learned that nearly 102,000 pages of documents from Judge Kavanaugh’s work in the White House Counsel’s Office are being withheld from the committee and the public based on a claim of constitutional privilege. Executive privilege has never been invoked to block the release of presidential records to the Senate during a Supreme Court nomination.”

Senator Booker: “This is an attempt to be fully equipped to do our constitutional duty, which everybody, Republicans, and Democrats, on this committee take seriously. It is very hard to perform our role of advice and consent when we do not have a thorough vetting of the background of the candidate. In areas which he – the candidate himself – has referred to as the most formative part of his legal career, where he himself has talked about how important this period of his life is, we’re denied the full vetting. I remind you that you, yourself [Grassley], asked for a limited set of documents for when he was in the White House Counsel’s office. You, yourself, set that standard. And even on that limited standard, sir, we have not received the documents.

Senator Grassley stated that the documents were “requested before the hearing and we received them before the hearing, just as we requested. The majority [Republican] staff began reviewing the documents as soon as they arrived and has already completed its review. There is thus absolutely no reason to delay the hearing.” Senate Republicans then routinely referenced the volume of documents that have been put on the public record.

Those documents, however, are under-inclusive. As Ranking Member Senator Feinstein said, “93% of the records from Kavanaugh’s tenure in the White House as counsel and staff secretary have not been provided to the Senate, and 96% has not been given to the public.”

The information deficit has been a key part of the discussion at the hearings thus far and is sure to continue throughout the hearings.