Every American deserves to have their voice heard in our elections, from city council to the presidency. Those who are serving in elected office should reflect the beliefs of the people. In a democracy, the people have the power— and voters should have the final say. Yet, the way our voting systems are designed can limit voter’s choices. Ranked-choice voting offers a solution.

Every American deserves to have their voice heard in our elections, from city council to the presidency. Those who are serving in elected office should reflect the beliefs of the people. In a democracy, the people have the power— and voters should have the final say.

Yet, the way our voting systems are designed can limit voter’s choices. Often, voters feel like there is a predetermined winner— typically the most well-connected or well-funded. Or, voters feel like they’re choosing the lesser of two evils in order to prevent a worst-case scenario.

In most American elections where there are more than two candidates, candidates don’t even need the majority of the vote; they just need to achieve a higher percentage than anyone else. As a result, most candidates only prioritize their core group of supporters, and don’t take the time to engage with the whole electorate.

Campaigns can also feel like a race to the bottom, where a zero-sum approach leads to negative campaigning designed to turn people away from the other candidates, rather than draw them in with compelling ideas.

Sometimes, crowded primaries- in which many candidates share similar platforms- can split the vote. Someone who the majority of the voters oppose can win with a low percentage of the vote.

All of these factors can add up to an election that doesn’t truly represent what the people want.

Ranked-choice voting offers a solution. It is a system that accurately represents voters’ preferences. It makes sure that the winner is the candidate with the most support, even if they are not everyone’s top choice.

So how does it work?

We rank things all the time in our everyday lives. Could you list your favorite movies in order of preference? Or the restaurants you would rather go to?

Similarly, ranked-choice voting simply asks you to list your preferences. Except instead of listing places to eat, voters list the candidates that they like best. Voters get to express which candidate they like the most, and also which candidates they would prefer if their favorite does not have enough popular support to win. 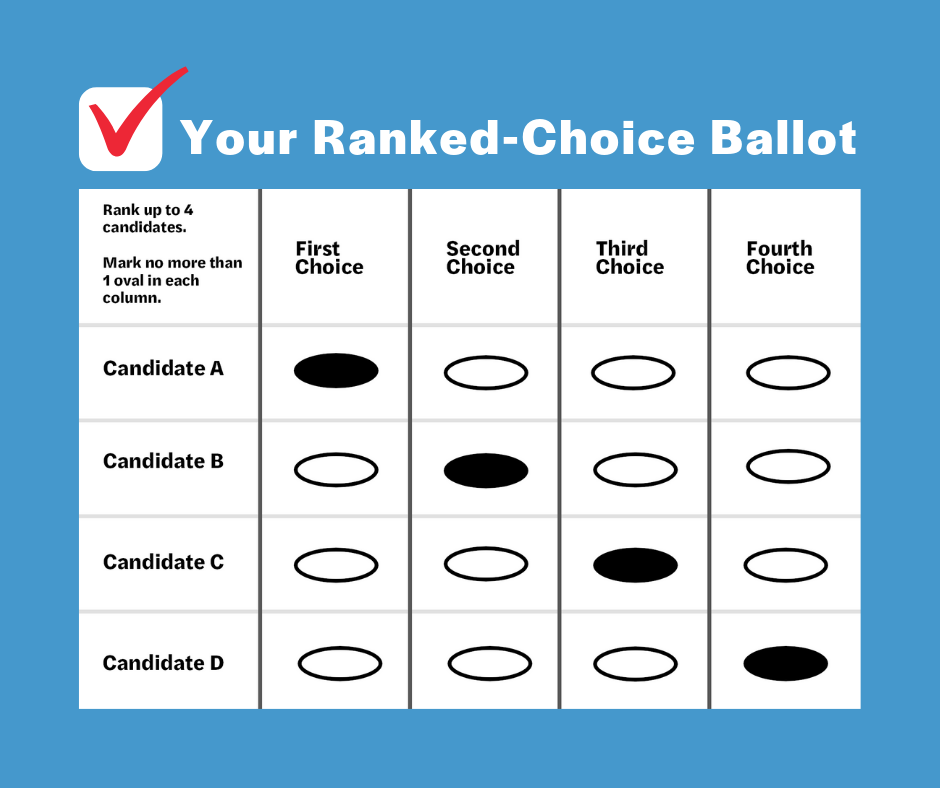 The advantage of ranked-choice voting is that you can specify on the ballot that any of those three candidates would be better for you than Candidate D. Candidate D’s views are the complete opposite of yours and you would prefer anyone else win the election.

Ranked-choice voting is an instant run-off system, meaning that the winner must win the majority of the vote.

First, everyone’s first choice is counted. For you, that would be Candidate A. 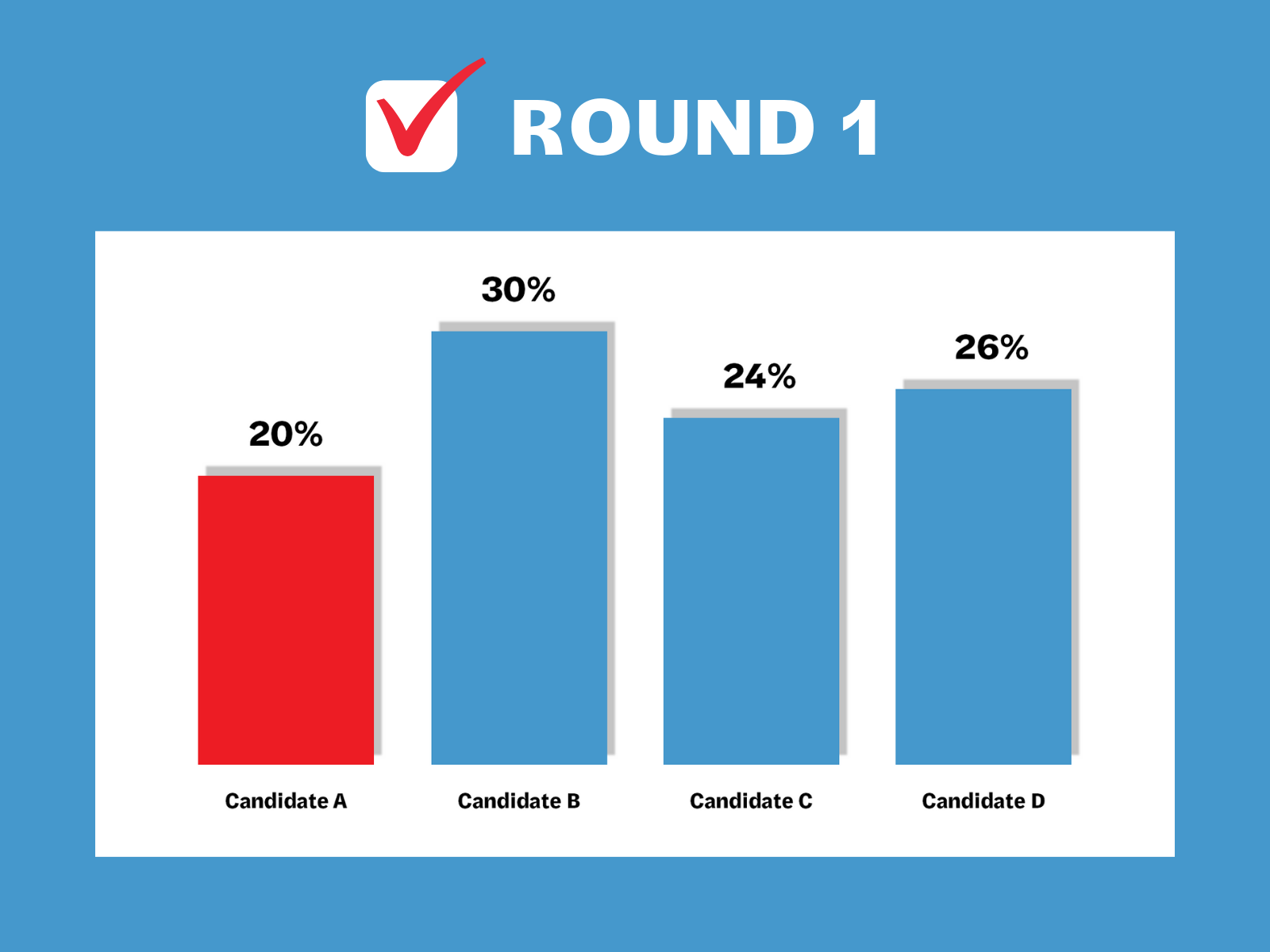 No one got a clear majority- more than 50%- so the election goes into a second round automatically. This is the instant run-off.

Let’s say that in the second round of your race, Candidate D is eliminated. In round three, Candidate B receives 53% of the vote, and Candidate C receives 47%. Candidate B then officially wins the election.

With ranked-choice voting, you don’t have to choose your first choice candidate based on who is mostly like to beat Candidate D. You can vote for Candidate A with the confidence that your back-up choices will be counted too. And ultimately, you are still happy being represented by Candidate B.

Furthermore, candidates with similar platforms need to form coalitions and work together during the campaign. Candidate B could not have won the election if A and C’s supporters did not rank them as their second or third choice.

This need for collaboration means that ranked-choice elections tend to have more positive and constructive campaigning.

At the end of the day, ranked-choice voting makes it easier for people to vote their conscience, and increases the likelihood that the person that most voters agree with is the person that ends up elected to office.

13 cities in the United States now have ranked-choice voting systems, with 7 more in the implementation process.
In 2018, Maine was the first state to elect its U.S. Representatives and one senator using a ranked-choice system. Exit polls showed that “over 60 percent of Maine voters wanted to either keep or expand their use of ranked choice voting.”

Elections should represent voters’ choices fairly and accurately. Ranked-choice voting amplifies the voice of the people.