Every American must remember not to just denounce President Trump's racist attacks, but to also reject it as a political strategy. 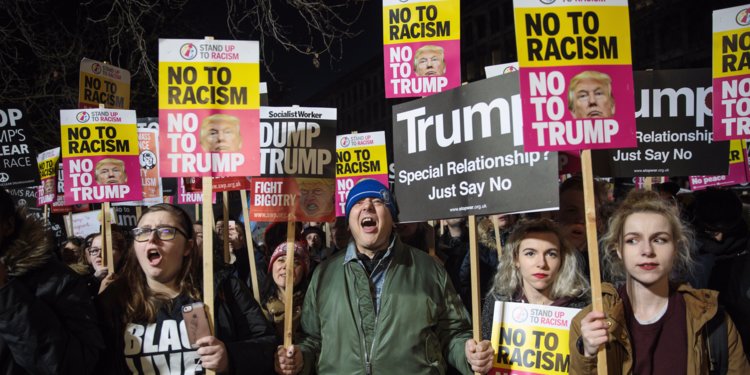 The issue of race came up multiple times in CNN’s recent Democratic presidential primary debates. We heard the most diverse presidential field in the history of the United States respond to President Trump’s racist tweets and agenda. Several candidates simply called Trump a “racist,” while Washington Governor Jay Inslee went so far as to call him a “white nationalist.”

And it’s just not Democrats pointing out Trump’s racism. Congressman Will Hurd of Texas, the only black GOP member of the House of Representatives, recently said that the Trump-led Republican Party was shrinking because too many people in it refuse to follow some simple rules: “Don’t be a racist. Don’t be a misogynist. Don’t be a homophobe.” Former Massachusetts GOP governor Bill Weld, who is challenging Trump in the 2020 Republican presidential primary, recently called President Trump “a raging racist.”

Calling out Trump’s blatant racism and attacks on people of color is important to do for all Americans – especially for those elected as our “leaders.” We need leaders from both political parties to denounce his comments and actions because they are dangerous. They fuel threats from within. Domestic terrorism, as does any form of terrorism, seeks to control though fear.

Trump’s racist comments empower young white men to march in our streets with torches yelling white supremacist chants. They empower his followers to amplify his racist comments on social media and at his rallies. So yes, we all need to denounce them and work to ensure they do not have a place in our society. But that is only one part of what we as Americans, let alone candidates running for president or any public office, must do.

We must also understand, and talk about, how Trump is using racism as a strategy to distract us and divide us against each other. It is no surprise that Trump’s racist attacks against Congressman Elijah Cummings and the city of Baltimore came just days before the House Oversight Committee, which Cummings chairs, released damning information about how a Trump advisor was attempting to profit off of a nuclear deal with Saudi Arabia, or how the White House submitted a draft of Trump’s “America First” energy policy speech to the United Arab Emirates for edits before it was public. In the days after Trump’s anti-Cummings twitterstorm, the media, Trump supporters, and Trump opponents all seemed to be focused on those racist attacks, not the corruption and horrific policy coming from the White House.

Congresswoman Ilhan Omar of Minnesota, who has been the subject of several of President Trump’s racist attacks, recently explained Trump’s strategy to use racism to distract and divide us in an op-ed in The New York Times:

The reasons for weaponizing division are not mysterious. Racial fear prevents Americans from building community with one another — and community is the lifeblood of a functioning democratic society. Throughout our history, racist language has been used to turn American against American in order to benefit the wealthy elite. Every time Mr. Trump attacks refugees is a time that could be spent discussing the president’s unwillingness to raise the federal minimum wage for up to 33 million Americans. Every racist attack on four members of Congress is a moment he doesn’t have to address why his choice for labor secretary has spent his career defending Wall Street banks and Walmart at the expense of workers. When he is launching attacks on the free press, he isn’t talking about why his Environmental Protection Agency just refused to ban a pesticide linked to brain damage in children.

As Congresswoman Omar notes, politicians weaponizing race against the American public is not new. What is new is Trump’s echo chamber: his dedicated base and social media following, 24-hour cable news channels always looking for drama, conservative media outlets with no journalistic integrity, and Russian bots that will uplift anything to divide Americans. We must not forget that exploiting racism was a key part of the Russian interference campaign during the 2016 election, where Russian agents created fake social media accounts to spread racist content. Russia’s goal, as multiple independent researchers have found, was to turn people of color off from voting in the election and to build support among white Americans for Trump’s campaign.

Think about that. Some of the most extreme content, and certainly the increased volume of it, was not created by Americans, but by Russians seeking to divide us. That doesn’t absolve Americans who shared it, or who are harboring such feelings themselves, but it does underscore what President Trump is up to.

Instead of following Russia’s tactical playbook and using tired old tricks of our not too distant past to divide Americans, the President of the United States should provide moral leadership, clearly calling out right from wrong, and leading us toward respect, understanding, and healing.

Trump’s racism and constant attacks on our democratic institutions distract us all from the near-daily scandals plaguing his administration. By all means, they must be denounced, but we can’t lose sight of what he is really doing. As we move closer to the 2020 election, we can expect the Trump campaign to continue to use race as a bait and switch against us all. Every American must remember not to just denounce it, but to also reject it as a political strategy.