Last night’s Republican debate was the fifth presidential debate of the 2016 election season and the fifth debate that left out one of the most important issues voters face: the problem of big money in politics.

SIGN THE PETITION >> Tell debate moderators to ask candidates how they’d get big money out of politics!

Last night’s Republican debate was the fifth presidential debate of the 2016 election season and the fifth debate that left out one of the most important issues voters face: the problem of big money in politics.

About an hour before the Fox Business/Wall Street Journal debate ended last night, the network showed a word cloud of issues viewers on Facebook were talking about and hoped to be brought up in the debate. The biggest issues: homeland security, taxes, the size of government, and campaign finance. Throughout the debate, the moderators asked and candidates promptly responded to questions regarding national and homeland security, the size of the federal government, and each candidates’ tax plan. The one top issue that was not brought up: campaign finance. 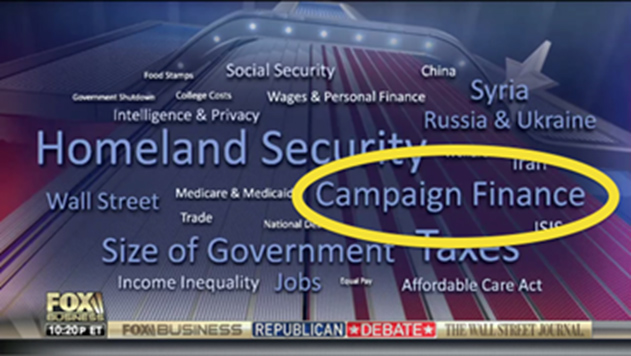 In a way, it’s not all that surprising that a money-in-politics question has not come up in the debates so far. The TV networks who have hosted the presidential debates – Fox News, CNN, MSNBC, CNBC, and Fox Business – are raking in huge sums of money in advertising dollars from political and issue ads. Just this week, Jeb Bush’s Super PAC announced it was buying $6.6 million in ad time on Fox News. The New York Times estimated that TV spending reached $2 billion in the 2014 midterm elections. It will likely be double that for this election season – if not more – with a national presidential election. That means big profits for TV networks and cable companies.

Cable and TV networks’ invested interest in profiting off our broken democracy explains why the National Cable and Telecommunications Association (a lobbying group for Comcast, Charter Communications, Disney, Cox Communications, Viacom, FOX Networks, and Time Warner Cable)  and National Amusements (the parent of CBS & Viacom) both lobbied against the DISCLOSE Act in Congress, a bill that would bring more transparency to political ads. The National Cable and Telecommunications Association has also lobbied against a proposed amendment to the U.S. Constitution to overturn Citizens United.

Just like we need to hold politicians accountable to voters, we need to hold media outlets accountable too. A recent New York Times poll shows that over 80% of the American public want to fundamentally change or completely overhaul the way political campaigns are funded. It’s time both the presidential candidates and news networks hosting future presidential debates – CBS, CNN, ABC, Fox News, NBC, Univision, and PBS – listen to the public.

Candidates and media outlets should be guided by the priorities laid out in the Fight Big Money agenda:

(1)       Everyone participates: provide public funds that will amplify small donations to federal candidates who agree to lower contribution limits.

(4)       Everyone plays by fair, common-sense rules: overturn Citizens United through a constitutional amendment and change the Supreme Court’s approach to money in politics with future appointments.

(5)       Everyone is held accountable, with enforceable penalties to deter bad behavior: reform the FEC so lawbreakers are held accountable and shut down individual candidate Super PACs.

Journalists must ask, debate moderators must ask, citizens must ask – now that we all agree there is a problem, what specifically are you going to do and how soon after you are elected?

Don’t let another opportunity slip away. Tell the next debate’s moderators to get candidates on the record.