With your help, We the People can stand to bring the attention needed to keep fighting special interests, holding elected officials accountable, and building the democracy that all Americans deserve.

By now you have probably heard of “net neutrality.” Net neutrality, which would guarantee everyone equal access to the open internet, is a policy the Federal Communications Commission is currently considering and is supported by 81% of Americans, including a majority of Republicans.

By now you have probably heard of “net neutrality.” Net neutrality, which would guarantee everyone equal access to the open internet, is a policy the Federal Communications Commission is currently considering and is supported by 81% of Americans across the political spectrum. The policy has been endorsed by everyone from comedian John Oliver to President Barack Obama.

To no one’s surprise, the big telecom industry has long opposed true net neutrality protections, and those same corporations spent big money on the recent 2014 elections. A Common Cause analysis of data from the Center for Responsive Politics and the Institute for Money in State Politics shows that Comcast, AT&T, Verizon, Time Warner Cable, and the National Cable & Telecommunications Association spent more than $42.8 million in political contributions during the 2014 election cycle, both on the state and federal level. 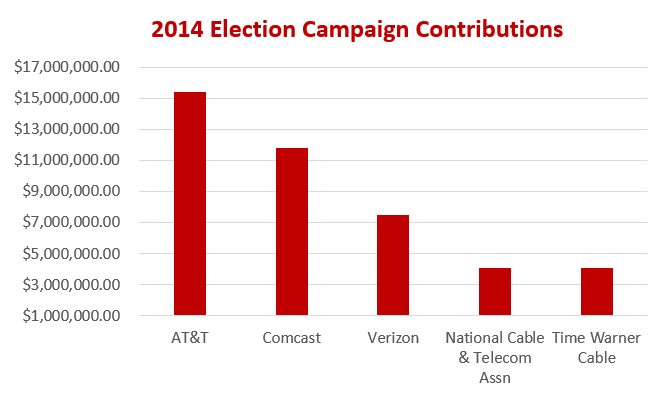 Who Got The Most?

The top recipient of big telecom’s funding on the federal level are party committees. Individual candidates who receive the most include Republican House Speaker John Boehner ($98,175 from Comcast) and Democratic Senator Mark Pryor ($88,650 from Comcast, TWC, and National Cable and Telecom. Assn.). According to an analysis by Gizmodo, members of congressional committees in the House and Senate that oversee internet regulation received over $1.8 million from Comcast, Time Warner Cable, Verizon, AT&T, and the National Cable and Telecommunication Association.