Gerrymander Gazette: The Next Legal Frontier is Here Edition

On July 15, Common Cause’s state court challenge to North Carolina’s General Assembly districts went to trial. In the U.S. Supreme Court’s disappointing Rucho v. Common Cause decision stating that federal courts will not police partisan gerrymandering, the 5-4 majority cited state activity as an alternative approach to combating the practice. Common Cause v. Lewis, which concluded on Friday, could provide a blueprint for the next phase in legal challenges to the manipulation of legislative districts. The 10-day proceedings included unambiguous evidence that North Carolina legislators intentionally and effectively drew their own districts for partisan advantage in violation of the North Carolina Constitution and a battle of experts that was catastrophic for the defendant legislators. Common Cause is challenging districts as a violation of the North Carolina Constitution’s Equal Protection (Art. I, § 19), Free Elections (Art. I, § 5), Freedom of Assembly (Art. I, § 12), and Freedom of Speech (Art. I, § 14) clauses.

The trial began with an opening statement from the plaintiffs’ attorney Stanton Jones, who described the outcome Republican legislators succeeded in accomplishing with the districts they drew: “Because of the extreme gerrymandering, Democrats cannot win a majority,” and the maps “are impervious to the will of the voters.” Referencing the files of Thomas Hofeller, the gerrymandering guru who helped Republicans rig maps in North Carolina and other states, Jones added that the files provide “direct evidence…that partisan 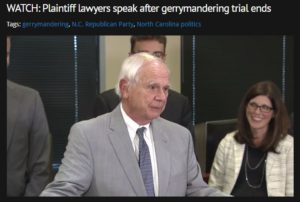 gain was his singular objective.”

In the first day of testimony, Common Cause North Carolina Executive Director Bob Phillips detailed Common Cause’s consistent decades-long support for reform regardless of which party has been in the majority. Prior to 2010, when Republicans took control of the General Assembly for the first time in a century, Republicans such as current Senate leader Phil Berger and House Speaker Tim Moore backed redistricting reform. Now, Republican party leaders feel differently.

The plaintiffs called three expert witnesses who used different mathematical models that all pointed to the same conclusion: legislators intentionally discriminated against voters based on their political affiliation to preordain the outcome of elections in as many districts as possible. University of Michigan political scientist Jowei Chen, Duke University mathematician Jonathan Mattingly, and Carnegie Mellon mathematician Wes Pegden each used the neutral redistricting criteria laid out by the North Carolina General Assembly. Each expert concluded the same thing: all the maps legislators drew were extreme statistical outliers that could not have been created except to intentionally entrench extreme partisan advantage.

The plaintiffs also tapped Western Carolina University political scientist Chris Cooper to walk the court through the Hofeller files. Cooper showed how Hofeller color-coded Democratic, Republican, and swing areas down to the neighborhood level to show that “partisanship was front and center.”  The maps also revealed that Hofeller analyzed the districts using racial data – a criterion the North Carolina General Assembly expressly stated it would not consider. The maps the legislature enacted were nearly identical to maps Hofeller drew weeks before lawmakers held their first meeting in the special redistricting session.

The evidence from the Hofeller files also proved that, in July 2017, lawmakers misled a federal court. A three-judge federal district court panel ordered the state to draw new maps and hold a special election that year following a decision invalidating the legislative maps as a racial gerrymander. Lawmakers asserted to the court they needed more time and could not hold a special election in 2017, though the Hofeller files proved that the maps had been mostly completed. This denied the citizens of North Carolina a full year of government without the gerrymandered legislative super majorities, a year where lawmakers forced policy decisions in veto-proof chambers, including voter ID, on the ballot.

Defense witnesses called to rebut these experts struggled to gain any traction in court. In the trial’s most unfortunate moment for the defense, one defense expert had a significant portion of his testimony thrown out almost immediately. Douglas Johnson of the Rose Institute of State and Local Government testified that Thomas Hofeller’s partisan maps more closely resembled maps drawn in Common Cause simulations than what legislators ultimately approved. However, on cross-examination, Johnson revealed that he failed to include in his analysis 11 approved districts that were identical to those in Hofeller’s file. When asked to defend his incorrect numbers during cross-examination, Johnson responded that, “I can tell you the idea is true.” 🤯 Johnson’s admission that his data was incorrect led the three-judge panel to strike all of his testimony comparing the maps that legislators approved to maps drawn by Hofeller and in Common Cause simulations.

University of West Georgia political scientist Karen Owen, a defense rebuttal witness, responded to the detailed statistical analyses presented by the plaintiffs’ experts by testifying about constituent services. Owen stated, without addressing the question of partisan electoral outcomes that is central to this lawsuit, that legislators represent their constituents effectively by providing constituent services without asking about party affiliation. On cross-examination, Owen revealed that she had not spoken to any North Carolina voter, legislator, former legislator or 2018 candidate for her research and that she had not done any substantial North Carolina-specific research.

Economist Janet Thornton, another defense witness, critiqued the methodology of the plaintiffs’ witnesses. However, in a different partisan gerrymandering trial in which Thornton testified on behalf of defendant legislators, a three-judge federal panel in Ohio rejected Thornton’s critique of plaintiffs’ expert testimony. The judges stated in their opinion that the analysis should receive “no weight.” On cross-examination in this case, Thornton stated that she had no suggestions for plaintiffs’ expert witnesses for improving their methodology and did not re-run their simulations with improved information.

To sum things up, with three separate statistical analyses and a close examination of the files created by the person who drew the districts, the plaintiffs demonstrated that discriminating against voters based on partisanship was the map-drawers’ primary motivation. The defense responded with rebuttal witnesses whose testimony was either thrown out, unrelated to the question at hand, or derived from almost no interactions with the data and methodologies deployed by the plaintiffs’ experts. Both sides will submit their proposed findings of fact and conclusions of law to the three-judge panel by the second week in August. A decision in Common Cause v. Lewis could come as early as September with a likely appeal to the North Carolina Supreme Court, regardless of the outcome at trial.

#MoscowMitch: Joe Scarborough Lays Out the Threat to Democracy From Russia and the Senate