President Trump has sided with Vladimir Putin over the US intelligence community about Russia's influence on the 2016 election. With police cracking down on public dissent in Moscow and efforts in the US to curtail protest, engineer minority rule, consolidate media ownership and concentrate wealth into fewer and fewer hands, is Russia Trump's model for America's future? 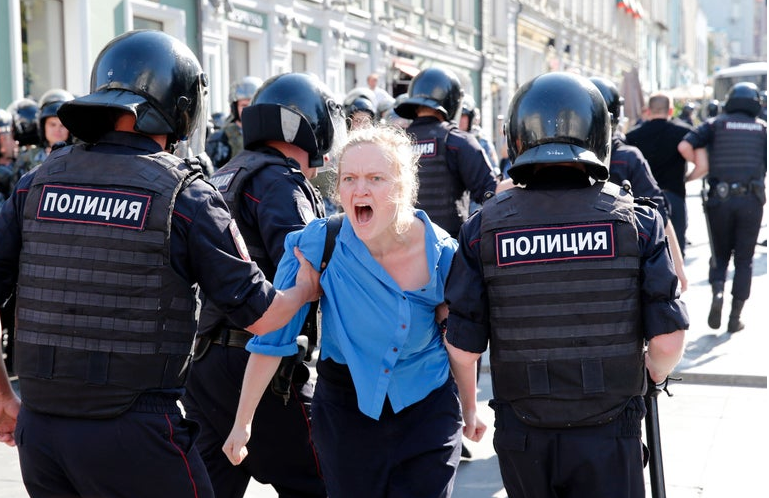 A democracy only truly serves the people when it is free and inclusive.

No one has ever confused Russia’s government with democracy, despite the window dressing elections they hold.

With democracy under attack around the world, it is important to look closely at governments that put up the appearance of democratic legitimacy, while reality shows that the voice of the people is being suppressed. It’s also important to note that democracies around the world are increasingly influenced by outside forces. Russia’s stated goal of influencing the 2016 presidential election in the US was to “destabilize American democracy,” as Vladimir Putin said. The Russian government is working to promote fringe right-wing parties in Italy, Germany, and other European countries.

Over the weekend, the infringement of democratic rights in Moscow became alarmingly visible.

Almost 1400 protestors were detained by Moscow police on Saturday for participating in a rally in defense of fair municipal elections. Although 45 city council seats will be on the ballot this September, election authorities have banned several opposition candidates from running.

Thousands of people (official reports say around 3,500 but footage suggests the number is closer to 8,000) mobilized in response to the election restrictions. Opposition leader Alexei Navalny was arrested for calling for the demonstration and will be in jail for 30 days.

Russia has not seen this number of detentions at a protest this decade. The police responded aggressively to the protest, injuring several demonstrators. The United States embassy in Moscow has condemned this “use of disproportionate police force.” President Putin did not comment on the weekend’s events.

If you don’t think those things could happen in the US, think again. Since November 2016, 100 bills limiting the right to peacefully protest have been introduced at the state and federal level. Democracy has been threatened by other means as well:

President Trump has shunned democratic allies while cozying up with dictators like Turkey’s Erdogan, who ordered protestors — most of whom were American — to be physically attacked.

He praised the Crowned Prince of Saudi Arabia at the G20 Summit, despite his direct role in the killing of Washington Post journalist Jamal Khashoggi. And despite two years of the Mueller investigation, the Trump Administration still has undisclosed relationships with Russia and the links between his campaign and the Russian efforts to help him get elected are unclear.

What is clear is that Senator Mitch McConnell has now prevented two major election security bills — the For the People Act and the SAFE Act — from being voted on in the Senate. Is his silence bought by a  $200 million investment that is headed to his home state of Kentucky in the form of an aluminum plant owned by a Russian oligarch?

What is also clear is that the Trump Administration is making a move on the Director of National Intelligence, replacing Dan Coats with John Ratcliffe, who has said accused Robert Mueller of “of violating ‘every principle in the most sacred of traditions’ of prosecutors” through his report, ignoring the well-documented attacks on our democracy by Russia as outlined by the Special Counsel’s report. That appointment will be important because one other thing the Trump Administration has done is to issue Executive Order 13848, which grants authority to the Director of National Intelligence to conduct an assessment to determine whether a foreign government interfered with an election no later than 45 days after the election.

It was the intelligence community that alerted us to Russia’s attacks in 2016 — now imagine 2020 and a president who has been the least popular, never cresting 43 percent approval ratings, wins re-election despite trailing the entire election and a Trump loyalist as DNI says — no problem here, no Russian influence.

With right-wing authoritarian parties on the rise, seemingly all connected to Russia, and the refusal of the Trump Administration to disclose all of their ties to Russia, plus efforts in the United States to clamp down on peaceful protest, direct democracy through ballot initiatives, make voting harder in some communities, and engineer minority rule through gerrymandering, it is time for every American to see that there is far more than political party preference at stake. What is at stake is the people’s right to be heard, protest the government, and have a say in charting a course for the future with our free speech and our equal vote and voice.

Peaceful protest should be respected, regardless of where it occurs. In order to preserve the rights of the people, the integrity of every election, every voter, and every ballot, around the world must be protected.

Gerrymander Gazette: The Next Legal Frontier is Here Edition