“Motor Voting”: When Will it Be New York’s Turn?

This year, both Oregon and California (most recently) passed automatic voter registration bills that streamline the voter registration process. More and more people are calling on their elected officials to make it easier to vote and participate in government. In fact, there is a shifting narrative happening, where people are putting the responsibility on the State to register voters, rather than on individuals.

New York State could do the same, by simplly creating one form that covers both driver’s license applications and voter registration.

In Oregon, when residents fill out a form to obtain a diver license or state ID, their information is automatically forwarded to the county elections office, where it is used to register them to vote.  The county election office later sends a mailing that gives the person the options of affiliating with a political party or opting out of the voter registration.

In California, the option to opt out of registering to vote comes earlier in the cycle; it’s included in the process of obtaining a driver license or state ID.  If the resident does not opt out, their information is sent to the Secretary of State, where their voter registration is completed.  The resident is later mailed a form that gives them the option to affiliate with a political party. 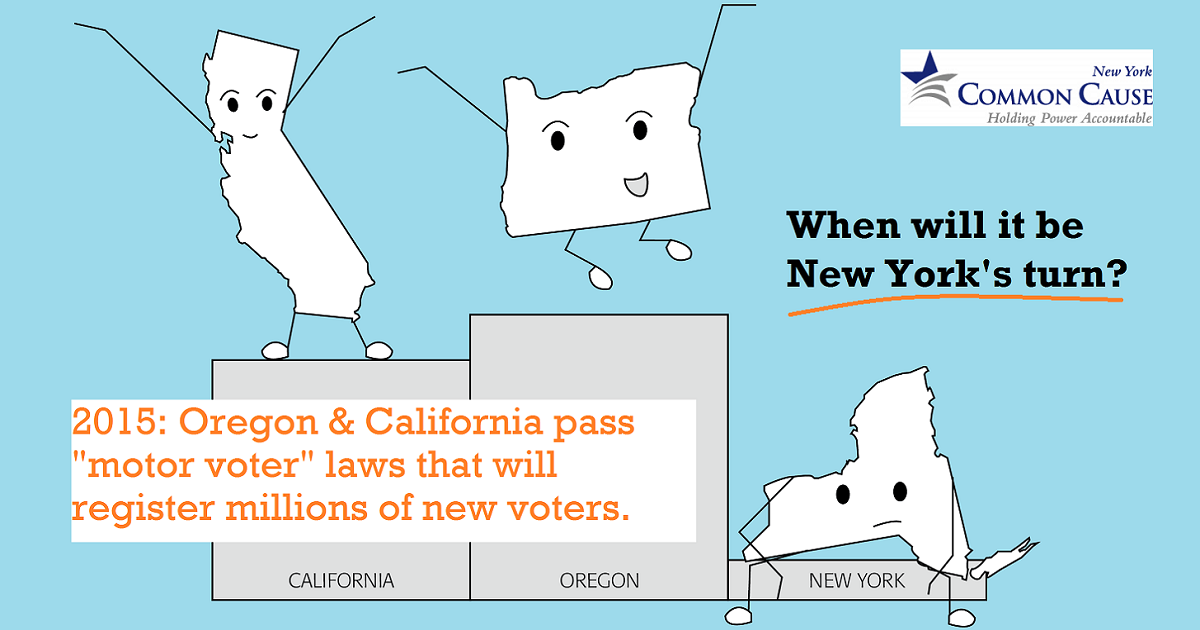 When will it be New York State’s Turn?

Currently, New York State residents can register to vote through the Department of Motor Vehicles (DMV), but the form is separate from the application for a driver’s license or ID card.  This form is available both online and in person.  Once the voter registration form is filled out, the DMV sends it to the County Board of Elections for review.  The County Board of Elections will then notify the registrant within 6 weeks if their application was processed successfully or if more information from the registrant is needed.

The New York State Senate and Assembly are both reviewing bills that could bring an Oregon-style automatic voter registration system to New York.  The senate and assembly bills are both in committees, but as they are currently written, they would streamline the voter registration process by sending the county board of elections the resident’s information, taken from the form used to obtain a driver license or a state ID.  Residents would later be sent a form giving them the option to opt out of the voter registration altogether or to take the next step and affiliate with a political party – so they can vote in New York’s party primary elections.

How Else Can New York State Catch-up?

If New York State wants to easily add nearly 2,000,000 voters instantly, there is Senate Bill that has been introduced each of the last three years called the Voter Empowerment Act which would do just that.  This bill would automatically register eligible consenting citizens at designated government agencies (not just the Department of Motor Vehicles), automatically transfer the voter registration of New Yorkers who move within the state, make it easier to register to vote online, allow pre-registration of 16- and 17-year-olds, and allow residents to register or change their party affiliation later in the election cycle.

The current online voter registration form requires that applicants already have a record with the DMV that includes a signature.  This creates an unnecessary barrier for those who want the benefit of online registration, but have never previously used DMV services.  Common Cause New York has previously endorsed Kirsten Gillibrand’s proposed bill that would require all states to allow online voter registration without the prerequisite of a “wet signature,” meaning an in-person, on paper signature.

People across the country, and in New York, are realizing that elections have not kept up with our changing society. Voter turnout is an issue nearly everywhere, and New York State ranks near the bottom of all states each year.

Sign the petition today: Join us in calling on Governor Cuomo to help modernize our elections!