Columbus, OH — Today at the Ohio Statehouse, the Fair Congressional Districts for Ohio  Campaign Committee announced an official kickoff to the signature collection drive to put the issue on the ballot.

“Following the unanimous Ohio Ballot Board approval of the ballot initiative, the Fair Congressional Districts for Ohio Campaign Committee is eager to get to work to ensure Ohioans have an opportunity to vote on this critical issue,” said Ann Henkener with the League of Women Voters in Ohio. “Many of us have been working on this reform for years. It’s time to get it done.” 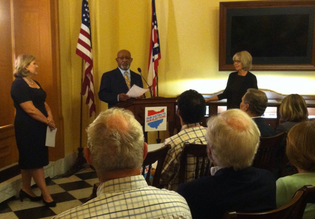 The Fair Congressional Districts for Ohio ballot proposal is modeled on 2015’s Issue 1, which won with overwhelming and bipartisan approval from voters, established the bipartisan Ohio Redistricting Commission, and created rules for the Ohio General Assembly district maps.

With a requirement of collecting 305,591 signatures of registered voters in order to appear on the ballot, the Fair Congressional Districts for Ohio Committee and redistricting reform advocates from all over Ohio will get to work to ensure Ohioans have an opportunity to vote for fair congressional mapmaking and more accountable representation.

“Way too often, we at the OEC find ourselves fighting legislation that runs contrary to what we know Ohioans want and believe when it comes to environmental protection,” said Heather Taylor-Miesle with the Ohio Environmental Council. “Fair districts will encourage more competitive elections that will ultimately lead to a more representative government and policies that actually reflect the will of the people.”

“For too long district lines and elections have been manipulated by one political party or the other. This has led to ‘safe’ seats for politicians, who aren’t accountable to the voters here at home. Gerrymandering ignores the will of the people,” said Sam Gresham of Common Cause Ohio. “We can’t keep waiting for the Ohio General Assembly to give us true representational democracy. Now is the time for the people to come together and demand fair districts and fair elections.”

The photo from left to right: Heather Taylor-Miesle, Sam Gresham and Ann Henkener.

For more information about the proposal and upcoming events and trainings, visit the Fair Districts = Fair Election Coalition’s website fairdistrictsohio.org.