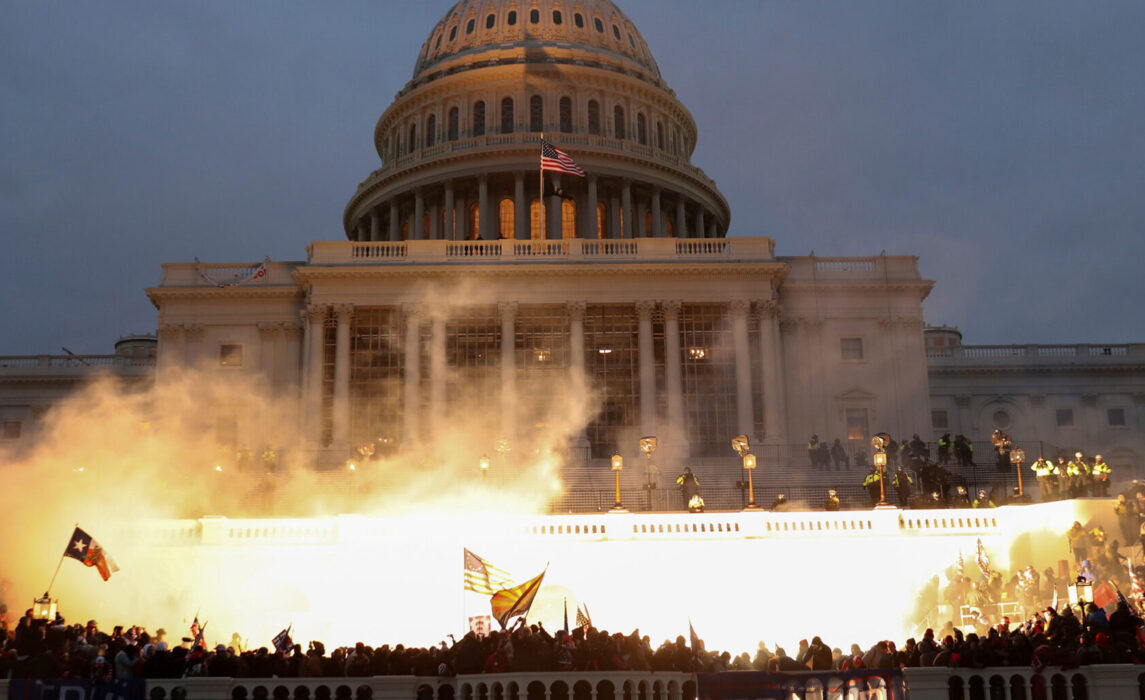 About one month ago, staffers for House Speaker Nancy Pelosi piled office furniture against a door, sculpting a makeshift barrier of desks, chairs, and tables. They crouched silent and motionless like statues as they heard the mob pounding on that door and raiding the office of the Speaker of the House, bellowing “Where’s Nancy?” In the chamber nearby, other representatives wore gas masks as they quietly sheltered on the floor. Outside, chaos reigned. A noose swayed in the wind. A sign read “Off with their heads. Stop the steal.”

On January 6th, our Capitol and our democracy were attacked with impunity. A month later, our nation has failed to address the gravity of what transpired.

Time doesn’t and shouldn’t heal all wounds, especially not ones that plunged so deep into the heart of our democracy. Every day since the insurrection has delivered one horrific revelation after the next. Five people died. More than 100 police officers were injured, with some engaging in hand-to-hand combat with insurrectionists. Two police officers later committed suicide (another turned in her gun, afraid of what she might do to herself). Whoever planted bombs at the RNC and DNC is still at large.

What came across initially as a riot of opportunity has, through charging documents filed by the federal government, revealed itself to be a menagerie of genuine assassination attempts, QAnon craziness, military cosplay, and internet trolls brought to life.

It was not — as the insurrectionists want judges presiding over their cases to believe — an earnest attempt to save the country.

It was an uprising of the duped.

The idea of two Americas has long existed in our political discourse, from Dr. Martin Luther King Jr.’s invocation of the phrase in the 1960s to refer to the “daily ugliness” of social inequality to presidential candidate John Edwards’ 2004 focus on the wealth gap in modern society. Those fractures exist to this day, but there is another fissure in our nation, too.

There are indeed two Americas today: one grounded on the firm foundation of reality and another in the supple quicksand of delusion, led deeper into it by America’s pied piper of lies Donald J. Trump.  There is the America that recognizes that in the midst of a pandemic, we had the most secure and transparent election in American history. And then there is the America that was fed the Big Lie, devouring it with the famished appetite of those who consume Breitbart, Alex Jones, and other substance-free junk “news” sources.

It’s no surprise that there was such an appetite for such a vile claim. After all, what we saw transpire at the Capitol was the culmination of years of a reality show presidency defined by concocting “alternative facts” for political gain. That Donald Trump’s term would end with a QAnon shaman chanting on the Senate floor while men with zip ties hunted down lawmakers is both the most outlandish and most appropriate ending to a presidency vignetted with scenes of the unfathomable.

The man with the zip ties and body armor was combat veteran Larry Rendall Brock Jr., a retired lieutenant colonel, one of many former and current military members who participated in the insurrection. But the vast majority of people there were normal Americans engaging in a very abnormal act.

These are the same people who on Facebook sandwich diagrams of the “microchip in the Bill Gates vaccine” between photos of smiling grandkids and saccharine Minion memes. They were friends and family radicalized in plain sight, with social media companies peeking through a blindfold of blamelessness to check on clicks and ad revenue.

The Pennsylvania mother of eight who used a battering ram to break windows and gain entry to the Capitol. The Florida stay-at-home dad of five who smiled and waved at the camera as he paraded off with Speaker Pelosi’s lectern. The Texas realtor who charted a private plane to storm the Capitol and livestreamed herself among the chaos: “We just stormed the Capital [sic]. It was one of the best days of my life!” (she also pitched her realtor services mid-insurrection). The Beverly Hills salon owner who flew to Washington, “put on her Chanel boots and a Louis Vuitton sweater,” picked up a bullhorn and urged the mob to bring weapons into the building: “We need weapons. We need strong, angry patriots to help our boys…”

Those “boys” — the predominately White, male crowd that led the attack — included the Proud Boys, a group that was labeled a terrorist organization by Canada this week and was advised by Trump three and half months earlier to “stand back and stand by.” Those “boys” and others prowled the halls of Congress, growling for the whereabouts of the Vice President and America’s most powerful woman while Pelosi’s own colleague, newly minted QAnon Rep. Lauren Boebert, livetweeted Pelosi’s movement from the House floor.

One of the most frustrating aspects of this dark chapter in American history isn’t just that our nation’s capitol was breached for the first time since 1812, but that the perpetrators were so effortlessly able to commit that atrocity with impunity. We watched in stunned disbelief as they marauded through the hallowed halls of the Capitol building. Later, they streamed out, cloaked in racial and political privilege, beaming and empowered — validated in a sick belief that their desecration of our nation’s most symbolic spot was somehow a valiant act of honor.

Some arrests were made that day, but privilege and security failures ensured that almost all migrated back to their corners of America — back to big cities and small towns alike — gushing with pride. They gave interviews to local news stations, with many defending their actions, defiant in their sedition, and innocently proclaiming that they were simply following Trump’s call for action. And the most audacious aspect of it all is that these insurrectionists who so victimized our democracy have been proclaiming themselves the victims — lamenting one-star Google and Yelp reviews for their businesses, pouting that friends and family are treating them differently now, and lambasting their addition to no-fly lists. How dare the consequences of their own actions cast a shadow upon the brilliant light of their “revolution.”

But the fact remains that out of the thousands who rioted in DC on January 6th at Trump’s direction, out of the hundreds who actually broke into the Capitol, and out of the dozens that were seriously plotting more violent ends, only a fraction of them will ultimately feel the weight of justice. Some have been arrested. Some have been fired. But for most, life goes on. Insurrectionist one day, neighbor the next.

And for the chief instigator of it all — Donald Trump — an impeachment from the House, yes, but little chance of accountability in the Senate. Almost all Republican senators are sure to vote against convicting Trump on the single article of insurrection. Senators like Josh Hawley (R-Mo.) — who raised his fist in solidarity with the mob — may not sympathize directly with the insurrectionists but surely realize that those same people who held spear-tipped Trump flags on the Capitol steps hold the key to any future in the Republican Party. “Unity,” they say, precludes accountability.

Most Americans learn of Abraham Lincoln’s “house divided” speech in school, but many do not realize that Lincoln warned not of a breakup of the country but of what happens when an immoral but powerful idea (then, slavery) takes hold across the land: “A house divided against itself cannot stand….I do not expect the Union to be dissolved — I do not expect the house to fall — but I do expect it will cease to be divided. It will become all one thing or all the other.”

We cannot let America become all-encompassed by an ethos that at worst, embraces insurrection and at best, regards it with a shrug. We cannot accept as a value in our society the rejection of the rule of law, of ethical norms, and of reason.  When dangerous fringe ideas are no longer fringe but are so woven into the fabric of acceptability that their adherents are applauded by half of the Republican House caucus with applause echoing to the rafters…that is the nauseating sound and anthem of America’s decline. 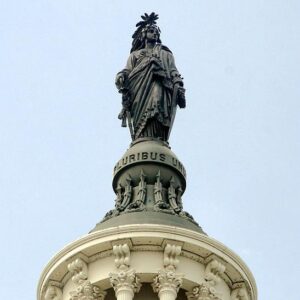 Above those rafters, atop the Capitol dome, is perched a magnificent statue, the Statue of Freedom. She is armed for battle but stands perpetually in a position of peace, wearing a starred helmet and holding a sheathed sword at her side.  She stands upon a globe bearing the phrase E Pluribus Unum.  A slave, Philip Reid, worked on the masterpiece. Purchased for $1,200, he was finally a free man by the time it was lifted into place in 1863. Surely he could never fathom that the flag of the Confederacy would proudly be flown in her shadow 158 years later.

The statue’s gaze looks east. Below her eyes are the doors of the East gate that were breached in the battle between reason and delusion. Ahead, the rising sun. And a decision point for our country.

Out of chaos, peace.

Out of many, one.

Testimony of Jay Young, Executive Director, Common Cause Illinois Before the Senate Committee on Redistricting March 25, 2021

What a new administration means for census & redistricting