A new Common Cause analysis shows that the top 25 federal government contractors contributed more than $30.6 million to influence the 2014 congressional elections.

In his recent State of the Union address, President Obama asserted that “a better politics is one where we spend less time drowning in dark money for ads that pull us into the gutter.”

The next day, on the 5th anniversary of the U.S. Supreme Court’s Citizens United decision, the White House released a similar statement calling for an end to dark money politics, saying the ruling “caused real harm to our democracy.”

But actions speak louder than words. One of the few things President Obama could do to shine light on dark money and help stop pay-to-play Washington politics is to issue an executive order requiring federal government contractors to disclose their political contributions to dark money groups.

All corporations, including those that contract with the federal government, are required to disclose how much their corporate PACs give to candidates for office, party committees, or other political committees registered with the Federal Election Commission.

A new Common Cause analysis shows that the top 25 federal government contractors contributed more than $30.6 million to influence the 2014 congressional elections.

But that’s just the money we know about — our analysis doesn’t include what these corporations gave to dark money groups. Despite the fact that these groups spent over $170 million to influence the 2014 congressional elections, they don’t have to disclose their donors — so we’re all left in the dark.

President Obama could fix that. An executive order could not only reveal who’s behind the flood of attack ads we see every election, but also put a stop to quid-pro-quo contracting. The public might not know who’s behind these dark money groups, but politicians they support may.

The public has a right to know if a corporation seeking a multi-million dollar contract with the U.S. government is secretly funneling money to a group that will benefit or attack lawmakers who are tasked with deciding which company gets the contract. 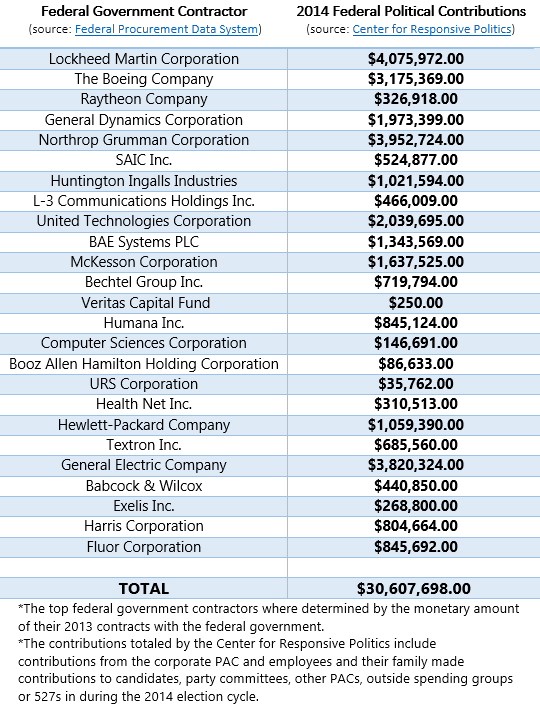