Dozens of activists from Common Cause and partner organizations rallied against big money in politics today at Lafayette Square, wedged between the Chamber of Commerce and the White House, on the fifth anniversary of the Supreme Court’s Citizens United ruling.

Dozens of activists from Common Cause and partner organizations rallied against big money in politics today at Lafayette Square, wedged between the Chamber of Commerce and the White House, on the fifth anniversary of the Supreme Court’s Citizens United ruling. Decrying the influence of corporations, SuperPACs, and other large business organizations over the political process since the ruling, workers, activists, and religious and congressional leaders held a protest on one such organizations’ front porch.

People of various backgrounds spoke at the rally, from Public Citizen President Rob Weissman and Jobs with Justice Executive Director Sarita Gupta to Walmart employee Fatmata Jabbie and Minnesota Representative Keith Ellison, representing a broad coalition in favor of retaking our democracy. In conjunction with this varied coalition was a variety of ideas about how to do so. Ideas floated around included a constitutional amendment, public disclosure of donations, public financing of elections, and more.

Fatmata Jabbie, who works at a Walmart store in Alexandria, Virginia, spoke about the difficulty of living and raising a family while making only $8.40 an hour. Jabbie connected her low wage to the influence of the Walton family, which owns Walmart, over congressional officials, citing outrageous political spending by the family in recent years, especially since the Citizens United ruling. Despite large public support across party lines for raising the minimum wage, she said, Congress has refused to act, likely due to the Walton family’s influence over the political process. A 2013 Making Change at Walmart report found that the Walton family and the Walmart PAC gave more campaign contributions to candidates who opposed raising the minimum wage. 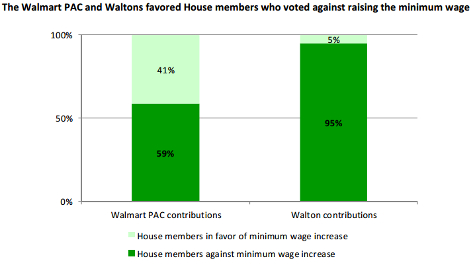 Another speaker at the rally was Congressional Progressive Caucus Co-Chair Rep. Keith Ellison, who today introduced the Protect Democracy from Criminal Corporations Act, which would prohibit corporations guilty of wrongdoing from donating money to campaigns on the local, state, and federal level. Ellison stated that fines on corporations guilty of criminal wrongdoing, like those levied on BP when it plead guilty to 12 charges including obstruction of a congressional investigation into the 2010 oil spill, don’t do enough. Rather, these corporations should be barred from donating money to campaigns, to prevent them from influencing our politics.

“Some of the resulting $700 million raised by SuperPACs in 2014 came from companies that conspired to defraud the federal government or committed other felonies involving dishonesty or breach of trust,” Ellison said. “Until we restore the power to people and reverse the decision in Citizens United, companies that break the law shouldn’t be allowed to flood our democracy with dirty money.”

At the end of the snow-packed rally, Pastor Eugene Edward Wilson Jr. of the Church of Christ spoke of the struggle oppressed people have faced in America throughout history, from slaves to women and LGBT peoples, reciting the Langston Hughes poem “Let America Be America Again.” “America was never America to me, and yet I swear this oath – America will be,” he chanted.

After the rally, protesters marched with Wilson to the Church of Christ for a discussion on money in politics and goals for the movement ahead.