Taking Action to Stop Facebook Ads that Could Confuse Voters 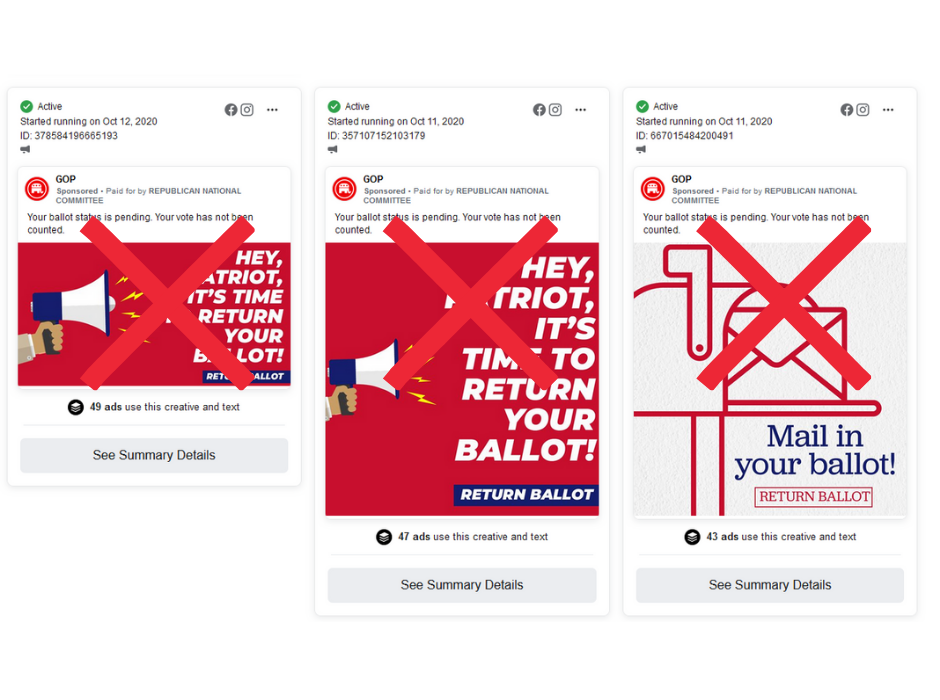 On Monday October 12, Common Cause’s Stopping Cyber Suppression program received an alert from our allies at the Leadership Conference on Civil and Human Rights. They had heard that some voters in Michigan were seeing ads on Facebook saying “your vote hasn’t been counted.” This was concerning on multiple levels as it was confusing voters and potentially encouraging them to vote twice.

We used our advanced ad searching tools and we found ads that did in fact say this. The ads also looked to be targeting Florida and Michigan primarily – key swing states.

In previous years, Election Protection has received calls from confused voters who received flyers and mailers from political parties and candidates with similar messaging. Candidates and parties use messaging about “your vote has not been counted” as a “get out the vote” strategy. But voters are often alarmed and confused when they see these messages.

When these messages appear online, it is even more concerning because it can easily spread. In this example, the ads are telling people their ballot status is pending and their vote has not been counted. This is an alarming message and confusing to voters who may have already voted, sent in an absentee ballot — or hadn’t actually done those voting activities yet.

We reported these ads to Facebook because they violate the platform’s election policy on interfering with the voting process: people could see this and believe their already-cast vote hadn’t been counted, won’t count, or was discarded.

These posts could also persuade voters to attempt to vote twice to make sure their vote counts which is not only illegal, but creates mistrust in the system and could clog up an already full system that workers are trying to process.

The ads were misleading and had the potential to cause confusion to voters. We believed the ads should be removed before they confused and misled large audiences.

Facebook agreed that the ads did in fact violate their ad policy and took down the ads on Monday!

Our appreciation to the Leadership Conference for their alert. This example shows the power of the Election Protection coalition where organizations are able to quickly share tips on disinformation that result in action to remove content that could be damaging to voters.

Last point: if these ads were in violation of their policies, it is concerning that they were allowed to run. Facebook must enforce their own policies and train their moderators to reject ads that violate their policies before they appear on the site.

If you are concerned about disinformation on tech platforms targeting voters or want to volunteer in this election cycle, sign up at www.protectthevote.net! Also, if you or someone you know experiences issues voting, you can call the non-partisan voter hotline 866-OUR-VOTE (866-687-8683).

Why Ethics Are Essential