The Supreme Court decided it would let partisan gerrymandering go unchecked. But the courts aren’t the only path to fair districts. Leaders on both sides of the aisle are chiming in on the issue, and calling out the Supreme Court for its historically bad decision. 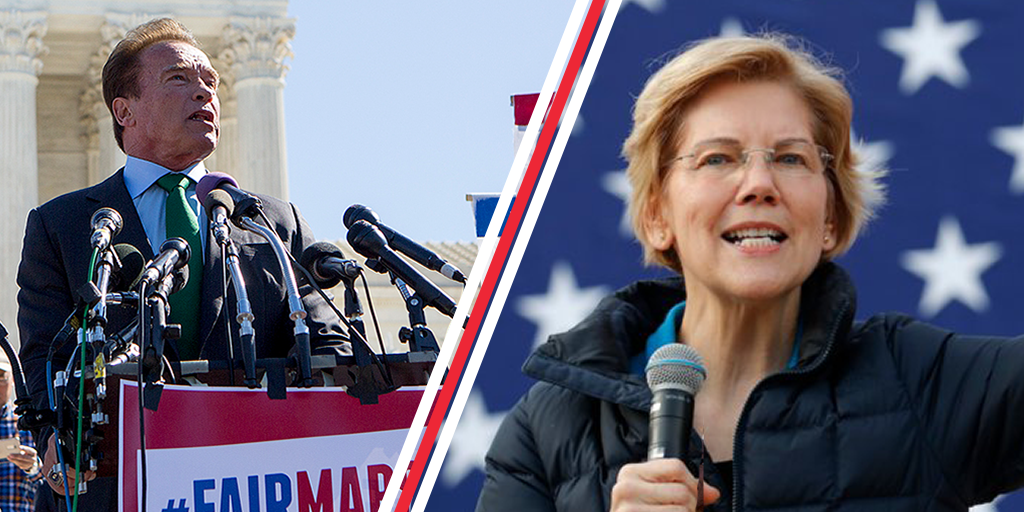 The U.S. Supreme Court issued a bad 5-4 decision in two landmark gerrymandering cases—giving politicians the green light to draw rigged maps in states across the country. The cases, Common Cause v. Rucho and Lamone v. Benisek, hoped to fix partisan gerrymanders in North Carolina and Maryland, respectively—where both Democrats and Republicans had rigged electoral maps in their favor.

Activists assembled on the court’s steps, advocates made waves in the press, and some politicians have sounded off to call out the Supreme Court on its disastrous decision.

As the justices hang up their robes for the summer, the fight for fair maps and representation continues—with quite a few Democrats and Republicans stepping into the fray. Let’s take a look at what some of the big names are saying.

Among the crowded 2020 Democratic presidential field, Sen. Elizabeth Warren started her own mini-thread, where she called out the Supreme Court and called for more independent redistricting commissions in the states. Sen. Kamala Harris took a firm stance too, and declared that “banning partisan gerrymandering will be a top priority” for her as president.

The Supreme Court's decision is an abomination. Five Republican-appointed justices gave the green light to partisan gerrymandering—which lets Republicans pursue their extreme agenda without accountability to the people. It's bad for our democracy and we need to fight back.

Politicians shouldn’t be able to pick their voters, voters should choose their representatives. The Supreme Court's gerrymandering decision will have drastic consequences for the future of our nation. As president, banning partisan gerrymandering will be a top priority.

Sen. Michael Bennet answered the call when asked by Common Cause what he would do to end partisan gerrymandering too–coming out firmly against the court’s decision.

I 100% disagree with the Supreme Court's decision. They've thrown up their hands and given up on democracy.

That’s why I have a plan to ban partisan gerrymandering. Voters should choose their representatives, not the other way around.https://t.co/58Bc7FAiz9 https://t.co/7qxj6CRtcO

Former Vice President Joe Biden and Sen. Bernie Sanders had tweets of their own, calling out the Supreme Court for letting state politicians for “rig our democracy.”

Today the Supreme Court refused to stop politicians rigging our democracy by writing election rules for their own benefit. It couldn’t have happened without Justices put there by Donald Trump and Republicans — another reason why Democrats must take back the White House in 2020.

Today, the Supreme Court gave Republican politicians across the country the approval to rig our democracy and suppress voters with racist, gerrymandered maps. This is is not what democracy is about. We can take back power by registering and mobilizing new voters. https://t.co/JBIgSO2kmh

As did former presidential candidate Hillary Clinton, referencing the disproportionate impact gerrymandering has on communities of color.

There's ample evidence that Republicans in office have pursued gerrymandered maps to shut out people of color from our political process. I'm disappointed but not surprised about today's anti-democratic decision.

Speaker Nancy Pelosi and Senate Minority Leader Chuck Schumer called for action as well. Pelosi issued a statement connecting the issue back to H.R.1, the For the People Act, which would require states to set up independent citizens redistricting commissions.

The Supreme Court’s decision greenlighting the unjust and deeply dangerous practice of #gerrymandering strikes at the very heart of our American democracy. Congress must act. https://t.co/430vttRS4F

Today’s Supreme Court decision to allow hyper-partisan gerrymandering is a devastating blow to our democracy, and the American people, particularly communities of color, will greatly suffer because of it.

Eric Holder, the former Attorney General under President Obama who has since made gerrymandering his top issue, tweeted out his own message—reminding us that the states and the people can still fix redistricting without the court.

Let me be very clear. In spite of the troubling Supreme Court gerrymandering ruling we continue to fight. We still have both more tools and the strong will to bring fairness to our democracy. We need concerned citizens to join us. Nothing worth having comes easy. We can do this

But it wasn’t just Democrats calling out the court on for ducking its responsibility to bring justice to North Carolina and Maryland voters. Former California Governor Arnold Schwarzenneger tweeted out a thread of his own, pointing out that “this isn’t the end of our fight to terminate gerrymandering.”

While I’m disappointed with the Supreme Court’s decision, this isn’t the end of our fight to terminate gerrymandering.

He even threw in a gif for good measure.

Former Ohio Governor and GOP presidential candidate John Kasich took to Twitter as well, pointing out the power states have to end gerrymandering, regardless of the Supreme Court’s decision.

The Supreme Court has ruled. Now states need to minimize gerrymandering like we did in Ohio to have a more effective political system. #Gerrymandering #SCOTUS

As did two Republican officials from Maryland, where Democratic maps were recently challenged. Governor Larry Hogan and U.S. Congressman Andy Harris pointed out how both parties are guilty of gerrymandering today.

Today’s ruling was terribly disappointing to all who believe in fair elections. I pledge to vigorously continue this fight, both in Maryland and across our nation. Gerrymandering is wrong, and both parties are guilty. https://t.co/BhRqRPzIIo

My statement on the Supreme Court’s #gerrymandering decision today: pic.twitter.com/90mdnPb72O

As the Twittersphere erupted following the Supreme Court’s decision, one thing was made especially clear: the bipartisan push to stop gerrymandering and draw fair maps is far from over.

Learn more about what we’re doing to end gerrymandering, and sign our pledge to tell your lawmakers that fair maps matter.