More than 80 percent percent of Americans support regulations that would keep the Internet open to everyone. But net neutrality is hanging by a thread, as telecom industry giants and the anti-net neutrality lobby spent more than $42.8 million on the 2014 elections to elect candidates who would give them free rein to eliminate important consumer protections and establish fast and slow lanes online. 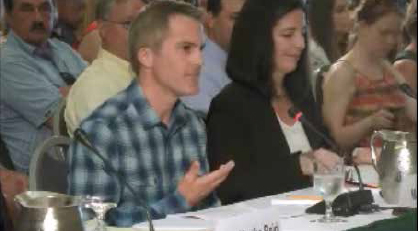 In fall of 1945, Vrest and Mildred Orton started selling hard-to-find items through a catalog printed on a printing press in the Orton’s garage in Weston, Vermont. Seventy years and three generations later, the couple’s three grandsons — Gardner, Eliot, and Cabot — run The Vermont Country Store, employing more than 450 people in their home state. Today, a growing portion of their business, 40 percent, comes from Internet sales. Like many small businesses, the Vermont Country Store relies on the Internet to compete in the new age of retail and consumer products.

Cabot Orton recently testified in support of open Internet protections at a Senate Judiciary Committee field hearing in Vermont. “We don’t want to imagine an America with two Internets: a fast one for giant corporations and a slow one for everybody else,” Orton said. Orton added that he supports net neutrality protections “to safeguard Internet commerce from a troubling future” and “to guarantee that every person with an idea and real perseverance has a fair shake at achieving the American dream.” As a small business owner, Orton and his family need net neutrality, which he says will “keep the biggest corporations from gaming the system and seizing unfair access to Internet fast lanes, simply because they have the money to buy them.”

Recent polling shows open Internet protections are supported by 81 percent of Americans. But, to no one’s surprise, telecom industry giants vigorously oppose real net neutrality protections that classify the Internet under Title II of the Communications Act so the Internet is treated like a utility, with the same service guaranteed to every customer. That opposition is backed up by some serious political cash. Common Cause estimates that Comcast, AT&T, Verizon, Time Warner Cable, and the National Cable & Telecommunications Association made more than $42.8 million in political contributions to state and federal candidates during the 2014 election cycle. Members of congressional committees that oversee Internet regulation received more than $1.8 million of that money.

The largest telecom spender was AT&T, which spent $11.3 million on state campaigns and more than $4 million on federal races. Comcast ranked second, with $7.3 million in state contributions and close to $4.5 million in federal contributions. These totals do not include money these companies and related trade groups funneled to dark-money political nonprofits that are not required to disclose their donors. 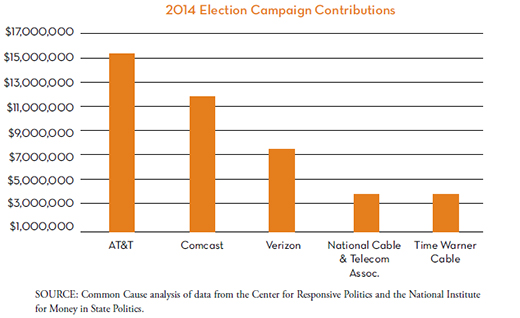 Who Got The Most?

The top recipients of big telecom’s funding on the federal level are party committees, and the industry spreads its wealth to Republicans and Democrats alike. Candidates receiving the most in 2014 include House Speaker John Boehner ($98,175 from Comcast) and then-Senator Mark Pryor of Arkansas ($88,650 from Comcast, TWC, and National Cable and Telecom Assn.).

At the state level, the largest recipient of telecom funds was the Florida Republican Party, landing contributions totaling $727,350 from Comcast, AT&T, and Verizon. Governors in California and New York, the only two states where public service commissions are reviewing the Comcast-Time Warner Cable merger proposal, also took big money from both Comcast and Time Warner Cable. New York Governor Andrew Cuomo received $60,800 from both Comcast and Time Warner Cable (totaling $121,600). California Governor Jerry Brown received $54,400 from Time Warner Cable and $27,200 from Comcast. AT&T also gave both Cuomo and Brown big donations ($108,800 for Brown and $56,500 for Cuomo).

The Koch brothers also have weighed in. The Sunlight Foundation reports that a group called “American Commitment” organized a letter-writing campaign to the Federal Communications Commission in opposition to net neutrality. American Commitment is a key organization in the Kochs’ network of dark money groups; nearly all of its known funding has come from other Koch groups, and it’s led by Koch political operative Sean Noble and by Phil Kerpen, the former vice president of Americans for Prosperity.

The future of the open Internet remains unknown. In 2014, after the U.S. Court of Appeals for the D.C. Circuit’s Verizon v. FCC decision, which threw out the FCC’s open internet rules, supportive members of Congress introduced a bill to reinstate open internet protections, but it feel victim to the same industry-backed gridlock that bottles up other positive reform measures. The FCC is set to issue net neutrality rules in early 2015, but Congress recently froze the FCC’s funding, making it harder for the commission to conduct its business.