When Santa isn’t busy fighting hand-to-hand combat in the War on Christmas™, he is of course focused on putting together a “naughty” and a “nice” list to see who gets presents and who gets a lump of coal this year. Thanks to an incredible amount of work by grassroots activists around the country to end gerrymandering and a vigorous defense of the status quo by the political class, the husky gentleman in the red and white outfit has his hands full when it comes to the famed redistricting subsection of the list. Let’s look at his final draft. 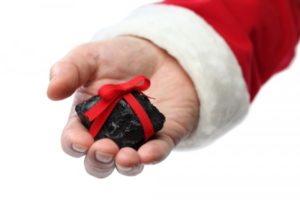 On December 5, the lame duck Michigan State Senate defied the will of Michigan voters by reinserting

themselves into the redistricting process. In this year’s general election, Michiganders passed Proposal 2 with 61 percent of the vote to strip legislators of the power to draw their own districts and Michigan’s congressional map by creating an independent citizens redistricting commission. The amendment strictly laid out the rules and processes that the commission must follow to draw districts fairly, impartially, and transparently – which included constitutional language that removed the legislature’s power to pass any legislation on redistricting.

After the election, the Michigan Senate demonstrated that they didn’t get the message that voters are just not that into them. Senators passed SB 1254, a bill that interferes with the redistricting reform amendment voters passed less than a month prior. As Voters Not Politicians has observed, this bill is unconstitutional, unnecessary, and unethical. Michiganders can contact their Michigan House members to urge a “no” vote and keep the House off of the naughty list.

The Ohio General Assembly placed a proposed constitutional amendment on the ballot to reform redistricting in February and the measure passed in May with almost 75% of the vote. An energetic effort by Fair Districts = Fair Elections to gather signatures for a separate ballot initiative to end gerrymandering in Ohio gave legislators the incentive they needed to act on the issue. Unfortunately, the lesson some legislators learned from this episode is not that they should have done the right thing to start with. Instead, they tried to make it harder for voters to pass ballot initiatives. HJR 19 would have required 60 percent support from voters to pass instead of the current 50 percent plus one requirement, placed a 180-day limit on signature gathering when none existed before, and established a deadline for submitting signatures that would have required the bulk of signature-gathering to take place during the coldest months. Thanks to the vigorous opposition of many Ohioans, the bill failed. However, the sponsors (State Reps. Sarah LaTourette, Glen Holmes) and co-sponsors (Reps. Niraj Antani, Scott Lipps, and Ryan Smith) still landed on Santa’s naughty list.

For their continued defense of a gerrymandered congressional 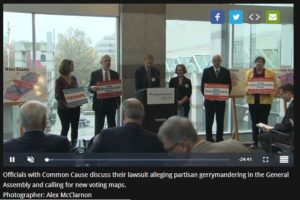 map and for drawing state legislative districts so bad that it earned them a new state court partisan gerrymandering lawsuit called Common Cause v. Lewis, the North Carolina General Assembly has landed on the naughty list. Legislators are appealing the plaintiffs’ trial court victory in the combined case of Common Cause v. Rucho and League of Women Voters of North Carolina v. Rucho. This appeal will set up a probable hearing in the Supreme Court next year and a possible ruling for the first time in U.S. history that partisan gerrymandering is unconstitutional. Judges have been selected to hear Common Cause v. Lewis, so we will now wait for a trial schedule to be set.

Michigan and Missouri Chambers of Commerce

Michiganders and Missourians almost didn’t get the chance to vote on redistricting reform measures this year because the Michigan and Missouri Chambers of Commerce sued to keep the initiatives off the ballot. Fortunately, the agents of the status quo failed in their efforts in both states. For attempting to thwart t

he will of 425,000 Michiganders and 344,000 Missourians who signed petitions to end gerrymandering in their states, the Chambers of Commerce in both states have landed on the naughty list.

Democratic leaders in the New Jersey State Legislature attempted to add a provision to the state constitution that would have allowed them to manipulate districts in their favor in the next round of redistricting. Fortunately, Fair Districts New Jersey and a coalition of many organizations around the state landed themselves on the nice list when they successfully organized to kill the bill.

The leadership in the legislature attempted to pass a nearly identical proposal in 2015, so reformers in the state hope New Jersey politicians have gotten the message and will support true reform next time.

On November 7, 2018 a three-judge federal district court panel ruled in Benisek v. Lamone that Maryland violated the First Amendment when it gerrymandered the state’s Sixth Congressional District to target a Republican incumbent for defeat. Then-Gov. O’Malley and the Democratic leaders in the General Assembly got themselves placed on the 2012 naughty list when they butchered the Sixth District to increase their share of Maryland’s eight congressional seats from six to seven.

Noting that partisan gerrymandering “is widely considered to be repugnant to representative democracy,” the trial court stated that Maryland violated Republican voters’ First Amendment representational right and right of association and that “these injuries were the direct result of the State’s purpose to convert the Sixth District from a solid Republican district to a Democratic district.” Maryland has appealed the decision to the U.S. Supreme Court, which is likely to hear the case in the spring of 2019. To the legal team at Mayer Brown and the plaintiffs who won this historic victory, Santa saved a spot for you on the nice list.

Pennsylvania’s congressional map was one of the most gerrymandered in the country following the 2010 redistricting cycle. Despite winning between 44 and 50 percent of the total U.S. House vote in each of the post-redistricting elections, Democrats consistently won only five of 18 seats. This skewing of the map was the clear intent of the Republican-led legislature. The legal team at the Public Interest Law Center saw that the strong pro-democracy protections in the Pennsylvania State Constitution provided an opportunity to challenge the map. They sued and they won when the Pennsylvania Supreme Court ruled that the congressional map violated Pennsylvanians’ right to “free and equal elections” under the state constitution. After the court ordered a redraw of the map, the 2018 election went differently. Democrats won a little over half of the vote (55 percent) and won half of the seats. For protecting the right of Pennsylvanians to fair maps, Santa has put the legal team at PILC and the plaintiffs on this year’s nice list.

Redistricting reform was on the ballot in an unprecedented five states in 2018 and it succeeded in all of them. In Colorado and Michigan, voters created new independent citizen redistricting commissions. In Utah, Proposition 4 created a strong citizen advisory redistricting commission.  In Missouri, Amendment 1 created a new nonpartisan state demographer position. In Ohio, Issue 1 mandated strong bipartisan protections to make it harder for one party to dominate the redistricting process.

To the citizens who pounded the pavement to collect signatures and inform the public, pressured legislators to put reform on the ballot, and voted for these democracy measures, Santa gives you a hearty thank you and a prominent place on the nice list. We hope America follows your lead in the new year.

Want to change how you receive these emails?
You can update your preferences or unsubscribe from this list.