Scott Pruitt, the administrator of the Environmental Protection Agency, is on the Trump administration’s endangered species list this morning amid more revelations about his ethical lapses and turmoil in the agency.

Pruitt’s latest problem is a New York Times report that at least five senior officials at the EPA were demoted or given administrative punishments after they raised questions about his management and travel expenses.

President Trump put in a good word for Pruitt, who is popular with the president’s political base, as reporters quizzed him Thursday during a flight on Air Force One. But White House officials refuse to comment on the EPA administrator’s future and Pruitt continues to draw flak for working out a sweetheart lease – $50 per night – on the Washington condominium he called his D.C. home for several months last year. His landlord there was the wife of an energy lobbyist and contributor to Pruitt in the EPA boss’s former capacity as Oklahoma’s attorney general.

Check out this Pruitt poster, photographed outside another Capitol Hill residence this morning. 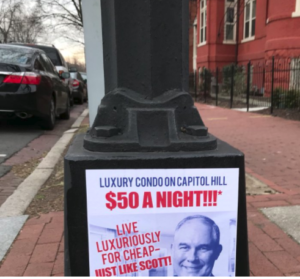 AZ Says No to Disclosure

Republican legislators in Arizona are giving a middle-finger salute to residents of Tempe, the home of Arizona State University and a progressive enclave in the usually red state.

The online magazine Salon reports that after a ballot initiative to require the public disclosure of any group spending more than $1,000 on a local election won the support of 91 percent of Tempe voters, the GOP-led legislature promptly passed a bill blocking enforcement of the requirement.

Gov. Doug Ducey, whose election in 2014 was fueled in part by millions of dollars spent on his behalf by groups that hide their donors, is expected to sign the legislation.

Salon notes that the Arizona bill is part of an unfortunate pattern in which conservative state legislators are acting to overrule the decisions of local elected officials in more progressive urban and suburban areas. In Arizona’s case, state legislators apparently believe it’s just fine to hide the identities of people who’re trying to influence votes and curry favor from elected officials.

Declaring “this court does not play games,” a federal judge in Florida has ordered Gov. Rick Scott and his Cabinet to overhaul the state’s process for restoring voting rights to people who’ve completed their prison terms.

“Rather than comply with the requirements of the United States Constitution, defendants continue to insist they can do whatever they want with hundreds of thousands of Floridians’ voting rights and absolutely zero standards,” U.S. District Judge Mark E. Walker wrote in an opinion released on Wednesday. “They ask this Court to stay its prior orders.

Florida is among the nation’s toughest states when it comes to restoring the rights of those who’ve completed their prison terms. An estimated 1.5 million Floridians are disenfranchised because of past felony convictions. Ex-offenders who want to vote must wait for up to seven years after being released to apply for restoration of their rights. Applications go to a board that includes the governor and his Cabinet and handles only about 100 requests per year.

The board currently has a backlog of 10,000 applications, Orlando Weekly reports.

Judge Walker has given the governor until April 26 to come up with a better system; Scott has appealed to the 11th Circuit Court of Appeals in Atlanta.

A Victory for Common Sense

Nebraska’s legislature is showing off some midwestern common sense, killing – for the eighth year in a row – a state constitutional amendment that would require state voters to provide a photo ID before casting their ballots.

The Omaha World-Herald reports this morning that supporters of the proposed amendment failed Thursday to marshal the votes needed to end debate and move the amendment forward.

At least 18 states already require or ask voters to produce a photo ID to vote. The laws have become increasingly popular as President Trump and other Republican leaders have argued that they’re needed to protect against voter fraud.

But a series of studies, ordered by Republicans and Democrats alike, have concluded that the kind of voter impersonation that IDs would detect is essentially nonexistent in U.S. elections. Voting rights activists contend that the ID requirements are a not-so-subtle way to depress voter participation among young voters, minorities, the elderly, and disabled – groups that are less likely to have the required identification and which tend to prefer Democratic candidates.

Amid considerable fanfare, Trump last year created a commission to take yet another look at the phantom problem. The panel was disbanded in January after state election officials rebelled against its request that they tap registration records to supply a variety of personal information about registered voters.

WATCH: A Computer Scientist Makes the Case for Paper Ballots