The U.S. Supreme Court heard our case, Moore v. Harper, on December 7. Their decision, expected next June, could change democracy forever, and not for the better. 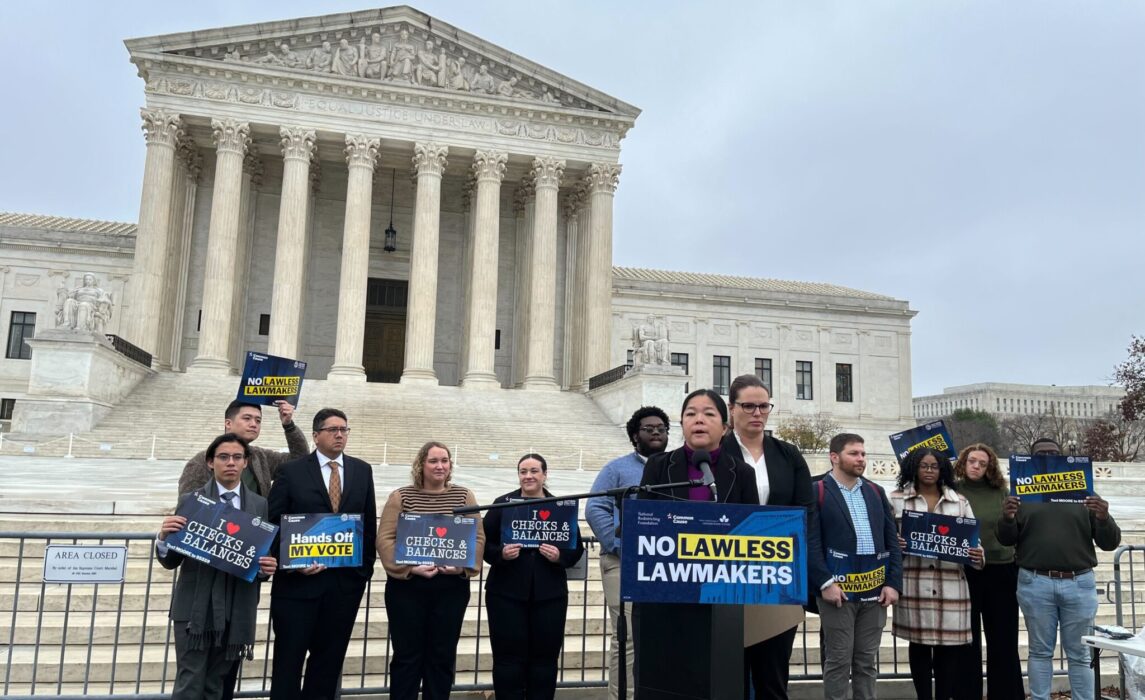 It’s been a week since the U.S. Supreme Court heard our case, Moore v. Harper, one of the most significant legal challenges our democracy has ever faced.

The case stems from a hard-fought victory we and our partners in North Carolina secured from the North Carolina courts after the legislature there tried to push through unfairly gerrymandered voting maps that discriminated against Black voters and expected to give the Republican party a massive advantage in a swing state.

But North Carolina legislative leaders, upset that their attempt to consolidate power was declared unconstitutional by the courts , dusted off a dangerous and un-American legal theory called the “independent state legislature theory’ and asked the Supreme Court unleash state legislatures from the checks and balances that courts and governors provide. The argument proposes that state lawmakers should have unchecked power when it comes to making decisions about federal elections, whether that is how to draw redistricting maps or how people can cast their ballots.

Last weeks’ oral arguments went more than three hours, twice the length of time expected. We will hear in the spring, likely June, what the decision will be, and what it will mean for our democracy.

If five justices buy this outlandish argument, it would create a “blast radius” and “ sow elections chaos, forcing a confusing two-track system with one set of rules for federal elections, and another for state ones,” our attorney Neal Katyal, the former acting U.S. Solicitor General said during oral arguments.

But we aren’t the only ones saying this.

Here’s a round-up of significant editorials and opinion pieces that ran over the last week urging the Court to keep our existing checks and balances in place and follow two centuries of precedent.

OPINION: It’s a relief that at least five justices seem likely to reject the worst version of the GOP’s theory. But a milder ruling could still be damaging. | Editorial https://t.co/fpiRAsuoCC

The combined editorial boards of the Charlotte Observer and the (Raleigh) News & Observer came out swinging in this editorial, pointing out that a “compromise” opinion in this case brokered by one of the swing justices would still be a very bad thing when it comes to our democracy.

The “compromise” could be that courts have no say over gerrymandering, or perhaps that they could only intervene in the very worst instances of gerrymandering.

Considering the danger that a broader interpretation of the legislature’s argument could pose, a compromise might seem like a good thing. It’s not. Redistricting shouldn’t be up to legislatures only, which is pretty much why we have three branches of government in the first place.

“Well, it could be worse” is hardly a comforting refrain, especially when it’s used in reference to the continued viability of our democracy. Yes, it’s a relief that at least five Supreme Court justices seem likely to reject the worst version of a theory that could be truly disastrous for democracy. But even a milder ruling could be plenty damaging in its own way — checks and balances is not something that anyone should want to compromise on.

Op-Ed: The ominous way the Supreme Court could change our elections https://t.co/KNKGbAw8b3

Erwin Cheriminsky is the dean of UC Berkeley’s  Berkey’s Law School and one of the nation’s most preeminent legal scholars. He wrote in the Los Angeles Times after arguments concluded about the reckless, and groundless, legal theory brought before the Court in this case.

Does a state supreme court have the power to find that an act of the state legislature violates the state constitution? The answer to that question should be clear and obvious, but the conservative justices of the Supreme Court expressed doubt about it at oral arguments in Moore vs. Harper on Wednesday. It is not hyperbole to say that the future of American democracy may turn on the court’s answer.

Mockery of our Separation of Powers

Republicans are trying to see if they can turn state legislatures “into omnipotent, unaccountable election bosses with the help of the conservative supermajority on the Supreme Court,” the Times editorial board writes. https://t.co/JzWUPY9AwN

The Supreme Court shouldn’t even have had this case to begin with, given how shoddy a legal argument the “independent state legislature theory” the New York Times editorial board wrote on Friday.

To be clear, this is a political power grab in the guise of a legal theory. Republicans are trying to see if they can turn state legislatures — 30 of which are controlled by Republicans — into omnipotent, unaccountable election bosses with the help of the conservative supermajority on the Supreme Court. The theory has no basis in law, history or precedent. The idea that state lawmakers exist free of any constraints imposed by their constitution and state courts makes a mockery of the separation of powers, which is foundational to the American system of government.

We at Common Cause are continuing to stand up to protect our voting rights and access to the ballot as we await the court’s decision this spring. Keep up with the latest in the case and find out how to get involved at www.mooreharper.com.

Gerrymander Gazette: End of the Year is Near Edition