Democracy In The States: April 2019

Read Common Cause's April 2019 edition of "Democracy In The States" - tracking all the important democracy reform work (and some attacks) at the state and local level. 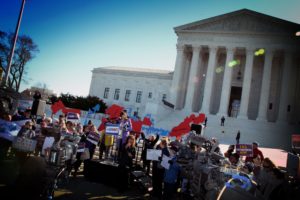 Last month, the U.S. Supreme Court heard oral arguments in a pair of cases challenging the constitutionality of partisan gerrymandering in North Carolina and Maryland. Rucho v. Common Cause challenges North Carolina’s GOP-drawn congressional map while Benisek v. Lamone challenges Maryland’s Democratic-drawn 6th congressional district. Read our top takeaways on why we are hopeful the court will do the right thing and strike down these maps as unconstitutional gerrymanders here.

On the day of the oral arguments, activists from several democracy reform and progressive groups gathered outside the Supreme Court to rally for fair maps and hear from a bipartisan group of elected leaders, including former Governor Arnold Schwarzenegger (R-CA), Sen. Sheldon Whitehouse (D-RI), Gov. Larry Hogan (R-MD), Rep. Alan Lowenthal (D-CA), Rep. Tom Reed (R-NY), Rep. Alma Adams (D-NC), Rep. Andy Harris (R-MD), and Rep. Don Beyer (D-VA), along with representatives from Common Cause, the League of Women Voters, the Southern Coalition for Social Justice, the Arab American Institute, Greenpeace USA, and the Campaign Legal Center. The bipartisan rally underscores the fact that all voters are hurt by partisan gerrymandering and it is a problem that both parties deal with. 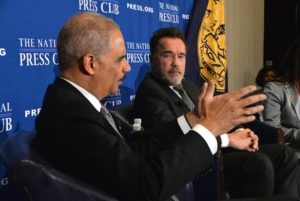 After the Supreme Court heard oral arguments in the cases, former U.S. Attorney General Eric Holder and Schwarzenegger sat down to talk about the fight to end gerrymandering at the National Press Club. Watch the event here.

States consider redistricting changes ahead of 2021

Already in the 2019 sessions, Common Cause has helped pass the National Popular Vote (NPV) compact in three states: Colorado, New Mexico, and Delaware. All three bills have now been signed into law, meaning we are just 81 electoral votes away from enacting the compact and electing the next president by the national popular vote. NPV has also passed in the Oregon Senate and Nevada Assembly this year, and is expected to move in the other chambers in those states. Other active NPV campaigns continue in Maine and New Hampshire. Read more about the National Popular Vote compact. 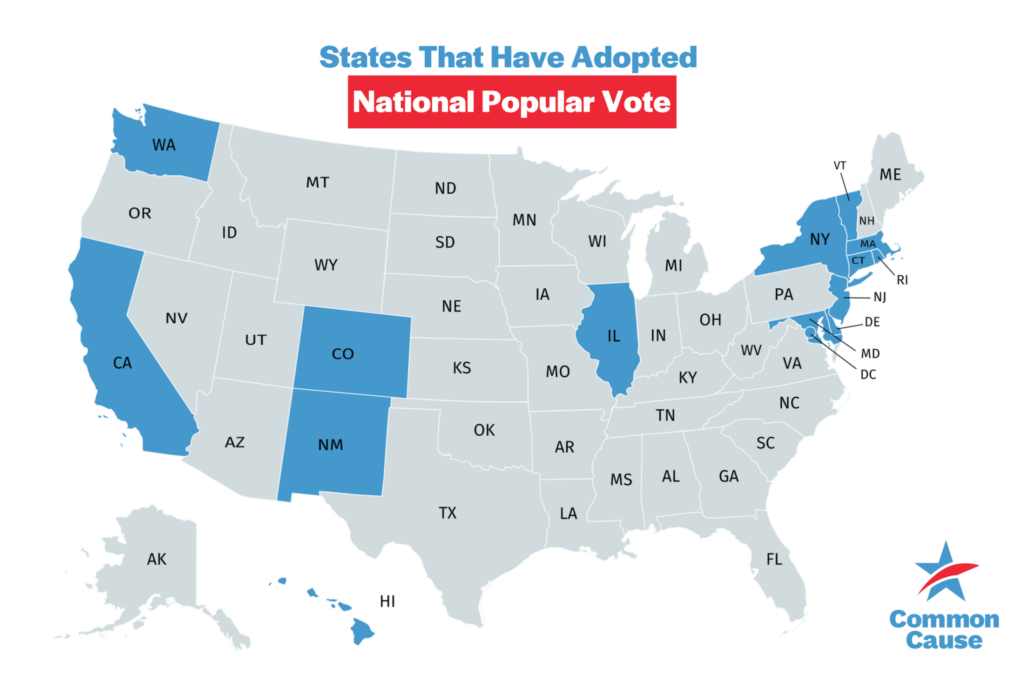 States across the country are moving commonsense election reforms aimed at expanding and protecting voting rights, including in:

But it hasn’t been all good news. In Texas, Republican legislators are advancing a billthat puts new unnecessary and harmful burdens on voters. In Florida, the legislature is moving a proposal that will weaken the implementation of a voter-approved ballot measure that returns the right to vote to people with felony convictions. In Iowa, Republican legislators blocked a constitutional amendment proposed by GOP Gov. Kim Reynolds to automatically restore felon voting rights. In Tennessee, the legislature is considering a bill that would chill grassroots voter registration drives. In Arizona, a bill to permanently purge some voters from the early voting list has passed the Senate and is pending in the House.

Karen Hobert Flynn, president of Common Cause, and Chris Melody Fields Figueredo, executive director of the Ballot Initiative Strategy Center, recently laid out the numerous attacks on the citizen initiative process in states across the country, including in Ohio, Florida, Missouri, North Dakota, Idaho, and Michigan. Read the new op-ed in USA Today here.

In Case You Missed It

States are already proving For the People Act reforms can work