Originally appearing on Democracy Labs, this article is reproduced here with our gratitude to its author, Deepak Puri. 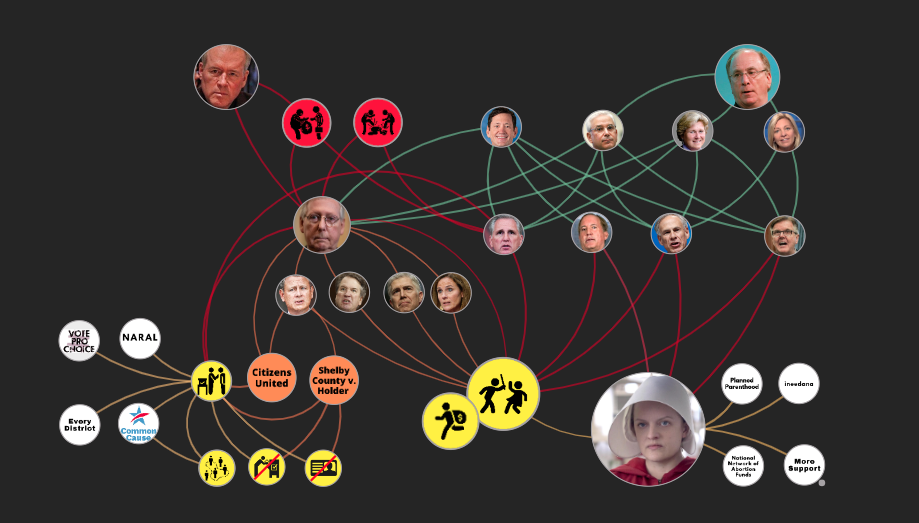 Editor’s Note: This article originally appeared on Democracy Labs and is reproduced here with our thanks.

Who are the CEOs funding the Republicans stacking the courts? Denying women control over their own bodies? Encouraging vigilantism?

Follow the money to see how corporate CEOs are funding Republicans denying women control over their own bodies.

This network map has four sections and you can click on any part for details to trace how political donations and judicial activism bring us vigilantism against women and what you can do about it.

Justice Roberts passed Citizen’s United that allows corporations to donate millions to campaigns and overwhelming small individual donations. He also gutted the Voting Rights Act which protected the rights of all Americans to vote fairly.

Mitch McConnell and the Republicans use these donations to suppress voters and stack the courts. Track the donations by clicking on the line connecting donor and politician.

On September 1, nearly all abortions became illegal in Texas. A state law signed by Gov. Greg Abbott bans abortions as soon as a fetal heartbeat can be detected. That’s as early as six weeks gestation before many people know they are pregnant, making the bill a near-total ban on the procedure.

The Republican bill has a BOUNTY that rewards people who block a Texan from getting an abortion. Anyone, anywhere in the United States, can sue anyone who helps a patient in Texas access abortion after six weeks of pregnancy.

A ‘bounty’? Are cowboys getting rewarded for stopping abortions?! Texas officials wrote the law to encourage vigilantes — legally. An unprecedented provision within the abortion ban emboldens ordinary citizens to enforce it. In fact, the abortion ban offers a cash incentive to people who file lawsuits against someone they think is breaking the law.

The law awards at least $10,000 for every lawsuit that successfully blocks a pregnant person from getting an abortion in Texas. And there are no limits on the number of lawsuits, so there could be a rush of suits from organized anti-abortion activists. If the barista at Starbucks overhears you talking about your abortion, and it was performed after six weeks, that barista is authorized to sue the clinic where you obtained the abortion and to sue any other person who helped you, like the Uber driver who took you there. — Melissa Murray, New York University law professor, via New York Times” – Miriam Berg, Planned Parenthood

As Martin Luther King Jr. said, “God sent us by here, to say to you that you’re not treating his children right. And we’ve come by here to ask you to make the first item on your agenda fair treatment, where God’s children are concerned. Now, if you are not prepared to do that, we do have an agenda that we must follow. And our agenda calls for withdrawing economic support from you.“

If you’re not pleased with the corporations funding vigilantism against women, should you spend your money with them?

Take Away Connect the dots and make it easier for people to see the connection between political donations, stacking the courts and the importance of voting.

This relationship map can be freely shared with this link https://Dem-Labs.kumu.io/texan-handmaids-tale or embedded in a website with this code:

Deepak Puri is a Silicon Valley veteran, an engineer with three software patents with fifteen years experience at Netscape, Oracle and VMware. He co-founded Democracy Labs, a non-profit after the 2016 presidential election to find and introduce innovative new apps to progressive causes and campaigns so they can do more with less money. DemLabs pro bono evangelizes the use of free/low-cost apps through blogs, online courses, and in-person workshops.

Covid-19 Has Shown How Little Mississippi Does for Children