Today, California Common Cause joined several other groups, like our friends at League of Women Voters, to serve notice on the DMV to shape up, or we’re suing. 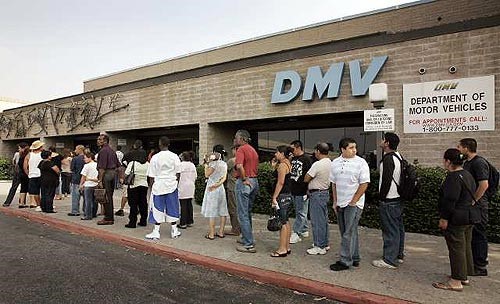 But it turns out that it’s been doing a lousy job of processing the voter registration forms that people turn in when they are also in line to register their vehicles.

The Department of Motor Vehicles is supposed to, by law, create a seamless way for people who want to register to vote or update their voter information, to give the DMV their information and get those names into the voter registration database. (The law is the National Voter Registration Act, more commonly known as the “Motor Voter Act”).

This last election cycle, we got lots of phone calls from people who tried to vote, but found that they were not on the roster at the poll site.  For a lot of them, it turned out they had gone to the DMV to handle car-related business, and tried to register to vote.  Somewhere along the way, the voter registration information received by the DMV did not make it to election officials.

Today, California Common Cause joined several other groups, like our friends at League of Women Voters, to serve notice on the DMV to shape up, or we’re suing.

Here’s just one person’s story: “Until last year, Shelly Zelda Small, who is 62 and is one of the individual Californians named in the letter, had voted in every election since she was 19 years old.  In August 2014, Ms. Small went to the DMV to report that she moved from Encino to West Hollywood, and she asked for her voter registration address to be updated along with her license.  When she arrived at her local polling place in November, she was told she was not on the rolls and was turned away, unable to vote for the first time in her adult life.”

Every election, we hear stories like Shelly Small’s. In fact, Common Cause’s own Dan Vicuna tried to register through the DMV, and got the brick wall as well.

In the letter, the voting rights groups advised that they are ready to work with California officials to modify the State’s procedures to afford the voter registration opportunities required by federal law. If the State fails to respond or take steps to comply with the law within 90 days of receiving the letter, the groups and the individual citizens have said they will bring a lawsuit to make sure the State fulfills its obligations.

For more info on the what the notice letter says, all the great groups that are involved, and what the next steps are, click here.