It's been five years since the Citizens United ruling, and we've been working hard since then to get money out of politics and protect the judiciary from the real threat of politicization. Just last week, the Koch brothers and announced that their network of secretive donors plans to invest nearly $900 million in next year's campaigns. That's more than what either national political party has ever spent on an election cycle, and it exceeds George W. Bush and John Kerry combined spending in their 2004 presidential race.

Justice Ginsburg speaks out against money in politics

It’s been five years since the Citizens United ruling, and we’ve been working hard since then to get money out of politics and protect the judiciary from the real threat of politicization. Just last week, the Koch brothers announced that their network of secretive donors plans to invest nearly $900 million in next year’s campaigns, a staggering sum greater than what the national Democratic or Republican Party organizations have ever spent on a campaign, and that exceeds what George W. Bush and John Kerry spent combined in their 2004 presidential race.

That’s why when Georgetown Law students asked Justice Ruth Bader Ginsburg what Supreme Court case she’d reverse if given the chance, she picked Citizens United. She went on to share her reflections and optimism that the pendulum is sure to swing the other way, but not without hard work.

Watch the video on C-SPAN’s site: 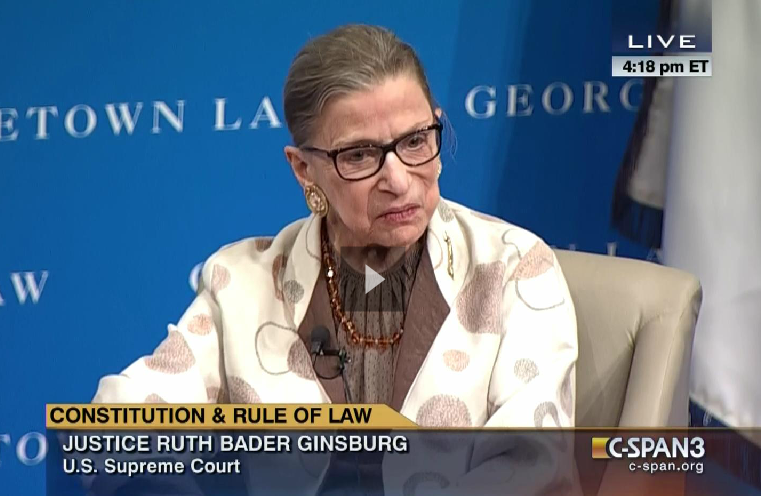 If you agree with Justice Ginsburg that we need to overturn Citizens United, add your name today!

TRANSCRIPT:
Question from Audience: “If you could pick one decision over the past 10 years that you could wave a magic wand and overturn, what would it be, and why?”
Justice Ginsburg: “I would have to say Citizens United, because I think that our system is being polluted by money. It gets pretty bad when it affects the judiciary too. In some 39 states, judges are elected at some level, and when it costs millions of dollars to fund a campaign for a state supreme court, something is terribly wrong. I think we are reaching the saturation point. A great man that I loved dearly, Marty [her late husband], often said that the true symbol of the United States is not the bald eagle – it is the pendulum. When it swings too far one way, it’s going to go back in the other direction.”
Moderator: So you think it’ll swing back?
Justice Ginsburg: I can’t say when, but that one day, sensible restrictions on campaign financing will be the law of this land. Yes, it will happen. It’s one of the hard things to explain when I go abroad. I’m very proud of being a citizen of the U.S.A., but then I’m asked questions, like, ‘How do you allow people with money to have access to the lawmakers – to the decision-makers – that ordinary people don’t have? How do you have a system where legislative districts in the House are so gerrymandered that people don’t vote?’ One of the really shameful things is the low rate of voting in the United States. In many democracies, the turnout is much higher. The people have a sense – ‘Why bother?’ It’s a foregone conclusion who is going to win.’ So, I think we need to get our democracy – a democracy for all of the people. There is important work to be done.”