The first night at ALEC’s conference I was quietly sitting at the hotel bar. One legislator handed a whisky to another legislator and I heard him say “don’t thank me, thank Pfizer.” When I asked the legislator if Pfizer just paid for his drink, he denied it.

The first night at ALEC’s conference I was quietly sitting at the hotel bar. One legislator handed a whisky to another legislator and I heard him say “don’t thank me, thank Pfizer.” When I asked the legislator if Pfizer just paid for his drink, he denied it.

This is what happens at conferences of the American Legislative Exchange Council, or ALEC, a secretive corporate lobbying group. This year ALEC held its annual meeting at the luxurious Manchester Grand Hyatt in San Diego. The resort hotel, which calls itself “the largest urban waterfront resort on the West Coast”, has two rooftop pools, a luxury spa, and large decks over looking yachts in the San Diego bay. This week it is also filled with elected politicians, corporate and special interest lobbyists, and dozens of security guards to make sure the lobbyists and politicians can meet and mingle in secret. What’s worse is most of the legislators’ travel and stay at this conference will either secretly be paid by ALEC’s corporate sponsors or by taxpayers.

Like other ALEC meetings, this San Diego event was met with protests, but the demonstration that happened on Wednesday is not stopping ALEC and its corporate members from continuing its lobbying activities. A list of conference sponsors obtained by the Center for Media and Democracy and Greenpeace gives an insight on which corporations are sponsoring this year’s event: Reynolds American, AT&T, Altria, ExxonMobil, Chevron, Duke Energy, Pfizer, Time Warner Cable, and FedEx, to name a few. Because ALEC is a 501(c)(3) charitable nonprofit, these corporations are eligible for a tax write-off for every dollar they are giving to ALEC for its conference. 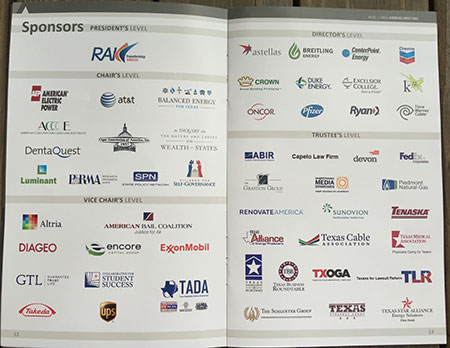 [Photo Credit: The Center for Media and Democracy and Greenpeace]

Despite the corporate sponsorship at ALEC’s meeting this year, the organization has lost a number of high profile corporate members over the last year, including Microsoft, Google, Facebook, eBay, BP, and T-Mobile. In March, Common Cause joined over 80 public interest, religious, environmental, labor, public health, civil rights, and investor organizations in sending a letter to Pfizer urging the company leave ALEC, largely due to ALEC’s controversial positions on climate change and healthcare. Since then, over 100,000 people have signed petitions urging Pfizer to cut ties with ALEC.

But it appears that Pfizer is not listening, as the company continued to sponsor this week’s ALEC conference in San Diego at the “Director Level,” amounting to $10,000. Despite Pfizer’s proactive public statements on climate change, public health, and tobacco, this sponsorship puts the company in bed with Big Tobacco companies, such as Reynolds American and Altria, and Big Oil and polluter corporations like ExxonMobil, Chevron, and Duke Energy.

Its time for Pfizer to stay true to what it’s telling consumers and investors when its comes to climate and public health, and cut ties with ALEC’s pay-to-play, tax-break-for-lobbying scheme.

Forget Big Donors, 2016 Is Going To Be the Election of Mega-Donors