We've been busy preparing for the American Legislative Exchange Council's meeting in Denver this July. Join us as we resist ALEC in Colorado.

This week, the American Legislative Exchange Council (ALEC) is holding their annual meeting in downtown Denver. In response, Colorado Common Cause formed a coalition to resist the organization’s presence in our state–and highlight the damage that ALEC has done in state legislatures throughout the country.

Ahead of the meeting, we released a new report exposing ALEC’s influence in the Colorado legislature. The report revealed 22 Colorado legislators with ties to ALEC, as well as several recent Colorado state bills with ALEC fingerprints. The report also examines funding ALEC has received from the Coors family and Koch brothers, and how the organization abuses its public charity status with the IRS–effectively making their corporate donors eligible for tax deductions. 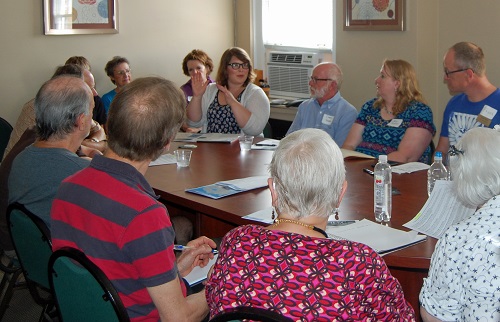 On Saturday July 15th, we hosted an educational “teach-in” about ALEC in downtown Denver (which was live streamed on our Facebook page). Our Executive Director Elena Nunez moderated a panel of experts who spoke about how ALEC negatively impacts a variety of issues: public education, workers’ rights, campaign finance reform, net neutrality, women’s access to healthcare, tax reform, environmental conservation, voting rights, and communities of color. Attendees then participated in two break-out sessions, where they could take a deeper dive into one of these issues and learn how to fight back against ALEC.

An estimated 165 individuals attended the ALEC Teach-In – check our Facebook page for pictures and a video of the event.

So far this week, several ALEC protests and rallies have taken place–the largest of which focused on Betsy DeVos, one of ALEC’s featured speakers. The protests received press coverage from NPR, the Denver Post, and the Colorado Independent. 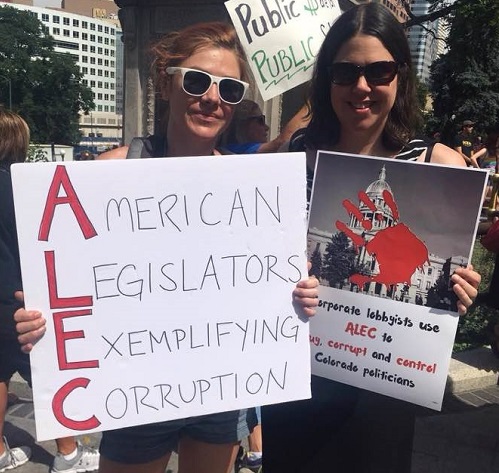 There is still work to do after ALEC goes home. Here are a few actions you can take to fight back against ALEC here in Colorado:

We look forward to working with you to make Colorado an ALEC-free state. Onward!