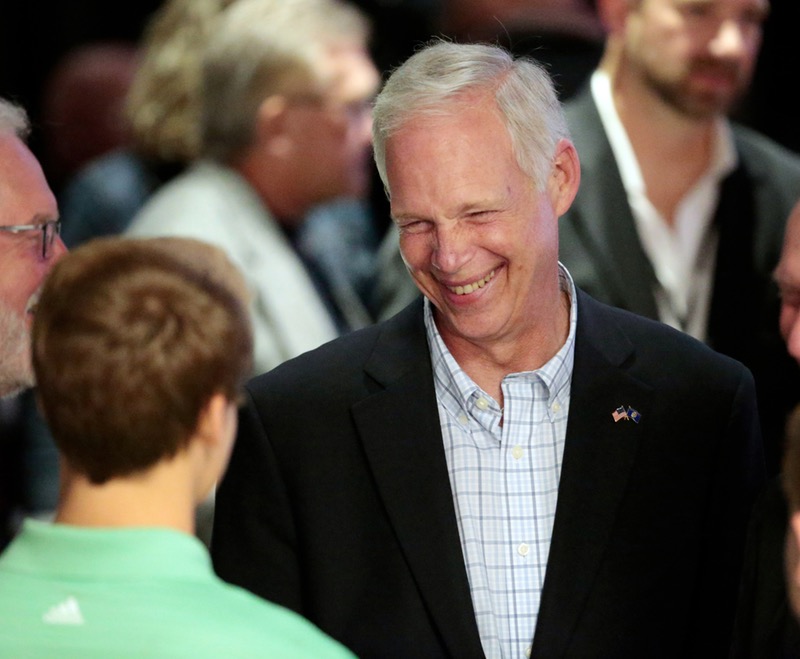 Born and raised in Mankato and educated at the University of Minnesota, Ron Johnson grew up to be a United States senator from Wisconsin.

His constituents would naturally like some face time with the Republican, who once claimed it’s “lunacy” to blame humans for climate change, and wants to militarize immigration by building “forward operation bases” along the Mexican border.

The lawmaker and the people obviously have much to talk about.

Wisconsin residents have called and emailed their senator, asking him to hold a town hall meeting. Or better yet, meetings.

They got nothing. So residents organized the meetings themselves, telling Johnson where and when he needs to show up.

About 500 people filled First Congregational Church in Madison in late February. They saved a chair for Johnson, front and center. He was a no-show.

The same went for other town halls in Wausau, Green Bay, and Milwaukee.

But Johnson isn’t just ignoring residents. He’s now threatening them, sending letters telling some constituents that they “are not to call or visit any of Senator Johnson’s staff or any of his offices at any time.”

“If you fail to comply with this notice,” it further reads, “then we will have no other alternative but to contact the United States Capitol Police and report your noncompliance.”

The threats don’t seem to be diminishing Wisconsin’s thirst for discourse.

“I haven’t seen people this motivated, this eager to be active in the affairs of Wisconsin, since 2011 when 100,000 people were in Madison almost every day, protesting [Gov. Scott] Walker destroying the collective bargaining agreements with public employees,” says Jay Heck of Common Cause Wisconsin, a nonpartisan nonprofit citizen’s group that advocates for responsive and accountable government. “This has just totally ignited activism all around the state. People on the ground are organizing. Johnson represents how broken our system is.”

But Johnson may not have much motivation to do his job. He’s already said he won’t seek reelection in six years. Hence, Heck is convinced the current blitzkrieg of bad PR won’t compel him to break bread with the little people.

“Meeting with [his] constituents [is his] job,” says Heck. “If someone isn’t doing that, we should call them cowards. If you’re not willing to come before the people you represent in the United States Senate… and meet with them and go face-to-face with them, and talk to them about what their concerns are, what else are they but cowards?”

Repeated attempts to contact Johnson’s Washington, D.C. office were unsuccessful. All calls were answered by a recorded message, in which Johnson promises that concerns will be promptly addressed by his staff.

Yet this would not be happening either. Johnson’s voice mailbox was full.

Days of "Action" on Fair Voter Maps and Ending Partisan Gerrymandering in Wisconsin!