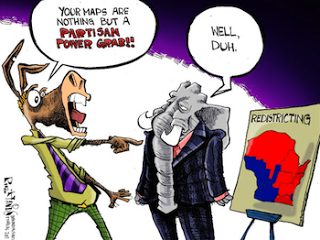 Last month, State Senate Majority Leader Scott Fitzgerald (R-Juneau) and Assembly Speaker Robin Vos (R-Rochester), authorized – without public input, or even a vote in the Legislature – the expenditure of hundreds of thousands of dollars of taxpayer funds to defend the 2011 state legislative district maps drawn in secret. Those maps were struck down by a federal court three-judge panel in November and in January, the same court ordered that the current maps must be redrawn, according to criteria stipulated by the court, before November 1, 2017.

To date, Fitzgerald and Vos have not begun taking action (that the public has been informed about) to comply with that court order. There have been no announcements about when the redrawing of the state legislative district lines will begin, what process will be utilized to do so, when public hearings will be held, and if the public will be “allowed” to play a role in the process.

The GOP leaders have also not revealed how they are spending taxpayer dollars and to whom those funds are being paid, in the defense of the unconstitutional, rigged 2011 voter maps.

Also late last month, Wisconsin Attorney General Brad Schimel formally appealed the November federal court decision to the Supreme Court of the United States (SCOTUS). Schimel, and his cohort of state Justice Department lawyers, are paid with taxpayer dollars – so the lawyers Fitzgerald and Vos have hired amount to a double hit on the wallets of Wisconsin taxpayers to defend unconstitutional, hyper-partisan voter maps.

At the very least they owe us a public accounting of how our money is being spent. But thus far? Nothing. No timetable for redrawing the voter maps and no disclosure of how taxpayer dollars are being (or will be) spent.

In the meantime, citizens have been very active contacting state legislators in support of redistricting reform legislation (Senate Bill 13/Assembly Bill 44) and in demanding that taxpayer dollars not be utilized to defend the 2011 maps. Further, in just the last several weeks, more than 700 new Wisconsinites have signed our online petition in support of redistricting reform, boosting our total to over 3,400! Our goal is lofty, but doable – 5,000. If you haven’t signed it yet, please do so. If you have, urge others to do so.

Citizens ask us all the time what they can do to advance the adoption of fair voter maps and end partisan gerrymandering in Wisconsin. The answer is that there is plenty that citizens can do. Start with these five things. Then, educate others about the need for redistricting reform and write letters to newspapers like this excellent one from a Wausau resident. Further educate yourself on this issue. Read this excellent, recent op-ed written by CC/WI State Governing Board member Tom Frazier on this issue and consider writing one yourself.

Even if you have contacted your own State Senator and State Representative already, do so again! They need to be reminded. Continually. And if you haven’t contacted Fitzgerald and Vos about scheduling a public hearing for Senate Bill 13 and Assembly Bill 44 (they have the power to order public hearings, or to block one from being scheduled), or to tell them you resent and oppose the use of your tax dollars to defend the unconstitutional, rigged legislative district maps that they hold so dear, contact them now! Here’s how to reach those two:

We must keep the pressure on. And we must – and will – never give up. On Wisconsin!

Citizens Need to Keep Pressure on as Gerrymandered Legislative District Maps Lawsuit to be Considered by U.S. Supreme Court

Days of "Action" on Fair Voter Maps and Ending Partisan Gerrymandering in Wisconsin!