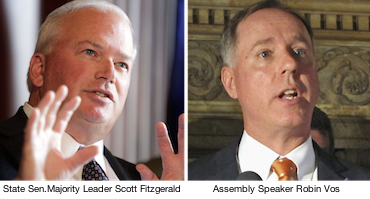 Note: This opinion editorial was written for and published in the Wisconsin State Journal on February 23, 2020.

Wisconsin Assembly Speaker Robin Vos and State Senate Majority Leader Scott Fitzgerald have long opposed any and all attempts to bring even an iota of fairness and impartiality to the redistricting process of state legislative and congressional districts in Wisconsin. Indeed, their fear of a fair system that would provide Wisconsin voters with legitimate competitive elections and genuine choices at election time is such that they have quashed any and all efforts to allow even a public hearing on the issue in the Wisconsin Legislature since 2013.

The very dirty, not-so secret truth is that both Vos and Fitzgerald have long depended on their absolute control of the redistricting process to enable each to enforce their iron-clad demand for allegiance and absolute obedience to their political and policy objectives and quash any dissent or independent thinking among rank and file legislators in their respective partisan caucuses.

That these legislative leaders fear and loathe a fair, nonpartisan redistricting process is understandable given their perceived need to exercise autocratic control of their legislative chambers. But for each of them to continually lie about the legality of gerrymandering reform is beyond outrageous and pathetic in the extreme.

Both leaders continually say that the widely supported “Iowa model” redistricting reform legislation that has been introduced, with bipartisan support, in each of the last four legislative sessions, is “unconstitutional.” But according to the Wisconsin Legislative Council and virtually every constitutional expert – such as University of Wisconsin-Madison political science Professor David Canon to name just one – the measure is fully compliant with Wisconsin’s Constitution. If Vos and Fitzgerald can prove their claim that the Iowa model legislation in unconstitutional, they should cite their legal sources. They never have.

Similarly, these long time overly partisan politicians and their underlings have said that Governor Tony Ever’s recent executive order to establish a nonpartisan commission to draw state legislative and congressional districts following the 2020 decennial census is also unconstitutional. It most certainly is not. Continually stating that it is illegal does not make it so.

The Wisconsin Constitution gives the Wisconsin Legislature the power to decide (approve) the redrawn state legislative and congressional district maps every ten years but it is silent on who must actually draw the maps. Indeed, under the current partisan process, Vos and Fitzgerald delegate the actual drawing of the maps to partisan experts (lawyers and legislative aides) whom they select to do their bidding. Then, both chambers of the Legislature are to pass the maps that Vos and Fitzgerald have masterminded for their own, maximum political self-interest.

The result is that only 10 percent of the state legislative districts and none of Wisconsin’s eight congressional districts offer real choices to voters in the general election. The election results are preordained and rigged, with the outcome of those elections a foregone conclusion.

Under the Iowa model legislation and the Governor’s nonpartisan commission proposal, the actual drawing of the voting maps is taken out of the hands of the partisan legislative leaders and their designated minions and instead, the new districts are drawn according to very strict nonpartisan criteria. This criteria includes keeping cities and towns and counties together to the extent possible. Currently 48 of Wisconsin’s 72 counties are split among legislative districts for strictly partisan purposes and to keep Vos and Fitzgerald in control of the Legislature.

Under the Iowa model legislation and the Governor’s proposal, the Legislature must vote up or down, without amendment, on the voting maps drawn according to the objectively nonpartisan and fair criteria. And unlike the hyper partisan voting maps masterminded by Vos and Fitzgerald, there would be transparency and the ability to inspect and comment on the maps drawn by nonpartisan criteria. There would be no “secrecy oaths” like the ones the Republican legislative leaders forced Republican legislators to sign in 2011 to not disclose to the public the contents of their new, rigged districts.

Significantly, unlike the $4 million in taxpayer money that Vos and Fitzgerald have expended since 2011 to draw and protect their utterly uncompetitive, secret voting maps, the nonpartisan process would be of negligible cost to taxpayers. Instead, voters would have actual, genuine choices at election time where the results were not all predetermined.

Robin Vos and Scott Fitzgerald have held the voters of Wisconsin captive to their own narrow, selfish, partisan political interests for far too long. And they have continually misrepresented the truth about the legality and constitutionality of the strongly supported and nonpartisan antidote to partisan gerrymandering in Wisconsin.

This is the year that Wisconsin citizens should finally rise up and insist upon having legislative leaders and a state legislature that is responsive and worthy of their trust and support. On April 7th voters in nine Wisconsin Counties (Marquette, Milwaukee, Monroe, Pierce, Portage, Rock, St. Croix, Trempaleau, and Wood) will have the opportunity to vote for fair voting maps with a referendum question on their ballots. So too will voters in 14 municipalities in Oneida and Vilas Counties. Send Vos and Fitzgerald a message that voters should pick their elected representatives, rather than the politicians picking which voters they get to represent.