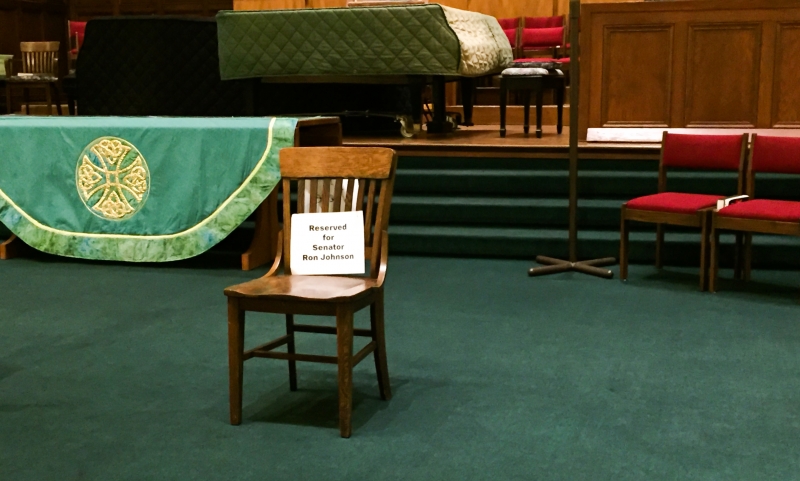 Roughly 500 constituents gathered at what was termed an “empty chair town hall” for Sen. Ron Johnson, R-Wis., at the First Congregational Church in Madison Wednesday night.

Lawmakers across the country have faced increasingly antagonistic town halls, and many have stopped holding open meetings as a result. In response to this, activists have begun holding town halls “in absentia” to highlight the perceived lack of communication with constituents.

The town hall was organized on behalf of Johnson since he had not scheduled one himself during the congressional recess. Johnson was invited to the event but did not attend.

Although he didn’t show up, almost 500 people came out to voice their concerns on federal policy.

Stephanie Kurtz, one of the organizers of the town hall, opened the event with critical remarks about Johnson’s lack of availability for constituent outreach.

“How can he be our voice in Washington when he’s not here listening to the voices of the state he represents?” Kurtz asked the audience.

The first 45 minutes of the meeting was devoted to questions that were recorded with the intent to send them to Johnson for a response. This was followed by addresses from speakers on topics such as immigration and gerrymandering.

Daniel Zinn, a UW-Madison student and head of the campus chapter of Amnesty International, a major human rights organization, asked Johnson to oppose President Donald Trump’s immigration ban executive order and all legislation to that effect.

“We want Senator Johnson to pledge his support for the resettlement of Syrian refugees in the United States [and] denounce President Trump and his administration when they make Islamophobic remarks,” Zinn said.

Most of the questions dealt with health care, climate change and immigration. Among attendees who asked questions, many claimed to have previously reached out to Johnson about these issues before and said they received no response.

Jay Heck, executive director of Common Cause Wisconsin, a citizen’s lobby concerned with election reform and transparency in government, spoke about partisan gerrymandering in Wisconsin and the current federal court case against it.

“[State legislators] know that they can defy you, not listen to you, not attend a town hall meeting and be perfectly assured that because of the way the maps are drawn that they will be re-elected. And that is fundamentally undemocratic,” Heck said.

The event was organized by Stephanie Kurtz and Ann Jamison, with help from Indivisible Madison. The group is part of a larger national movement to use the tactics of the Tea Party—such as focusing on local elections and not compromising on core principles—to build resistance against the Trump administration.

Originally published on Feb. 22, 2017 in The Daily Cardinal.

Op-Ed: Stakes are huge as court orders end to gerrymandering