Hagedorn says he will be impartial when he is sworn in as a justice later this Summer. But in the absence of stronger recusal rules for Wisconsin judges, will he really be impartial, objective, and beholden only to the law and not his supporters?

Wisconsin Court of Appeals Judge Brian Hagedorn very narrowly won the State Supreme Court election on April 2nd to replace retiring former Chief Justice Shirley Abrahamson. He benefited from the active organizational and financial support of the Republican Party of Wisconsin (RPW) and other partisan organizations, particularly in the last several weeks prior to the election. 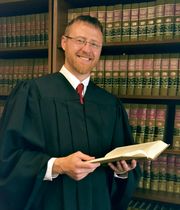 In what may be an action unprecedented in state political history, Hagedorn addressed the RPW state convention in Oshkosh last week, specifically to thank Republican activists for strongly supporting his candidacy. “When I got punched, you were the ones who punched back,” Hagedorn said to the party faithful. “When I got knocked down, you grabbed the baton and kept running with it.”

Hagedorn says he will be impartial when he is sworn in as a justice later this Summer. But in the absence of stronger recusal rules for Wisconsin judges, will he really be impartial, objective, and beholden only to the law and not his supporters?

Wisconsin currently has the 47th weakest recusal rules in the nation when it comes to judges having to recuse themselves if they are the recipients of significant campaign contributions or the beneficiaries of so-called “independent” election spending. Essentially, judges decide for themselves whether to recuse themselves from a case in which a party before the court has been a campaign contributor above a certain threshold.

This very weak rule was written by two independent special interest groups – Wisconsin Manufacturers & Commerce and the Wisconsin Realtors Association and adopted verbatim by conservatives on the Wisconsin Supreme Court in 2010.

Proposals to strengthen recusal rules since that time have been rejected, most recently in 2017 when conservatives rejected a petition submitted by 54 retired jurists for strong recusal rules and refused to hold even a public hearing on the matter.

During the campaign for the Wisconsin Supreme Court earlier this year, Hagedorn indicated he was not supportive of stronger recusal rules while his opponent, Wisconsin Court of Appeals Chief Judge Lisa Neubauer said she thought stronger rules ought to be considered, and supported holding a public hearing to receive input on the issue.

Now that Judge Hagedorn has expressed his deep gratitude to partisans for their help in his election, how can the public be confident that he will be strictly impartial in his application of the law? What assurance would a Democratic or progressive individual or entity appearing before the Wisconsin Supreme Court have that Hagedorn would be fair and non-partisan in his decision-making process?

That’s why strong recusal rules are so important and needed in Wisconsin.

Public confidence in the impartiality and fairness of our state courts had fallen dramatically over the last decade. Adoption of stronger recusal rules by the Wisconsin Supreme Court would help restore that necessary confidence. Judge Hagedorn could initiate that process and raise public confidence in his own upcoming first term on the court by joining the call for stronger rules.