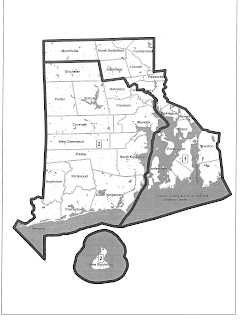 Recently I had a chance to try my hand at redistricting Rhode Island. I made an appointment with Election Data Services and was invited to room B-5 to take a crack at drawing some lines using the same software being used by the official Reapportionment Commission. To make things easy I first tried my hand at creating two congressional districts. Because of shifts in the population in Rhode Island, a little over 7,000 people need to be moved from CD2 to CD1. Dividing a pie in half would be easy, right? Wrong.

Recently Rhode Island’s members of Congress sent a joint letter to our commission requesting that, much as it does now, all communities be kept intact with the exception of Providence. My first map (diagram to your right) tried this. Although it’s hard to tell, I moved the line between CD1 and CD2 within the City of Providence, but kept historic neighborhood boundaries in place. This map got me within a 100 person difference, or 0.01 percent, between the two districts. Courts have consistently said that congressional districts must be within 1% of each other so as not to violate the principle of one person, one vote.

Is that the only way to divide the pie in half? Certainly not. My second attempt started with the idea that Burrillville should be moved from CD1 to CD2. Why? well mistakenly I thought Burrillville was not considered part of the Blackstone Valley, and had more in common with Gloucester and Foster than Smithfield and Pawtucket. Of course I later discovered that both Burrillville and Glocester are considered part of the Blackstone Valley. 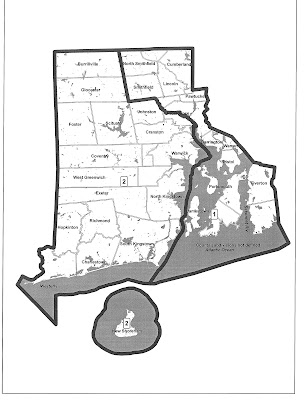 Nonetheless, operating under my false assumption, I moved Burrillville over to CD2 and took more of Providence for CD1. The result was a districts that is a more visually appealing split of the state. And again, I was able to keep the population difference between the two districts within several hundred, thus satisfying the 1% standard, and able to keep Providence neighborhoods intact. Of course visual appearance is just one of many, many criteria that can be applied to the creation of legislative districts.

The simple exercise of dividing Rhode Island into two equal parts illustrates the difficulty of this process, and the need for contextual information. Creating 75 House districts and 38 Senate districts is more difficult by an order of magnitude than this simple illustration. Factor in matters of race, ethnicity, partisan competition, geographical compactness and contiguity, and the process gets more and more difficult.

Common Cause urges the public to get involved in the process by submitting your own maps. You can do as I did and use the official software to draw some lines, or take a first shot at it by using a free online tool called Dave’s Redistricting Software. The official software allows you to draw districts using the exact data used by the commission, down to the very small Census block tract. Dave’s Redistricting Software uses the Census block group data which is an aggregation of Census block tracts. Nonetheless it is a great way to start without having to leave your house.

If you have any questions or concerns, please give us a call at Common Cause Rhode Island at 401-861-2322, or drop us a note at contact@commoncauseri.org and we’ll be happy to help you. Happy redistricting!