Constitutional Chaos The Shadow Campaigns Aiming to Unravel Our Freedom 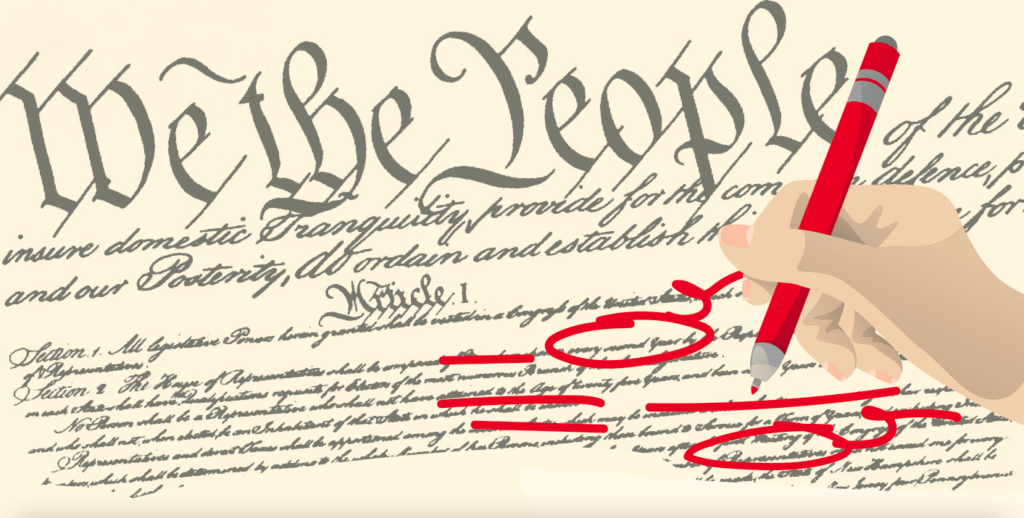 This report is an update to the 2016 Common Cause report The Dangerous Path: Big Money’s Plan to Shred the Constitution, examining the dangerous efforts by secretive, well-funded special interest groups to push state legislatures around the nation to call for a constitutional convention through a little-known provision in Article V of the U.S. Constitution.

The effort to convene a constitutional convention is backed by wealthy special interests, organizations, and individuals that span the ideological spectrum. This includes right-of- center supporters of new limits on federal power, such as a balanced budget constitutional amendment, as well as backers on the left who support a constitutional amendment to overturn the Supreme Court’s decision in Citizens United v. Federal Election Commission (FEC), a ruling that reversed decades of well-settled law limiting corporate political spending.

A federal constitutional convention was last held in 1787 when the Constitution itself was drafted. Since then, the U.S. Constitution has been amended 27 times through the first of two processes described in Article V: Congress by two-thirds majorities of both the House and Senate passes the amendment, which must then be approved (i.e., ratified) by three fourths of the state legislatures. The second, never used path to amend the Constitution laid out in Article V is for two-thirds of the state legislatures (34) to pass resolutions applying for a new constitutional convention to propose amendments and then send those amendments to the states for ratification (i.e., an Article V convention).

Simply put, there are no guardrails in place to ensure an orderly course for an Article V convention. Any Article V convention, regardless of the stated purpose going in, runs the risk of becoming a runaway convention. There is no saying what could happen to any of our rights or what could be traded in an exchange between special interests—who will most definitely have their hands in the process. There is no predicting what could happen and far too many open-ended questions for this to be a good idea.

For all these reasons, Common Cause co-leads the national Defend Our Constitution co- alition, which seeks to stop an Article V convention from being called in order to protect all Americans’ constitutional rights and civil liberties that would be threatened by such a convention. Holding such a convention runs the very high risk of being taken over by highly polarized politicians and wealthy special interests seeking to cripple federal powers and roll back our rights. At a time when disinformation is running rampant and deliberately being disseminated through various channels, a constitutional convention could be absolutely devastating to our rights and liberties.

This report aims to examine the pro-convention campaigns and who is behind them, and to shed light on the immense dangers of what would happen should these efforts succeed. It will also make the case that a convention could easily exceed any narrow mandate—e.g., a balanced budget amendment (BBA)—and instead undertake a wholesale and highly divisive rewrite of our nation’s charter.

Constitutional Chaos The Shadow Campaigns Aiming to Unravel Our Freedom