IN MEMORY: Kappy Eaton, A Great Champion for Democracy

Common Cause Oregon Board & Staff, May 2018, with Kappy Eaton third from left

It is with much sadness that we note the passing of long-time Common Cause Oregon board member Kappy Eaton, who died August 7th 2018 at age 94, ending a remarkable and inspiring life of advocacy for equality and democracy. Kappy spent much of the last decade of her life helping to lead Common Cause’s work, as our state board chair from 2009 to 2017, and as a board member until her death. She will be deeply missed.

To honor & continue Kappy’s great legacy Common Cause will create a legislative internship position in her name for the upcoming 2019 legislative session – The Kappy Eaton Democracy Fellow. Click here to contribute to provide a stipend for this position.

Growing up in an era with fewer opportunities open to women, Kappy managed to get an education, graduating with both bachelors and master’s degrees. Starting her career as a journalist in the 1940s, she sharpened research and writing skills she would later apply to advocacy work. Then, as a young mother, she got involved with both the American Association of University Women (AAUW) and the League of Women Voters (LWV), where she learned and strengthened active citizenship skills. As her children grew, Kappy stepped up as a champion of public libraries, eventually getting a degree in library science, and running the Bureau of Governmental Service and Research Library at the University of Oregon for 15 years. In 1998, Kappy played a leading role in the newly-formed Oregon Working Group for Campaign Finance Reform, which led to her joining the board of a group called Money in Politics Research Action Project (MIPRAP), later renamed Democracy Reform Oregon (DRO), which then merged into Common Cause. You can read her obituary here. 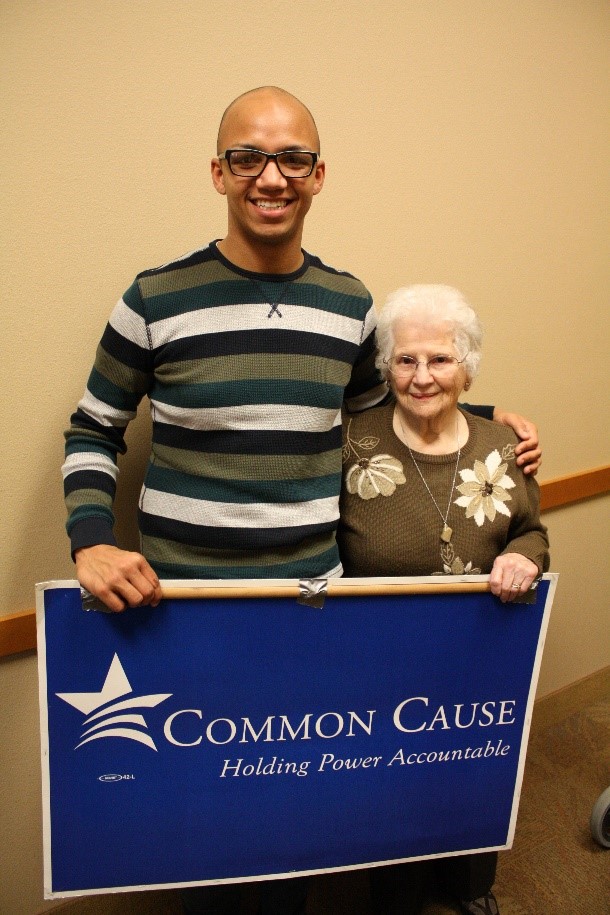 Kappy with fellow board member, Mario Parker Milligan in 2015. They were then the youngest & oldest members of the board.