Last week, Ohio lost one of its most formidable advocates for voting rights and democracy. Margaret (Peg) Rosenfield. She died, according to her obituary, “after a long battle with the Ohio legislature.” Her final letter to the editor was published on the day she died. It reads, in its entirety, “In regard to the primary date, Secretary of State Frank LaRose is right. Move the entire primary to June. Ohio primaries used to be in June.” Powerful, to the point, and urgently necessary.

Peg’s work had an enormous positive impact for voters in Ohio. We share with you below memories of Peg from three who worked with her closely over the years, beginning with Common Cause Ohio’s own Executive Director, Catherine Turcer.

From Catherine Turcer, Executive Director of Common Cause Ohio and former director of Ohio Citizen Action’s Money in Politics Project:

When I was hired to lobby in the late 1990s, I didn’t know anything about lobbying. I cared deeply about money in politics, but I’d never been to the Ohio Statehouse. Peg essentially adopted me and guided me around the Statehouse. She showed me every nook and cranny and the multiple ways around the crypt.  While she introduced me to the Ohio Senate Building, she showed me how to deconstruct a bill and examine every comma. Peg loved language almost as much as she loved voting and democracy and knew “where the bodies were buried” (partial list). Peg was instrumental in passing reforms that we now take for granted. Our first joint lobbying effort was successful and on Dec. 22, 1999, Governor Bob Taft signed the Voter Right to Know Bill into law requiring statewide and legislative candidates, PACs, and political party committees to file their campaign finance reports online.  Peg encouraged me to work on redistricting reform and to that democracy advocates had to be joyfully persistent. 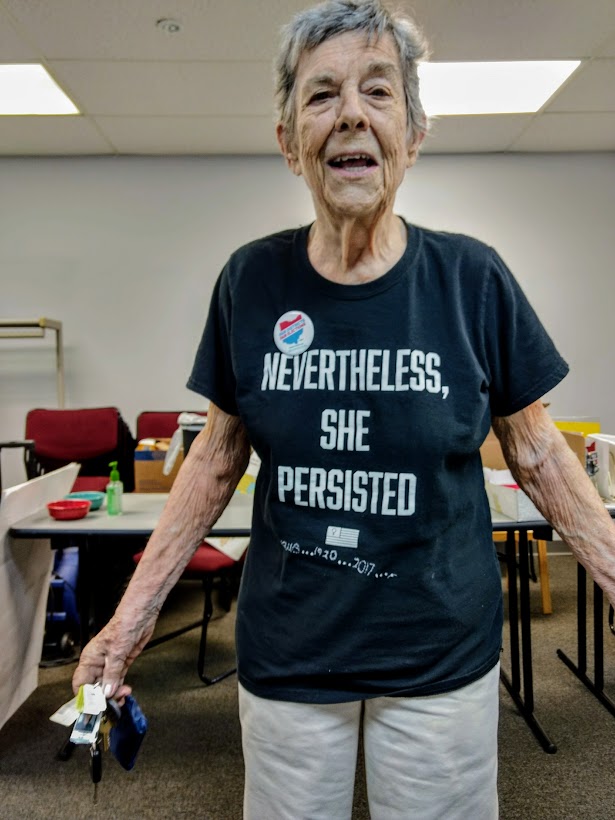 From Scott Britton, former executive director of the League of Women Voters of Ohio, and assistant director of Public Children Services Association of Ohio.

When it came to redistricting, Peg understood that ordinary voters did not appreciate how central the concept is to representative democracy and fairness. She understood why it might be overlooked. After all, redistricting only happens once a decade; it can seem complex and confusing; it doesn’t resonate in the same way that voting rights and campaign finance do. Particularly when it came to ballot initiatives, Peg reviewed them carefully to make sure they were simple, clear, nonpartisan – and avoided unintended consequences. She knew that voters tend to oppose language that is complex or confusing. When a group of democracy-related ballot initiatives was proposed in 2005, it was thanks to Peg’s eagle eye that the League ended up supporting most – but not all – of the measures. Our position was practical, well-reasoned and respected. It was this approach, based on Peg’s eagle eye and iron-clad memory, that helped make the League of Women Voters of Ohio a force to be reckoned with on democracy issues for the last 30+ years.

From Carrie Davis, former executive director of the League of Women Voters of Ohio, and program officer at the Joyce Foundation:

Two of my fondest Peg memories illustrate her uncanny ability to infuse humor with fierce determination, which is a real gift when working on long-term reform.

Anytime we were working on a voter registration issue, be it a bill in the legislature or an SOS or BOE policy, guaranteed that at some point Peg would say, “Guys, it’s not hard. When Sherrod was Secretary, we printed voter registration forms on McDonald’s placemats. They came in covered in ketchup, and we still processed them and got people registered.” It’s one of my all-time favorite examples of making voter registration more accessible.

You can read more about Peg’s life and contributions in this article from the Columbus Dispatch. We hope, in this long slog towards fairness and accountability, you are inspired by Peg to continue your own efforts towards building a fairer, more resilient and reflective democracy.

"As per my two previous emails..."

Updates on Redistricting and Ohio's Primary