“As per my two previous emails…” 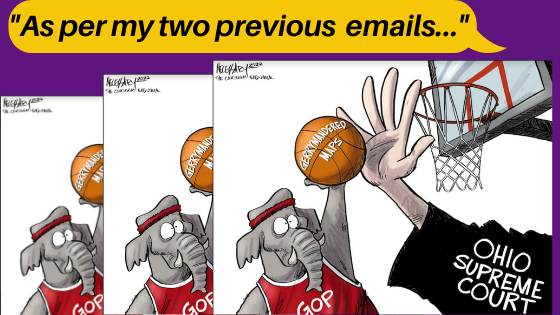 Late last night, the Ohio Supreme Court struck down the third set of state legislative maps drawn by the Ohio Redistricting Commission, once again taking a stand for the Ohio Constitution and all Ohio voters. This is a huge victory in Ohio’s fight against gerrymandering, and an important win in the national struggle for fair districts.

The decision is no surprise, as this third set of maps was rigged to favor one party in exactly the same way as the previous set of maps struck down by the court. The Commission once again had created maps where almost half of the seats in the “D” column were in fact toss-ups, while almost all the “R” seats were safe and secure. In the words of the Court, “The remarkably one-sided distribution of toss-up districts is evidence of an intentionally biased map, and it leads to partisan asymmetry.”

The Court’s ruling shows they have no doubts about the intentions of the map-drawers: “Substantial and compelling evidence shows beyond a reasonable doubt that the main goal of the individuals who drafted the second revised plan was to favor the Republican Party and disfavor the Democratic Party.”

The Court notes that, “The commission has adopted three plans so far, but it still has not drafted one. Staff members of Senate President Huffman and House Speaker Cupp have drafted all three of the plans adopted by the commission.” The Court now mandates that the Commission draft a map together, using an independent map drawer. “To promote transparency and increase public trust, the drafting should occur in public and the commissioners should convene frequent meetings to demonstrate their bipartisan efforts to reach a constitutional plan within the time set by this court.” The new set of maps is due by March 28.

Now that the third set of state legislative maps have been struck down, there is no way for the May 3rd primary to proceed as previously scheduled, at least not for these races. The GOP Commission members were so set on maintaining an unfair advantage for their party, they opted to contradict the Court’s instructions and thumb their nose at Ohio voters a third time. This irresponsible and unconstitutional gambit has cost the state its May 3rd primary. Never mind. A delayed primary is a small price to pay for constitutional maps that could last a decade.

Lots is still up in the air. When and how will the General Assembly establish a new primary date? When will we hear from the Court about Ohio’s congressional map? When will the Redistricting Commission convene again? We will keep you up to date as the news breaks.

Thanks to all the anti-gerrymandering volunteers and activists who have played such an important part in demanding fair maps and insisting the map-makers abide by the Ohio Constitution. Your energy and efforts are making a difference!

PS: Please enjoy the following smackdown: “As a final matter, we note that Senate President Huffman appears to have voted against the Sykes-Russo plan based, at least in part, on a misunderstanding of Section 6(A). Invoking Section 6(A), Senate President Huffman criticized the Sykes-Russo plan because, he said, it would have made it hard, if not impossible, for some Republican incumbents to retain their seats. Making that observation demonstrates, beyond a reasonable doubt, that Senate President Huffman misunderstands the requirements of Article XI and the reasons for their adoption. Currently, the General Assembly is marked by extreme disproportionality, with the Republican Party holding substantial majorities in both the Senate and the House. The district plan that facilitated that disproportionality was the basis for the adoption of Article XI. Senate President Huffman’s concern for protecting incumbents is not grounded in Article XI.”

What the Ohio Redistricting Commission should look for in a mapper