As a second of Albany’s powerful “three men in a room” has been arrested on federal corruption charges, the need to combat and prevent corruption in Albany could not be clearer.

In response to the recent criminal charges against Senate Majority Leader Dean Skelos, Common Cause New York analyzed New York State Board of Elections campaign data on contributions made by the New York City luxury developer Glenwood Management Corp and its affiliates. The breakdown of the company’s contributions tell a striking story.

According to recent charges made by the United States Attorney’s Office, Senator Skelos “is accused of illegally obtaining a $20,000 payment for ADAM SKELOS from a large real estate developer dependent on DEAN SKELOS for tax breaks.” This large real estate developer, identified as “Developer-1” is understood to be Glenwood Management, founded by Leonard Litwin. Glenwood is also understood to be the company identified as “Developer-1” in the criminal complaint that caused Sheldon Silver to step down from his once powerful position as Assembly Speaker. The Skelos complaint shows how the multiple Limited Liability Companies, or LLCs, controlled by Glenwood can be used to coordinate and bundle hundreds of thousands of dollars of campaign contributions in order to buy favorable policy outcomes and tax breaks. This ongoing corruption is made possible because Glenwood, through its aggressive use of its LLCs, is effectively not subject to any campaign contribution limits.

Refer to this brief for more detailed analysis, charts and tables. Background data is also available.

A Clear and Disturbing Trend 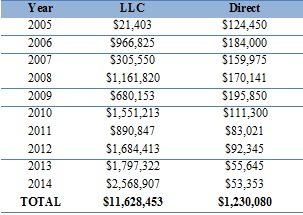 Our analysis shows how from 2005 through 2014, Glenwood Management contributed over $12.8 million to New York State candidates and committees. But, direct contributions made by the company itself, or through individuals such as Litwin, made up only 10% of the spending overall– the rest were made through dozens of individual LLCs that are registered in either Glenwood’s name or at Glenwood’s New Hyde Park address. 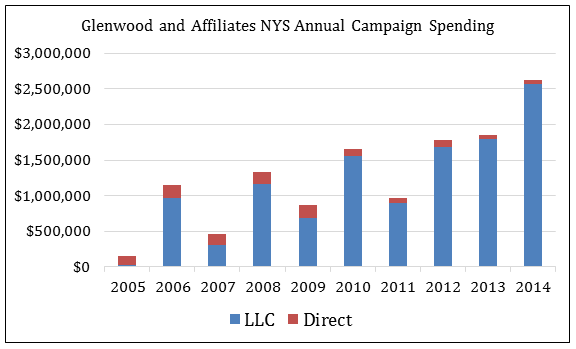 This consistent increase over the past 10 years in LLC giving, with a concomitant diminution in direct giving, clearly illustrates how the real estate industry continues to consolidate power and wield outsize influence over our elected leaders through its prolific use of limited liability companies. Policy agendas for important issues like the 421a tax abatement and New York City rent laws are being set by publicly elected leaders who have become dependent on the real estate industry’s onslaught of millions of dollars in campaign contributions.

Senator Skelos, through his Friends for the Election of Dean Skelos committee, received at least $100,000 from Glenwood. Only 5% of the contributions were made directly by Glenwood Management or associated individuals; LLCs made up the $95,000 difference.

It is also worth noting that Senator Michael Ranzenhofer, Chair of the Corporations, Authorities and Commissions committee in which S60, a bill to close the LLC loophole, is currently pending, received almost 94% of the total $101,000 in Glenwood contributions to him through LLCs.

Dozens of Contributions per LLC

The way the real estate industry is organized, with separate LLCs for each development, allows the industry a particularly strong position to take advantage of the LLC loophole. Glenwood’s LLCs are named for the many buildings they have developed and operate, but they are all registered at the company’s New Hyde Park address. 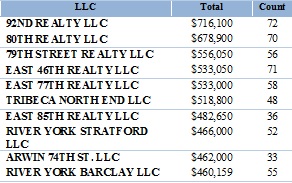 To the right are the top 10 LLC contributors to state campaigns and committees. 92nd REALTY LLC is likely linked to Glenwood’s “The Brittany” at 1775 York Avenue and 92nd street, which is a recipient of the highly lucrative 421-a tax abatement.

Our analysis underscores how unlimited campaign contributions-as limited liability companies effectively have no limits-warp our elections and result in important policy decisions being driven by the demands of wealthy special interests. Such unlimited contributions and influence fuels public corruption scandals that will continue to rock the foundations of our state Capitol until the LLC Loophole is closed and Fair Elections through public financing is adopted.

Data for this analysis came from campaign finance disclosures filed with the New York State Board of Elections from 2005 through 2014. All dollar amounts were tallied from Schedule A, B, C, and P. Each individual LLC was identified by its registered address, which is the same as the Glenwood Management Corporation in New Hyde Park, NY. We counted fifty LLCs from the 191 different spelling variations by cross-checking with the Department of State’s Corporation and Business Entity Database.

Limited Liability Companies (LLCs) are used by a wide variety of industries to circumvent the $5,000 annual corporate contribution limit in New York State campaign finance law, relying on the New York State Board of Elections’ 1996 determination to treat LLCs as individuals, subject to a $150,000 annual contribution limit. As a result, companies are able to donate hundreds of thousands of dollars to individual candidates, in some cases donating over $1,000,000 annually to an individual gubernatorial candidate. Glenwood Management is cited in numerous analyses and press reports for its aggressive use of the LLC Loophole; it also figures prominently in both the U.S. v. Sheldon Silver and U.S. v. Dean and Adam Skelos federal public corruption complaints.

Common Cause New York is an active member of the Fair Elections Coalition, working for the passage of a broad package of campaign finance measures, built around a core of small donor matching fund public financing of elections. Last month, Common Cause New York joined with other government watchdog groups in calling on the NYS Board of Elections to reverse its 1996 Advisory Opinion in which it adopted an ill-advised interpretation of the campaign finance law and opened up the LLC loophole. Bills to close the LLC loophole are advancing in both houses of the Legislature, with S60 sponsored by Senator Daniel Squadron pending in the Corporations Committee and A6975B sponsored by Assembly Member Brian Kavanagh awaiting a floor vote in the Assembly.

Deadlock Results in No Action: NYS Board of Elections Fails to Close LLC Loophole