NEW YORK, NY (06/15/2015)—Education unions and public school allies have been large political spenders in New York for decades, but during the ten year period from 2005 to 2014, their political dollars have been matched and recently over-taken by wealthy individuals and an interlocking set of advocacy and policy organizations pushing for market-based educational approaches.

New Yorkers find themselves trapped in an ongoing tug-of-war over education funding and policy, with total aggregate union spending during the 10 year period topping $205.4 million compared to $93.3 million by pro-privatizers. But the source of the funding and how it is spent is very different between the two sides.

Common Cause/NY’s report, “Polishing the Apple: Examining Political Spending in New York to Influence Education Policy,” analyzes efforts to influence the debates around education policy and funding.  Union money is contributed in smaller amounts by tens of thousands of union members, while privatizer money comes in large amounts from fewer than an estimated 400 individuals and organizations. Privatizers give most of their money directly to political parties and candidates, while unions give relatively little directly to candidates, spending big on organizing their members and reaching voters instead.

The manner in which the two sides raise and spend the extraordinary amounts of money they flood our political system with to try and influence education policy is strikingly different,” said Susan Lerner, Executive Director of Common Cause/NY. “The large direct campaign contributions which pro-privatizing interests made to the Republic Senate Housekeeping Account and to the Cuomo-Hochul 2014 campaign appear to have paid off in bills that favor the wealthy much more dramatically than similar bills in other states. Our research highlights the need to reform New York’s campaign finance system, lobbying laws and legislative process. New Yorkers do not want education policy – or any important policy issue – held hostage to the demands of wealthy and special interests.” 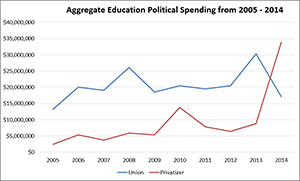 The aggregate political spending by education unions, including campaign contributions, independent expenditures, and lobbying, from 2005 through 2014 totaled $205 million. 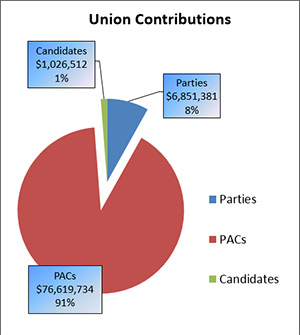 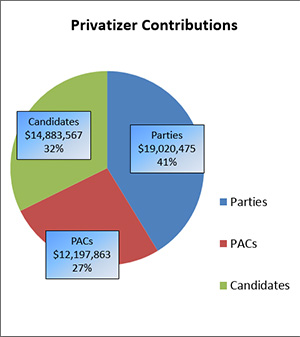 The pro-privatization bills introduced in New York are based on bills developed by the American Legislative Exchange Council as part of its national education agenda.

While Common Cause/NY takes no position on education policy, we strongly believe that the final decision should be based on objective analysis and not unduly shaped by the well-funded lobbying and publicity efforts, as well as political spending of any supporters of one position or another. Discussion of education policy and programs should take place out in the open, following public hearings with testimony from both experts and interested members of the public and an independent analysis of the true costs and potential risks and benefits of each proposed scheme.

The full report is available here